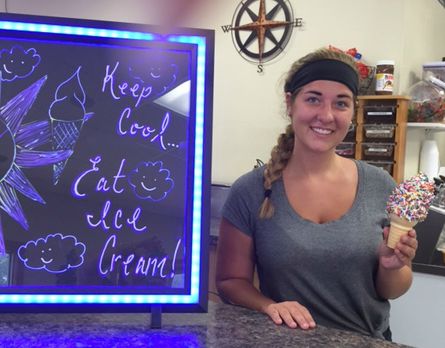 It's not every business administration student who can find the means and the motivation to start up her own business before she's even graduated from college. But Emily Zanette, 20, had been dreaming of entrepreneurship before she ever set foot on the Northampton Community College campus.

Earlier this year, her dream came true when Zanette opened her own shop, Emmy Lou's Ice Cream Café, in Pen Argyl. "I always knew that being my own boss was what I wanted to do, but I didn't know which business I wanted to do that in," she says.

That is until her father, who owns and operates Zanette's Grill in Nazareth, told her about an opportunity to purchase an ice cream parlor that was for sale. It seemed like a natural fit for her.

"I had learned a lot about the restaurant business from my dad, working for him for four years," she says, "and I love ice cream!"

Zanette had enough start-up capital ("I've been a saver for as long as I can remember") and good enough credit to get a small business loan. Her shop opened on January 2, and business has been great.

"I didn't expect it to do as well as it did initially, since I opened in the winter. But I was surprised how many people came out, and we're getting more each month. That's exciting."

Zanette says she's received a lot of support from both her family and the Pen Argyl community. She gets a lot of repeat business from customers who "give me advice about what's good and what can be improved upon."

The menu of ice cream cones, sundaes and milkshakes expanded recently with the addition of raspberry soft-serve, which has proven to be her most popular item. Also a hit are Zanette's brownie sundaes and mocha sundaes, topped with chocolate-covered coffee beans.

The menu will get even more of a boost next month - Zanette has acquired an adjacent property, and will expand both her square footage and her menu to include bagels, sandwiches and other lunch items. 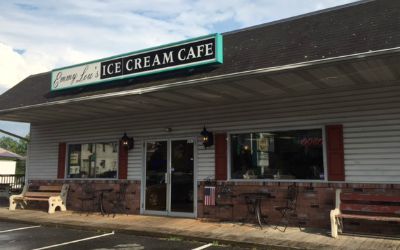 She plans to graduate in 2016, having taken a brief hiatus in her classes to get her business off the ground. Zanette is already thinking of the future after graduation, hoping to open other restaurants, or possibly buy and flip houses as rental properties. She also hasn't ruled out going on for a four-year degree.