Journalism About and for You 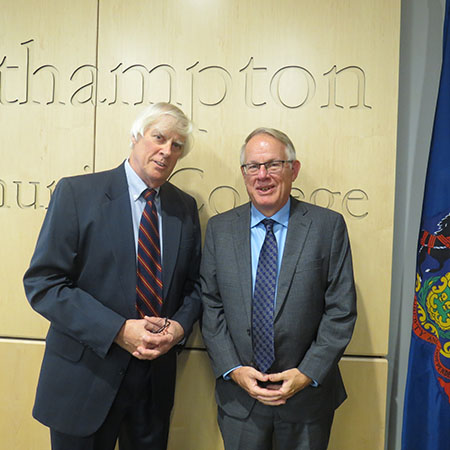 “The job of a journalist is to put the most accurate information in front of the whole community and have the whole community at the table,” said  Chris Satullo, at Northampton Community College (NCC), where he discussed “Fixing Democracy: Putting People Back into Policy” on September 26.  As he does as a journalist, Satullo engaged audience members, asking them questions and listening to their answers as part of his highly interactive talk.

Satullo is a co-founder and co-director of the PA Project for Civic Engagement and serves as civic engagement consultant to the Committee of Seventy, in which he leads a statewide project on gerrymandering called Draw the Lines PA.

Previously, he was vice president for news and civic dialogue at WHYY public media in Philadelphia, where he started the NewsWorks.org website and radio programs such as The Pulse and NewsWorks Tonight. Before WHYY, he served as editorial page editor and columnist at the Philadelphia Inquirer.  At the start of his career, he worked at The Express.  He has won more than 60 awards for columns, editorials, reporting, and civic engagement.

Civic engagement has motivated Satullo from the beginning.  His love of journalism was inspired four decades ago by the movie All the President’s Men, based on the investigative journalism of Carl Bernstein and Robert Woodward, whose reportage on the Watergate scandal led to the resignation of Richard M. Nixon.  “I, too, could protect democracy,” the young Satullo thought.  After forty years, Satullo retains his optimism, but expresses deep frustration with today’s blurred lines between factual reportage and opinion.

Moreover, Satullo believes that news media have fallen into “bad habits,” including an investment in conflict, the more strident, the better; news outlets as fortresses for professionals; panic over low ratings; the practice of offering anonymity to sources who don’t need it, and  other practices. He said that the business model of traditional journalism is being undercut by the advertisement-based financial framework supporting Facebook.

While he sees discouraging signs, Satullo is nonetheless energized by solutions underway.  He quoted another journalist, Tom Rosenstiel, who said, “the main job of journalists is to help the public life of their community go well.”

In order to do this, reporters must care about the community they are covering, Satullo said.  News stories should not only report on residents, but be guided by what the residents feel they need to know.  For example, documenters.org trains people to use cameras to extract input from their communities.  KPPC, a National Public Radio station in Pasadena, California, considers their news to be about and for the community.  The internet-based Hearken invites listeners to offer ideas and be part of a team telling their own stories.  By being hyper-local, New Jersey News Commons gathers stories about people doing constructive projects in their towns and cities all over the state.

Satullo has created several of his own community-involvement projects.  Draw the Lines PA fights gerrymandering by giving Pennsylvanians tools to draw their own state’s Congressional maps online.  Previous Satullo innovations include Great Expectations (2007), meetings in which Philadelphia voters determined the questions put to mayoral candidates and City Budget workshops (2009) which invited Philadelphians to be “mayor for a day,” by providing their own input about their city’s budget. In cooperation with the African American-owned station, WURD, the Mind the Gap series documented the healthcare disparities between the black and white communities in Philadelphia.  After Sandy: Ready for the Next Time? asked New Jersey shore residents how they wanted to rebuild their communities after the hurricane.

Satullo holds that great, responsive journalism still exists, but is on an “incredibly fragile financial platform.”  It is up to young journalists, he said, to invent new ways of delivering news.

This event was sponsored by The Commuter, NCC’s student news organization.