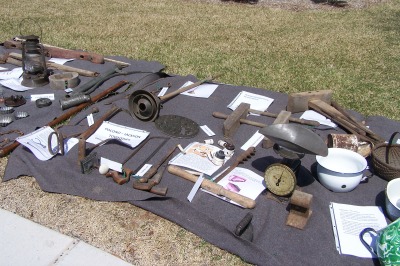 It could have been a family reunion.  The audience at a series of talks about the history and the future of Monroe County excitedly traced family links to each other and recalled memories while waiting for talks about Monroe County to begin.  It seemed that everyone knew or shared some ancestors in this region that they clearly and dearly love.

The event took place on a beautiful Saturday morning, April 18, at the Monroe Campus of Northampton Community College in Tannersville.

Jim Werkheiser, of the Pocono Jackson Historical Society, a lifelong Pocono area resident, gave the first talk, "The Earliest Settlers of Pocono Township: From 1737 - 1800. He began with early inhabitants-members of the Lenni Lenape tribe-- and the infamous Walking Purchase, a hoax perpetrated by sons of William Penn. His hand-drawn maps showed the "expected" route, the distance agreed to by the Lenape and the Penns: the distance average walkers could cover in a day and a half, as contrasted to the far greater area actually traversed by exceptionally strong young men trained to "sprint" at a 3.7-miles-per-hour clip.

In 1750, Johannes Learn, an immigrant from the Rhineland, established a tavern here that became the social center of a community.

Among many other local historical events, Werkheiser also talked about the railroad operating from 1893 until 1939 and the Glenwood Hall Band, which performed from 1888 until the mid-1940s.  Werkheiser has a special connection to the band: many of his relatives played in it.

John Frailey, also a lifetime Monroe resident, talked about the Gantzhorn Farm, the site of the present Monroe Campus.  A Gantzhorn family genealogy originated with David Gantzhorn, a German immigrant born in 1808.  David's son, John D. Gantzhorn, purchased 165 acres of land at the age of seventeen.  Remarkably, he cleared and cultivated 165 acres of rocky woods, with the help of some of his thirteen children.  The purchase price for the land?  $15.

Frailey knows the Gantzhorn property well: he and his wife purchased 95 acres of the land in 1998, establishing a farm.  In 2005, the Fraileys sold most of this acreage to Northampton Community College for a new campus.  They are delighted with their decision.  "The campus is beautiful and state-of-the-art," Mr. Frailey said.

Steve Hughes, an educator with the Penn State Cooperative Extension, talked about Monroe County's present and future.   "Monroe County has 349 active farms," he said, also noting that  97% of American farms are still family-owned.  He detailed some challenges agriculture in Monroe County faces: an aging farmer population, land lost to development, the high costs of starting a farm, and reduced water caused by climate change. Nevertheless, he sees promise for the future: the thriving tourist industry brings in people who buy local produce to take home; increasing ethnic diversity and a desire for a wider range of ethnic food; and a growing public desire for fresh, organic food.  Other current positive trends, he said, are agritourism, community supported agriculture, and the popularity of farmers' markets.

He encouraged young people to choose agriculture as a profession.  "There are more than 300 career possibilities in agriculture-related fields," he said.  He gave as examples veterinary studies, food sciences, and engineering technology as related to farming.

The day's events were part of Northampton's year-long exploration of Agriculture and the American Identity.  It was co-sponsored by the Pocono Jackson Historical Society and the Northampton Community College Monroe Campus.

Like Johannes Learn's 18th-century tavern, the new Monroe Campus is a community hub, as illustrated by the activity on campus that Saturday morning.  While the audience for the NCC Monroe history event filed into one classroom, participants in a local organization's spirituality conference met in a room next door.  A sign outside Keystone Hall advertised a dance event taking place simultaneously.  Whether from old farming families or from newly arrived ones, people enjoy gathering at the NCC Monroe Campus.