Our grads transfer and excel!

Two alumni of Northampton Community College (NCC) have been chosen for the honor of giving the student graduate commencement addresses at their alma maters Lehigh University and Moravian College.

Matthew Dragovich '09, NCC, who will receive his doctorate in mechanical engineering from Lehigh, discovered a zest for learning at Northampton.  "NCC got me 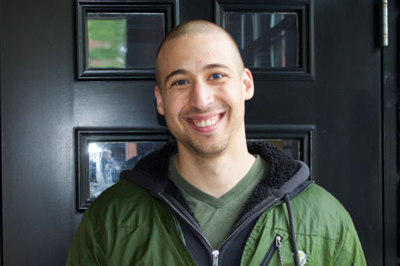 started," he says.  "My professors were very dedicated.  Professors Bill Doney, Alexander Rolon and Brett Langely are among the best professors I've ever had anywhere."

Lifen Yang, math/computer coordinator at the NCC Learning Center saw his potential and determination from the way he availed himself of the Learning Center's drop-in math tutoring.  "He basically lived in the math walk-in," she says.  "I am very proud to have been a part of his early journey.  That always makes me think about the students we work with today.  They will leave here and make a difference in the world."

In July he will enter a post-doctoral program at New York University's Langone Medical Center, with the goal of researching treatments for melanoma.  He knows that his training in mechanical engineering will stand him in good stead.  He explains that an area he has studied, the interactions of proteins, involve mechanics and that some cancer treatments involve blocking antibodies.  "Cell interaction starts with mechanics; it is how cells sense their environment," he says.

Angelo Fattore '14, NCC, who will receive his bachelor's degree in management from Moravian, originally had some hesitations about attending NCC. "I thought it was going to be high school all over again," Fattore admitted. "Until I found out very quickly it wasn't. I had classes where I was challenged and pushed to go above and beyond."

Gary Guidetti, now assistant dean of business and technology, was one of Fattore's professors. "What I remember most about Angelo was his desire to take a leadership

position in the work we were doing throughout the course. He was well respected by his classmates and would always make time for those who would come to him for advice or help."

Fattore's helpful attitude made an impression on his fellow Moravian classmates. He was elected by them to serve as the student speaker for the class of 2017. During his college years, he had the opportunity to intern with several local companies: Lehigh Valley Economic Development Corporation, OAA Orthopaedic Specialists, Just Born, and Lehigh Valley with Love. He also spent time in Dublin, Ireland, interning at Balls Media, one of the country's leading sports media outlets.

After graduation he will begin a job search but still plans to be involved and give back to his alma maters. Currently Fattore serves on NCC's Alumni Board.

"It doesn't matter that I've graduated. I'm still a part of the community. I'll always be a Spartan and a Hound," Fattore said.