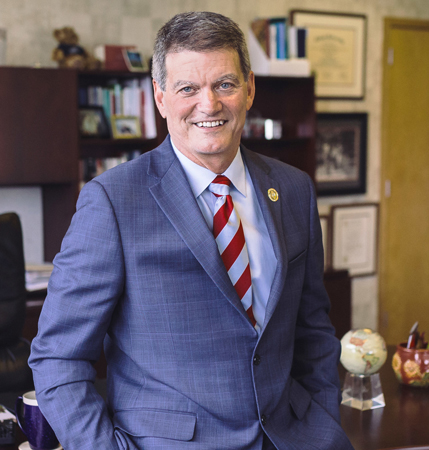 The Pennsylvania Commission for Community Colleges (PACCC) announced on May 14 the recently elected officers to the Executive Committee of its Board of Directors. The Executive Committee leads the PACCC Board of Directors in determining the statewide direction and policy interests of its 14 community colleges. Dr. Mark Erickson, president of Northampton Community College (NCC), was elected to serve as the vice chair.

Executive Committee members serve two-year terms, which begin July 1, 2019. The other college presidents and local business leaders who have been nominated and approved by the PACCC Board of Directors to the Executive Committee are:

“These individuals are highly respected within their community, deeply invested in our mission, and profoundly dedicated to the success of Pennsylvania’s 14 community colleges,” said Elizabeth A. Bolden, president and CEO of the Pennsylvania Commission for Community Colleges. “These Executive Committee members understand how critical it is to leverage the expertise and experience of community colleges to increase the workforce readiness skills and educational attainment level of Pennsylvanians, which in turn generates a productive workforce and vibrant economy.”

In the 2017-18 academic year, Pennsylvania’s community colleges enrolled more than 300,000 students from all 67 counties in the Commonwealth. They also provided a foundation for nearly 35,000 students who sought transfer to four-year institutions, saving these students up to $20,000 on the cost of higher education.

Mark H. Erickson Ed.D., became the fourth president of Northampton Community College on July 1, 2012, driven by a strong belief that the most innovative, exciting and important work in higher education was, and is, taking place at the nation’s community colleges. A native of Nebraska, Dr. Erickson holds a bachelor’s degree in American history from Princeton University and a master’s degree in education from Harvard University. While earning his doctorate in educational leadership at Lehigh University, he received the Mathew W. Gaffney Award for Academic Excellence. He served in several important positions at Lehigh, including dean of students from 1990-1999, associate vice president and executive assistant to the president from 1999-2001, and vice president for administrative and government affairs from 2001-2005.

In 2005, he was named president of Wittenberg University, Springfield, Ohio. During his seven years there he was credited with facilitating the development of new academic programs, expanding international exchange opportunities, and fostering a close and mutually beneficial relationship with the regional community. Under his leadership as president of Northampton Community College, the institution has thrived. The college was selected as one of the top 150 community colleges in the nation by the Aspen Institute in 2014, the same year NCC opened a new $72 million 84-acre campus in Monroe County, Pennsylvania.

“Community colleges are vitally important to providing accessible higher education and workforce training in the state of Pennsylvania,” said Erickson. “The Pennsylvania Commission for Community Colleges has long advocated that community colleges are not only essential to a healthy, vibrant economy, but they are often the only chance at higher education for many of the state’s residents. I am looking forward to working with my colleagues and the Commission to ensure our students and the communities we serve are successful for years to come.”