New Approaches to the News Business

Read All about It! 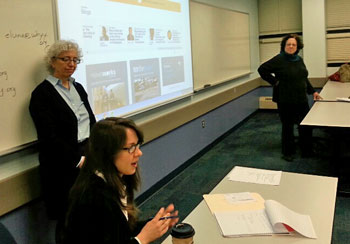 What do you get when you put three journalists in a classroom full of journalism students? A lot of curious people.

That was evident on March 31 when Rob Hays, the head of Northampton Community College's journalism program, invited three members of public radio's Keystone Crossroads project to speak to a Journalism 101 class about public radio's role in today's news media mix.

Naomi Starobin, Elisabeth Perez-Luna, and Marielle Segarra of Philadelphia's public media station, WHYY, were all in Bethlehem to help host a community forum on the challenges facing the Lehigh Valley and possible solutions to those dilemmas.  They met with the journalism students before the evening meeting at NCC's Fowler Family Southside Center.

As editor of the Keystone Crossroads project, Starobin explained that its focus is providing statewide reporting on issues pertaining to urban decline in Pennsylvania and possible solutions.  In addition to WHYY, three public media stations from other parts of the state are involved in the collaborative effort.  Community forums like the one held in Bethlehem are a way to bring people together to discuss the issues.

Hays described the Keystone Crossroads project as a form of "civic journalism," and noted that there has been some debate about whether it is appropriate for journalists to "insert themselves" into public affairs rather than reporting from the sidelines.

"Our mission is not to change the cities," Starobin said," but to stimulate conversation and activism. People tend to be isolated, but many of them care about the same things. When they find each other, magic happens."

Students were curious about how WHYY is funded.  Although it is considered "public media," only 4-5% of its budget comes from the government, Starobin said.  Contributions from listeners, generated during pledge drives, cover 50-60% of the costs.  Advertising is prohibited, but companies and organizations who want airtime can become underwriters and are acknowledged through the simple wording "Support for NPR comes from...."    Because public radio audiences tend to be well-educated, have relatively high incomes and are active in their communities, exposure on air or on WHYY's website is perceived to have high value, according to Starobin.

Students also asked the staff from WHYY what it is like to be a radio journalist and how to break into journalism.  "We are all voraciously curious," Perez-Luna said with a chuckle.  Segarra acknowledged that not everyone is comfortable talking with strangers, but she assured students that people with many different types of personalities can be successful.  "There is no one way to ask questions," she said.

The answers varied, but several students mentioned Vice News in addition to NPR, surfing the Net, daily papers (in paper form) and network news.  Asked whether they listen to news while commuting, many said they prefer to tune into music on Pandora.

Perez-Luna advised the members of the class who are seriously considering journalism as a career to "write, write, write all the time," whether for publication or just for themselves, and to think about the power of sound in storytelling.  "Your iPhone is actually a recording device," she said.  "Start collecting material."

She encouraged everyone in the class to follow the news.  "The more you know, the less you can be manipulated," she said.