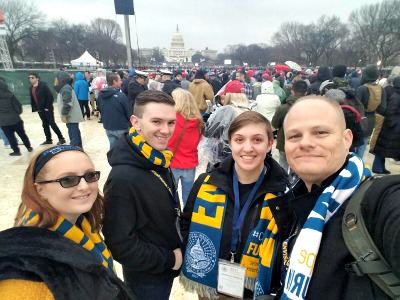 If you remember your eighth-grade Latin, you probably recognize the imperative "Carpe Futurum."  If not, you can expect NCC criminal justice major and Phi Theta Kappa member Amber Hess and her cohort of Summit Scholars to follow this dictum (translated at the end of this article).

From January 18-22, Hess participated in the Envision Presidential Inauguration Leadership Summit, a gathering in Washington, D.C. "designed to empower next-generation leaders as they continue on their journey toward realizing the power of their potential."

This year marks the ninth Envision Presidential Inauguration Leadership Summit, for middle school, high school and college students from around the country. Each summit, held in Washington, DC, is timed to coincide with a presidential inauguration. Students have attended these events and the inauguration ceremonies of Presidents Barack Obama, George W. Bush, Bill Clinton, George H.W. Bush, and Ronald Reagan, and on January 20, 2017, that of Donald Trump.

"The summit was intellectually rigorous," says Hess. On the go from 4:45 a.m. to midnight, students packed in activities such as conferences, a speakers' panel, workshops, and meetings with their peers. As Change Delegates, participants met in smaller and larger groups to generate possible solutions to national and global problems. As part of the collegiate division, Hess worked with a Change Delegation group to formulate ideas for reducing the national debt. At the inaugural ceremony, Hess and other Summit Scholars sat on the Mall, with a good view of the Capitol Building.

"The speakers were personal, uplifting and empowering," Hess says. Powell inspired her the most. "He told us to be leaders, but also to be people in whom others can invest their trust. He encouraged us to focus on our studies and our passions, to pay attention to today and tomorrow; then our long-range goals would fall into place."  In addition, she learned about women's empowerment from Wambach and being a voice for those who are afraid from Yousafzai.

Washington on Inauguration Day reminded Hess of New Year's Eve in Times Square. "The city was packed," she says.

Hess became involved with the Envision organization between third and fourth grades at Palmer Elementary School, in Palmer Township. She attended an Envision summit in a suburb of Washington, D.C. and was nominated and chosen for the Presidential Inauguration Leadership Summit from among Envision alumni through a highly competitive process.

Hess now plans to pursue her bachelor's and master's degrees at the Florida Institute of Technology, where she will study forensic psychology, and is considering a career in homeland security. In addition to taking courses, she explored criminal justice as an NCC intern with the Bethlehem and Easton police departments.

"The summit was amazing, and I will always remember it," Hess says. The inauguration ceremony left an impression on her. "No matter what our group's different political views, we got to witness a historic rite, the peaceful transfer of power."

Moreover, the five-day event left Hess feeling empowered. "You can have a say in what happens in the world. You can be a leader and change the future for the better."

So, what does "carpe futurum" mean?  The motto of Hess's change delegation, it means "seize the future."  This is what Hess and other Summit Scholars are determined to do.