"As the child of immigrants, I thought I knew about adversity, grit and determination," said Pulitzer Prize-winning journalist Sonia Nazario at Northampton 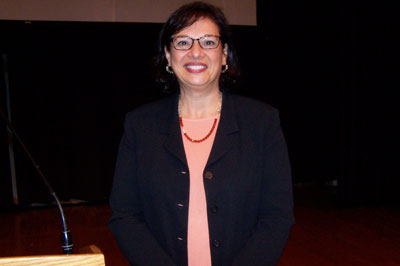 Community College's Sixth Annual Peace and Justice Conference and Cohen Memorial Lecture on October 15.  Both sides of her family had fled to Argentina: her father's Christian family to escape persecution in Syria, her mother's Jewish family to escape anti-Semitism in Poland.  When Sonia was thirteen, her father suddenly died, leaving a wife and children in Kansas, where the Nazarios had immigrated.  Missing her native country, Nazario's mother soon returned to Argentina in the midst of the "dirty wars," in which thousands of Argentinians, including Nazario's friend, were "disappeared," kidnapped and murdered.  One day, Sonia and her mother passed a pool of blood-that of journalists slain by the Argentinian military.  "Why were they killed?" Nazario asked.  "For telling the truth," her mother replied.  Nazario decided that she, too, would tell the truth: she became a journalist.

She never thought of questioning her own life's struggles until her Guatemalan house cleaner told her about her four children, still in Guatemala, who depended for survival on their mother's earnings.  Nazario was shocked to learn that mother and children hadn't seen each other in twelve years.  She talked to other undocumented Mexican and Central American immigrant mothers.  "I take care of other people's children, but I wasn't there to see my son's first steps or hear my daughter's first words," Nazario heard again and again.

"I'll be back in a year or two," the mothers told their children.  But the years stretched into many more, as the women worked two or three jobs, squeezed into apartments with three other families, and slept in converted garages, all the while sending money home.

Their children, despairing of the mothers' return, began jumping aboard moving trains to reach the United States border.  Forty-eight thousand children a year, some younger than seven years old, set out, unaccompanied by adults.  In "Enrique's Journey," Nazario focused on one sixteen-year-old Honduran boy who crossed four countries, with his mother's phone number tucked into his shoe, trying eight separate times to reach her.

Like thousands of other children, Enrique found himself hunted by bandits, robbers, rapists, and murderers lying in wait along the tracks.  Knowing about these atrocities crushed Nazario's faith in humanity.  Yet, her belief in people restored itself in Vera Cruz, where dozens of women earning $1 a day threw bundles of food to the children, as the trains slowed rounding curves.

In addition to the ever-present danger of victimization and falls from trains, the children encounter U.S. and Mexican border guards ready to deport them.

What drove these children to risk their lives in this way? Nazario asked.  In addition to seeking their mothers, "most are driven from their homes by violence," she said.  Fueled largely by American demand for illegal narcotics, criminals have joined hands with drug cartels to force children into conscription, reaching even into elementary schools.  Youngsters who resist face certain torture and murder.  For this reason, Nazario considers these imperiled children refugees, rather than migrants.

She criticizes the Obama administration for sending most of the escapees back to the countries they fled. Ninety percent are returned to Mexico, Guatemala, 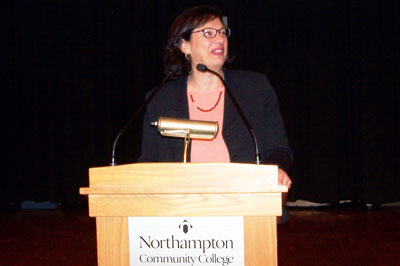 Honduras, or El Salvador.  While the U.S. judicial system allows children to claim persecution, almost none of them have attorneys.  "Seven-year-olds and toddlers stand shaking before robed judges," she said.  Moreover, the children are allowed one week to complete a process that in reality takes a year.  Within 24 hours of their return, many refugee children are murdered by the drug traffickers they temporarily escaped.

Nazario did far more than interview Enrique and others.  She lived their journey, riding atop the trains alongside children clinging to the sides and roofs, hopping as they did, between rumbling trains.

The journalist has become an advocate for the children.  What can we do to save these young lives?  "We have been using the same three approaches that don't work," she says.  These include border control, a guest worker program and legalization.  Instead, she recommends these policies:

On October 11 Nazario published an article about refugees in The New York Times.  For more information about Nazario's efforts in collaboration with moveon.org and to get an update on Enrique and his family, go to Enrique's Journey.com.

A daylong event, the Peace and Justice Conference also included a fifty-year tribute to LEPOCO, the Lehigh Valley-Pocono Committee of Concern and the showing of Which Way Home, a film about unaccompanied child migrants from Latin America.

In the lobby of Lipkin Theatre, a photographic display, Vietnam Today by Greg Nelson, showed scenes of daily life in Hanoi.  A caption read "Fifty years ago, in 1965, 7 million tons of bombs and toxic herbicides were dropped on five million acres in Vietnam.  "The war cost the lives of over 500,000 civilians, and millions of Vietnamese became refugees from their homes."   Today, Vietnam sells $35 million of goods annually to America."