Rebel with a Cause

Molewski has never forgotten where he came from, or the transformative power of education. 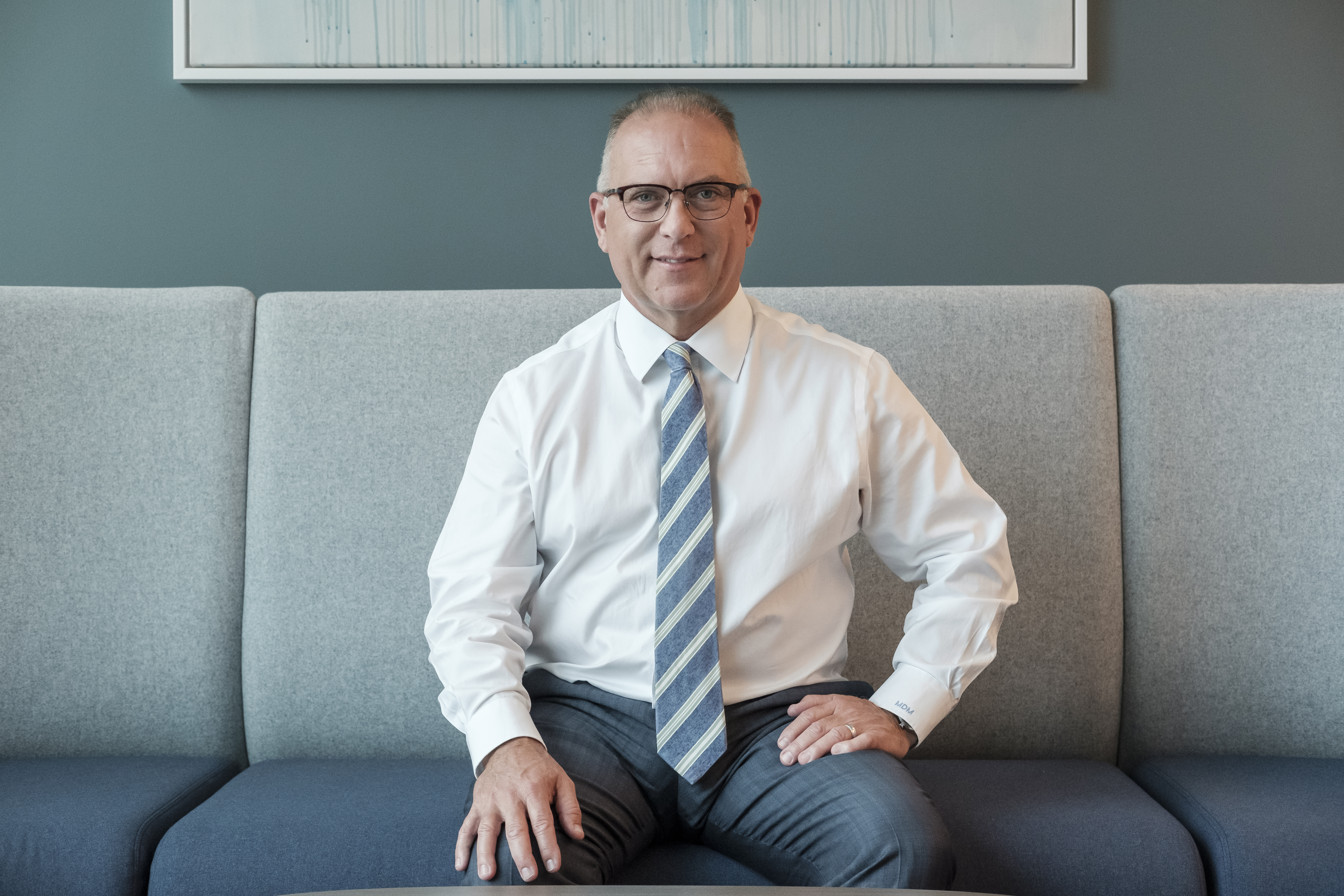 At the time, he and his six siblings were living with their mother and stepfather in a trailer behind his grandmother’s house in a small town in the Poconos.

They had moved there several years earlier when they could no longer afford the rental fees at the trailer park where they’d been living.

“We tore down a house that was probably 100 years old in town, and we reclaimed all the lumber and built the new house with all the old lumber,” Molewski recalls. “For my brother and I—I was 12, he was 14—that was our summer job, building a house with our stepfather.

“I learned how to carry cinderblocks and pull nails out of wood while other kids were going swimming and riding a bike.

“That was real hard,” he says. “But we learned how hard it would be to make a living without having a proper education. I realized then that it would be a really good idea to go to college.”

And he did, becoming the first member of his family to attend college. Molewski graduated with a double major in economics and psychology from King’s College in Wilkes-Barre, Pa., in May 1984, and went to work for a financial services company in Bethlehem right out of college.

He married his high school sweetheart, Diane, three months after graduation, in August 1984. They were both 21.

By the time he was 24, Molewski’ s entrepreneurial spirit kicked in and he started his first financial services firm with a business partner. Diane would frequently help out, sometimes with their first daughter Amy in tow. (Amy now works with her dad at CAPTRUST. The Molewskis also have two other grown daughters, Kelly and Melanie.)

Molewski later went on to create MFP Strategies in 2000. By the time he and his partners merged with the nation’s largest registered investment advisory firm, CAPTRUST, in 2015, MFP had more than $5 billion in assets under advisement. 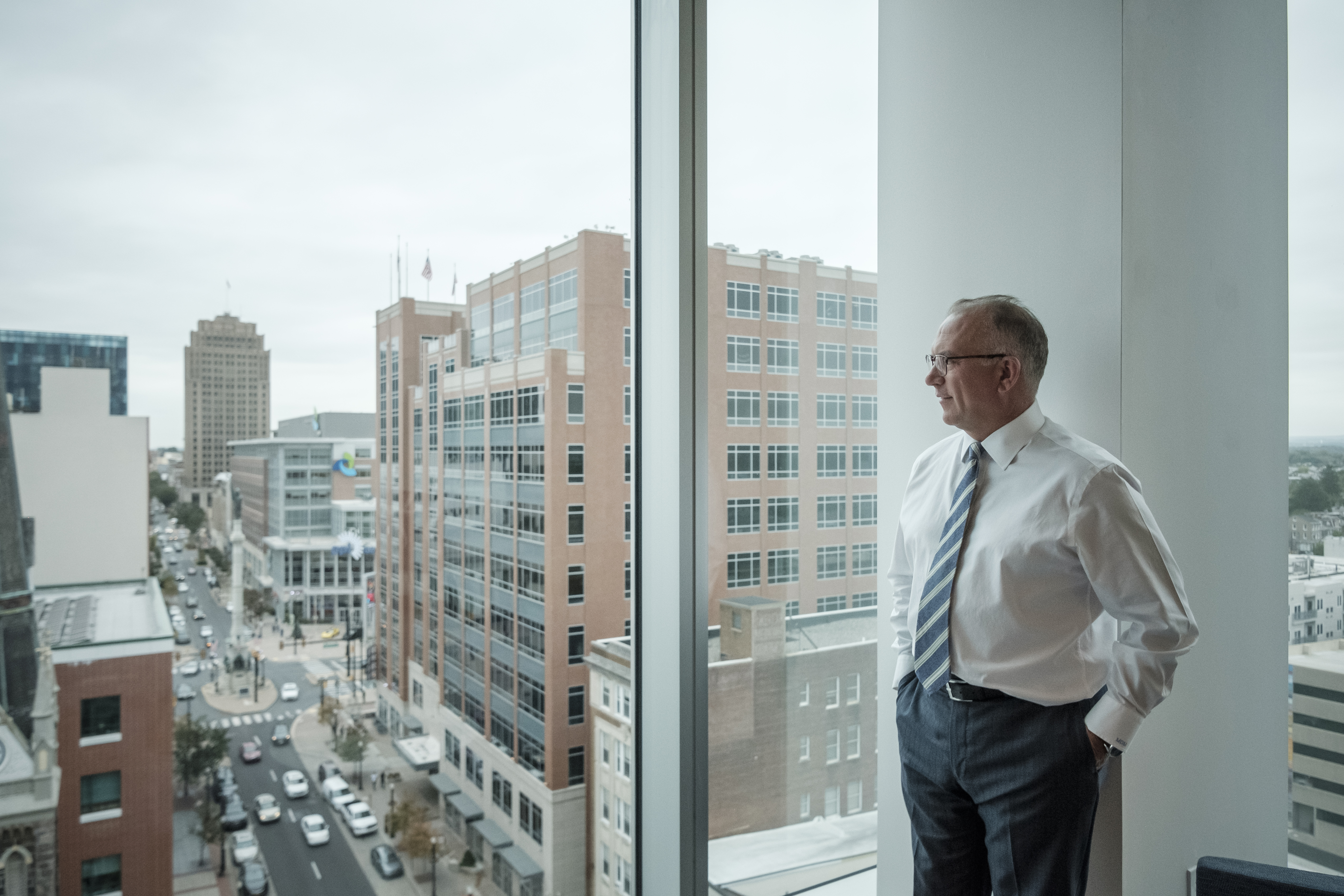 Today, Molewski is a principal and leads CAPTRUST’s Strategic Advisor Group, which has more than $340 billion in assets nationwide. His office sits atop the ninth floor of the gleaming new Tower 6 luxury office building overlooking Center Square and the PPL Center in downtown Allentown, perhaps symbolic of his rise to the top of his profession.

He and Diane live in a beautiful, sprawling home near Saucon Valley Country Club that reflects their love of the mythic American West. By any account, he is living the American dream, having achieved a measure of success only few could imagine. 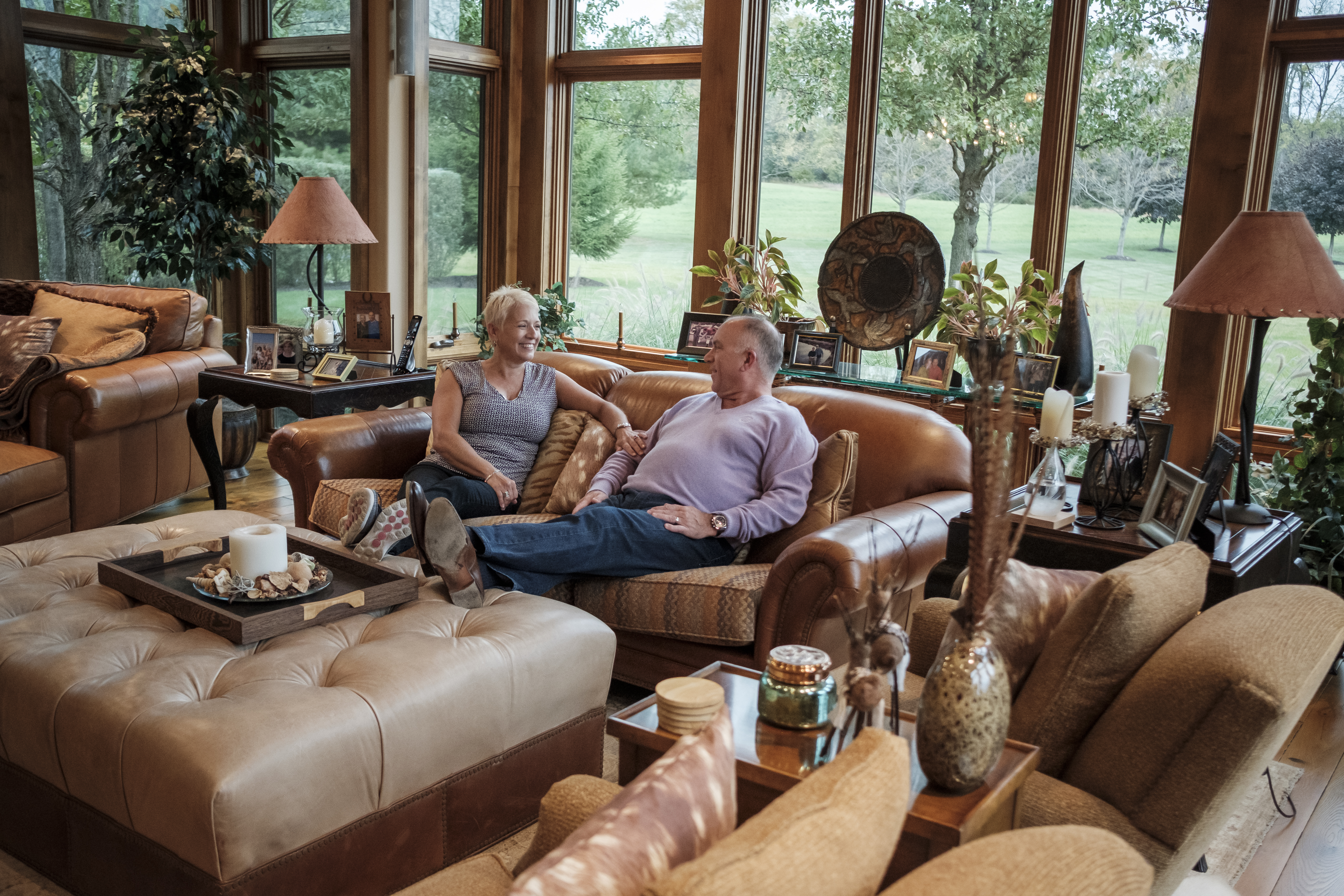 But Molewski has never forgotten where he came from, or the transformative power of education. In fact, his experiences growing up drove him to extend opportunities to others and give back to his community through leadership roles on the boards of the Northampton Community College Foundation and King’s College.

He’s also served for many years as co-chair of the Greater Lehigh Valley United Way’s Alexis de Tocqueville Society, which has grown from 80 members to 240 over the past decade and now raises about $8 million annually.

In addition to serving as chair of the NCC Foundation Board, Molewski has been co-chair of the annual Lehigh Valley Food and Wine Festival since he came up with the idea 10 years ago. To date, the event has raised more than $2.5 million for NCC scholarships.

“We realize how impactful education is, especially for people who are younger or in a transition period in their life,” Molewski says of the philosophy that serves as the basis for the philanthropic work he and Diane perform.

“Many people have to make some tough decisions and near-term obstacles can deter them from accomplishing long-term goals. And other times it’s the opposite, where the obstacle becomes the opportunity to revisit and reprioritize one’s education and opportunities.

“The common thread is that many of these situations involve big financial challenges that make even having that conversation with yourself very difficult. And making the decision to further your education seemingly impossible,” he adds.

“That’s where these outside resources come in, these incremental dollars that are raised by community leaders and other folks who are aware of these situations and willing to support others at a crucial time. We hope to fill a gap and to make a big impact on these people who need help right now.” 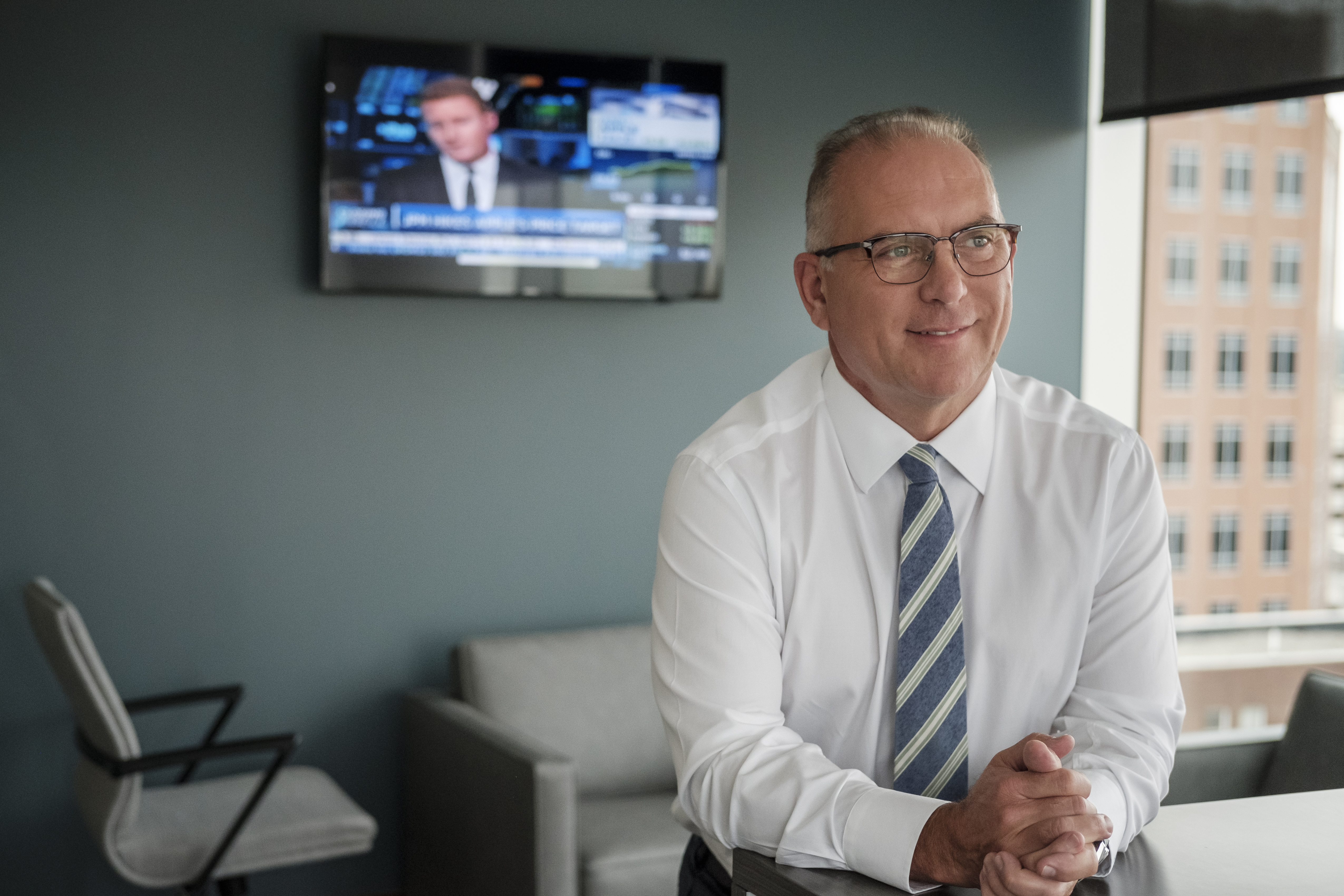 ‘A SENSE I WAS HELPING PEOPLE’

Cutting and delivering firewood. Pulling weeds in a blueberry farm. Pumping gas. Working as a water ski instructor (even though he had never water skied in his life before he was hired!). Selling vacuum cleaners door to door.

“My older brother Billy and I took it upon ourselves to get all these odd jobs, whatever we could do to make a living in a small town,” Molewski says. “My stepfather was a laborer in a sawmill. He worked really hard, but wasn’t able to produce a high standard of living.

“My mom had seven kids, so she was doing part-time work and trying to raise a family and make ends meet, but she encouraged me to get a good education.”

One of the jobs that was particularly odd for a 13-year-old was preparing tax returns for family members.

“It wasn’t that difficult,” he says. He simply read the instructions that came with the tax forms, gathered the necessary information from relatives, filled out the forms, got them signed and mailed them in.

“Then, word got out that I was doing free tax returns. We had a large family, so I started doing a lot of tax returns. Many family members had their own businesses and business complexities got involved. I would figure it out.

“Now, you can do it online. Back then, you’d send away for instructions and the proper forms. The instructions came in the mail and you’d read it carefully, fill out the form and send it in.

“It all went very well until H&R Block put up a shop in our small town and they found out that some kid up on Cemetery Road was doing tax returns for free. They charged $12 or something. They weren’t too happy with me. But it was very good financial experience.” 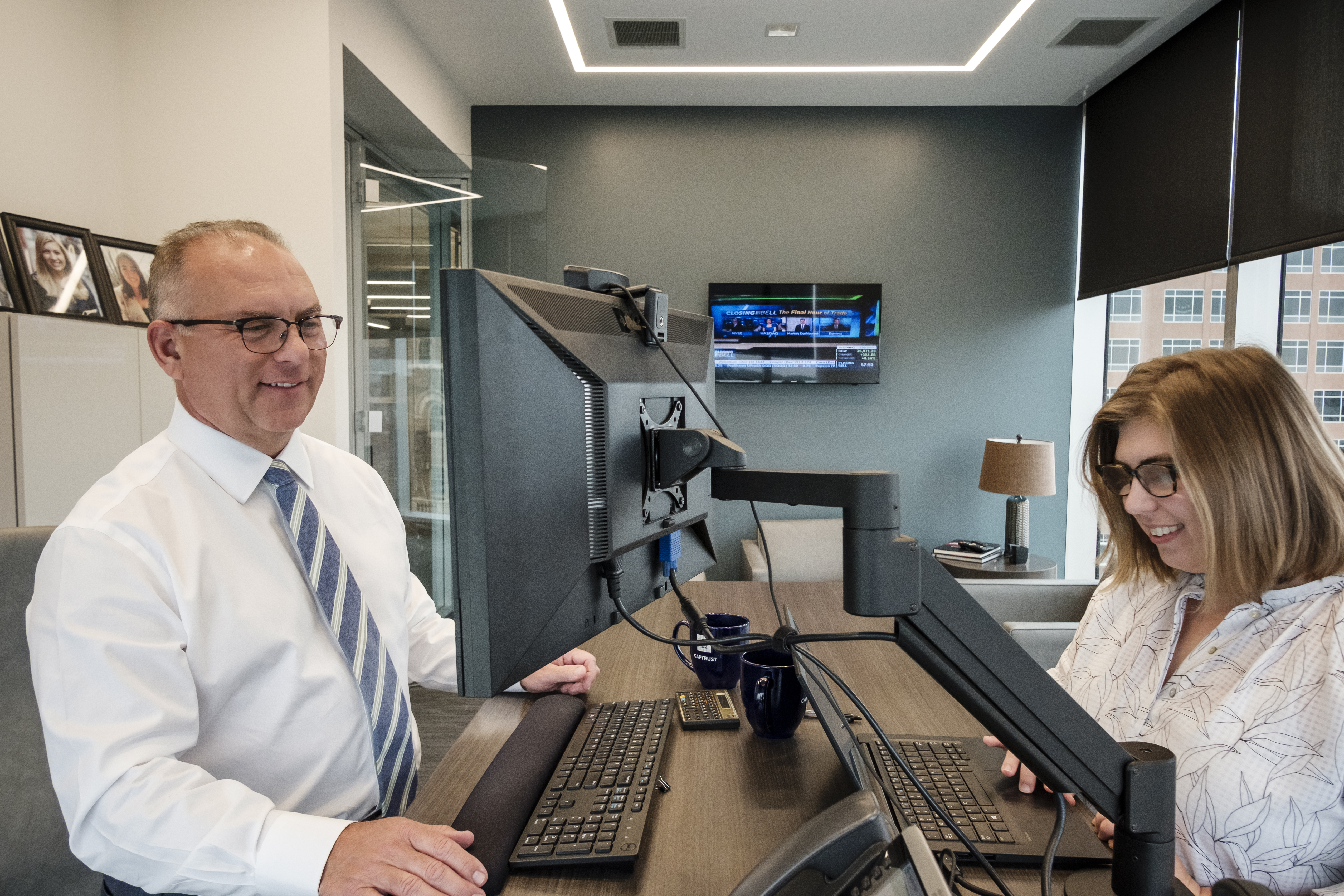 Molewski clearly had an aptitude for numbers and finance from a surprisingly young age. He majored in economics at King’s College while also earning a degree in psychology. “I really have that interest in working with people and helping people. That was the reason for psychology. But it was the economics part that I really put more weight on.”

Although he has worked hard all his life and achieved success far beyond what a small-town boy from a big family with modest means ever could have imagined, Molewski says he is still motivated by the same desire to help people that led him to do those family tax returns.

“I’ve done financial advisory work for high-net-worth clients as well as institutions since I graduated from college,” he says. “I’ve done it at different levels, as your career progresses and you have more experience and expertise and resources as time goes along.

“But I’ve always done financial advisory work. What I see is an opportunity to help other people accomplish their goals, their objectives, and to not only watch them progress, but be a part of that—to help people not get off track and maintain a steady course.

“It’s very rewarding. And at the same time, without good counsel, things could go badly for these clients. I’ve always had that sense that I was helping people. And when you do that, it’s not really like working. It’s more like coaching or mentoring in some way, where you have the opportunity to help people get to where they really want to go.”