Jayson Diaz brings food, water and goods to those in need 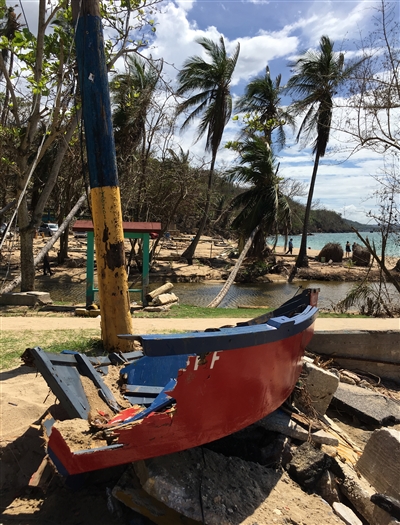 When tragedy struck, Jayson Diaz, biology major and Freshman at NCC, wanted to do something for an island of people that he's had a deep connection with since his youth.

Jayson's mother, who works for JetBlue, went down to Puerto Rico to help with the Hurricane Maria relief efforts. JetBlue airlines did an independent relief effort, and when his mother asked if he'd like to come down to help, he jumped at the opportunity. JetBlue flew him to the island and back as a part of this program.

As a second generation Puerto Rican, Jayson would go to Puerto Rico four or five times a year to visit family. "I've been to Puerto Rico many times, it was a beautiful island, and now, it looks like it's destroyed. The trees actually look like they're singed off at the top from the winds."

He spent four days on the island working with FEMA, the American Red Cross and volunteers from the island delivering water and food to the Westside mostly. In its current state, it's hard to transport goods across the island; so, Jayson and other volunteers cleared debris off of the road to help with that.

There's no cell phone service right now, and the people on the island use satellite phones in case they need to contact someone. Once he came back, Jayson would hear from his mother, still on the island, every so often just to check-in and let him know she was okay.

"I was there to enjoy the beaches each year and enjoy all that Puerto Rico had to offer. It was only right that if I had the opportunity to give back, I take advantage of it. Even if it was for four days, I wanted to help any way I could," he says.