Beyond the Walls of NCC 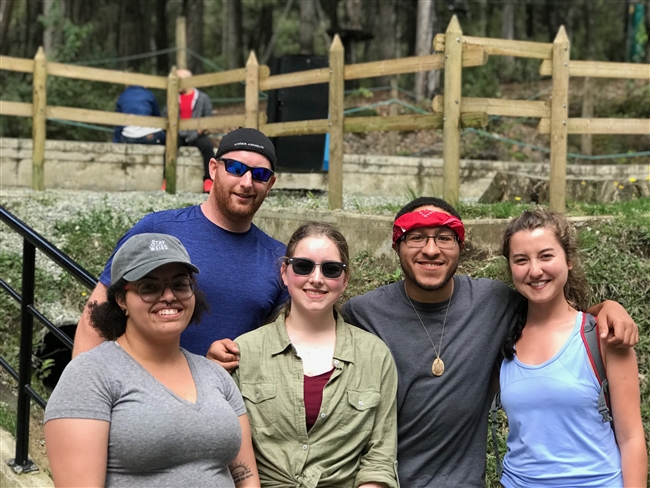 In 2018, two students took trips through Northampton Community College’s (NCC) study abroad program. The places they visited may have been different, but their experiences and what they learned impacted both students in a major way.

Conrad Richebacher, age 76, visited Egypt in spring of 2018, and he was hooked on the study abroad programs at NCC ever since.

Richebacher was an architect for many years, which he studied at Penn State University. Since the 1960s, he has taken classes in the Fine Arts Program at NCC, interested in making the world a more beautiful place. With this kind of background, a trip to Egypt was very special to him, particularly getting the chance to see magnificent structures like the pyramids and mosques. “When we got to the pyramids I actually started crying because I never thought I would get there,” said Richebacher.

Interested in ancient Egypt, he was excited to learn about the people who lived in this country. He gained respect and understanding for their religious beliefs, food, and cultural practices. After the trip, Richebacher produced a painting for Dean of Humanities and Social Sciences and chaperone on the trip, Christine Pense. The painting, inspired by the sights Richebacher experienced while in Egypt, is proudly displayed in her office.

As a part of Professor Kelly Allen’s sustainable food systems course students like global studies major, Annamarie Boyer, took a trip to Colombia to learn about how food systems work in schools, agriculture and business there. On this short one-week trip, they took trips to a sugar cane plantation, chocolate producer and strawberry farm learning first-hand how these Colombians processed and farmed foods.

Boyer said, “I go to a lot of farms with my family in the U.S. to get local produce and such; so, this felt like home to me. I saw how these systems work in other areas outside of my own country. The Colombian people served us coffee at one of the locations, and we watched the sunset. It was stunning.”

For Boyer, the adventures didn’t stop with just one trip outside of the United States. In the summer of 2018, she went to Oviedo, Spain, as a part of an intensive language course. While there, she took part in a conversational course to learn Spanish language and grammar five days a week for a month. The city has an abundance of old architecture, which fascinated and intrigued Boyer. “The Spanish blend modern and older architecture and art. The sculptures and the buildings are beautiful.”

Boyer and fellow NCC students got the chance to discover the surrounding areas around Oviedo. They took a trip to Covadonga, Spain, to admire the breathtaking landscape. They even had an opportunity to visit a beach town, León. Both sites, off the beaten path of major cities, provided a true cultural experience for Boyer with the opportunity to interact with locals on a personal level. “Immersion learning is the best route to go if you want to learn something fast and effectively. Every day we were going into shops and in the mall, and everywhere you go there are signs in the native language and people to talk to, so, we get to practice it.”

Richebacher is going to Paris for spring break this March. He plans to continue visiting different countries and learning more than he ever thought he would for as long as he can. Financial aid at NCC made it possible for him to take these trips.

These students, and others, are not done with their intercultural learning opportunities.

Richebacher states of his trip, “The one thing you always learn when you travel is that we are all the same loving people.  The chance to travel abroad with NCC is a great one. Spring break trips are for that week, but it ends up being a lifetime of memories.”