"All the magic of creation exists in a single tiny seed," Jennifer Keim quoted her favorite childhood movie FernGully. "That has stuck with me my entire life." 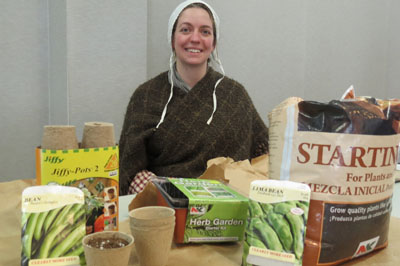 Keim works at Quiet Valley Living Historical Farm, a 19th century Pennsylvania German farm dedicated to the preservation and education of rural farm life. She came to the Monroe Campus, garbed in period dress, on March 19 to talk to students about historical farming and modern-day organic farming and gardening.

"Years ago, you were only able to eat what was in season," Keim explained. "The month of March was called the dying time, because so many people passed away at this time. If you could survive through March, chances were you could survive all year. Then canning was developed."

Canning made fruits and vegetables available all year long and as a result, people lived longer and the population boomed.  Yet more food needed to be grown. As large-scale farming developed, so did pesticides.

Birds ate the poisoned insects, causing some species like the eagle to almost go extinct.  The pesticides also killed off helpful microbes and fungi in the soil.

"Small-scale farming and gardening can benefit everyone," Keim said. "And it's not as hard as you think."

She then went on to describe techniques used at Quiet Valley, which strives to be historically accurate, and those she uses in her own home garden.

Pests can be a problem. Keim suggested planting basil with tomato. The herb repels certain insects. Cat nip can also deter pests while at the same time attracting cats. The scent of cats in a garden can help keep small rodents, like chipmunks, away. 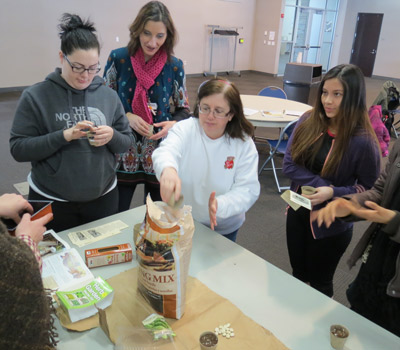 200 years ago, one garden pest, the deer, was rare in Pennsylvania. Today, the overabundance of the animal has made Quiet Valley consider changing its historically-accurate fence to a taller size.

"Mountain lions use to keep the deer population at a normal rate, but in the 1860s these predators were shoved out, creating a deer paradise," she shared.

Farmers and gardeners are also at the mercy of Mother Nature, Keim added, and she's not always kind.  But for the fledgling gardeners who were in attendance, Keim offered this advice:  "If you find something that works, stick with it. Then try something a little harder every year."

The presentation ended with the chance for those in attendance to plant their own lima bean and string bean seeds in portable containers to take home.