The community has been enjoying fresh and delicious produce from the Northampton Community College (NCC) East 40 Garden since early spring at weekly Garden Markets. The growing season is just about done, and the market is over. 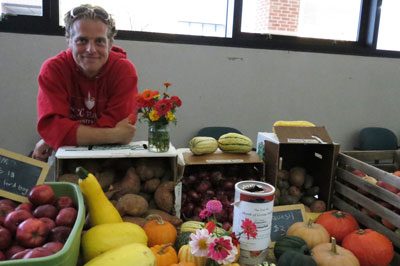 Don't put away those reusable shopping bags yet. There's good news! Local vendors will be supplying produce, breads, meats, cheeses, candles, coffee, clothing, desserts, canned foods and more through the fall and winter months at NCC's SlowMarket Place. The products will be chemical and GMO free. The market is open to the public and will be held in Laub Lounge, the second floor of College Center, on the Bethlehem Campus every Wednesday beginning October 28 from 10 a.m. - 2 p.m. A soft opening of the SlowMarket was held on October 14.

"The produce will be grown in green houses, hoop houses and cold frame houses, which gives farmers the ability to grow year round," Kelly Allen, English professor and one of the driving forces behind the creation of the community garden, said. "Your palette is supposed to switch for the seasons. The market will feature cold weather produce, in addition to meat and other vendors."

"The definition of unsustainable means something that will collapse. The 'I want it when I want it' mentality that supermarkets are based on is unsustainable. We shouldn't be eating tomatoes in January. A SlowMarket acknowledges you can't have it whenever you want it and helps you learn to try new things," Gary Warren, manager of the community garden, said.

"It's the opposite of fast food," Allen added. "It's the process of planting, growing and cooking, freezing and canning."

A Harvest Fest will be held in the Quad from 10 a.m. to 2 p.m. on Wednesday, October 21, at the Bethlehem Campus. It will include SlowMarket vendors as well as produce from the NCC East 40 Garden.