This Can Be Done! 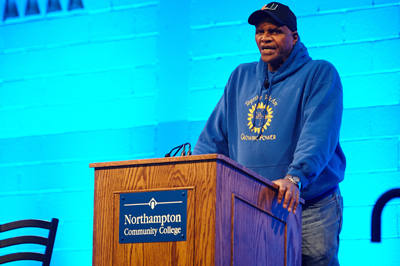 Gardens flourish on abandoned lots in Detroit, Youngstown and Milwaukee; in the midst of urban housing projects; near senior centers; at Boys and Girls Clubs; in greenhouses next to cemeteries.  Corn grows in the city of Chicago.  Soil, laid upon asphalt covered by wood chips, creates an environment for planting.  These innovations constitute a food revolution, spearheaded by Will Allen.

"This can be done!" said Allen, the internationally renowned urban farmer, founder and CEO of Growing Power at Northampton Community College, on April 23.  His presentation, which included a slide show, a video and a talk, was the keynote event of Northampton Community College's (NCC) Agriculture and the American Identity, the NCC National Endowment for the Humanities series for 2014-2015.

Allen's goal is to promote the belief that all people, regardless of their economic circumstances, should have access to fresh, safe, affordable, and nutritious foods at all times.  His ideas are transforming agriculture at a time when farmland is rapidly shrinking, world population is quickly expanding and 23 million people live in "food deserts."

Allen is the 2008 recipient of the John D. and Katherine T. MacArthur Foundation Genius Grant,   was a member of the Clinton Global Initiative and joined First Lady Michelle Obama in launching "Let's Move," her initiative to reverse America's childhood obesity epidemic.  In May 2010, he was named one Time magazine's "100 Most Influential People."  He is the author of The Good Food Revolution: Growing Healthy Food, People and Communities, published by Penguin/Gotham Books in 2012.

The son of a sharecropper, Allen learned the importance of growing good, healthful food from his father.  After an illustrious career as a professional basketball player, he returned to his family's farming roots, intent on applying the latest scientific, organic techniques to improve yields and produce better-quality food through intensive cultivation at small, local farms.  Noting that our grandparents wouldn't recognize what we now eat as food, he said that "we have to go back to being responsible for our food."  Growing Power operates 25 farms and 300 acres and produces 150 different crops. 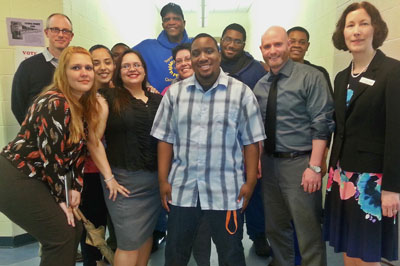 How does Growing Power do it?  "Renewable energy is a must," Allen said.  His energy sources include compost, solar panels, solar hot water systems, water catchment systems, and anaerobic digesters, which break down microorganisms into biodegradable material in the absence of oxygen.  Through hydroponics, Growing Power uses mineral nutrient solutions, in water, without soil-another sustainable method to maximize production.  Growing Power has taught these sustainable farming techniques all over the country and in Kenya, Uganda and the Ukraine.

Next on the organization's agenda is the construction of a 5-story vertical farm.

In addition to cultivating land, Growing Power is cultivating communities, hiring the formerly incarcerated and engaging youth and older people in urban and rural areas. "We are growing good food and jobs," he said.  The organization is multi-cultural and multi-generational.

At his presentation, Allen showed how food quality and quantity can be improved through recycling waste and using every square foot of arable land. "Every year, 20 million pounds of food go to waste," he said.  Moreover, food loses its nutritive quality when transported from distant locations.  Some of it is so bad, it is unsalable.

Allen takes this deteriorated fruit and vegetables, along with wood chips, used-up brewery grains, and other discarded organic materials and makes nutrient-rich compost--one million pounds out of it.

"I have 100 employees, but billions of others work for me," he said.  Who are the billions?  They are an important sources of nitrogen for compost-worms grown in cocoons.  "The worms are our livestock," Allen said.  The creatures go through a sanitation process through sifting. 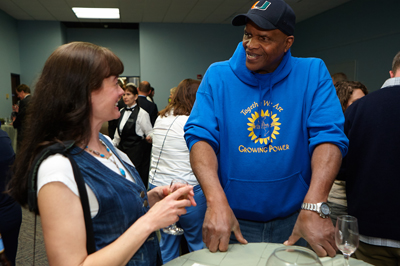 Growing Power also offers animal-based food, such as cheese from the organization's goats. The organization converted an abandoned laundry facility into a fish hatchery.  If you want to raise tilapia, however, you must first be able to distinguish male from female fish, Allen told his listeners with a chuckle.

Allen has optimism about the increasing demand for organic food, as exemplified by farmers' markets and local food used in restaurants and ordered by Sysco, the largest food wholesaler in the world.  He praised NCC and its president, Mark Erickson, for strong support of sustainability as demonstrated by the College's community farm.  Allen expressed faith in young people.  "You, the young people in this room, will solve the food problem," he said.

NCC student Tishwan Fulwood introduced Allen, and Jordan Knighton, also an NCC student, presented him with a gift after his talk.

NCC's year-long exploration of Agriculture and the American Identity has been made possible by an endowment for the humanities established through a grant from the National Endowment for the Humanities and generous donors.  Community Partners include the Bethlehem Area Public Library, Eastern Monroe Public Library, Bethlehem Area School District, Stroudsburg Area School District, Historic Bethlehem Museums & Sites, and Monroe County Historical Association.

View more photos from the evening in this photo gallery.