Whatever Floats Your Boat

Middle school students build and sail an 8-foot boat with some help from the FabLab! 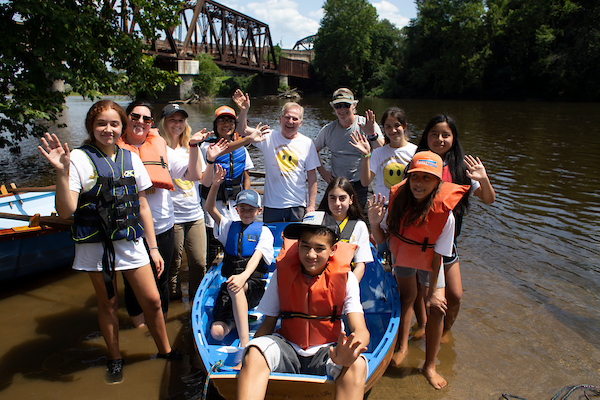 The saying goes, “Cry me a river, build me a bridge, and get over it.” What if you wanted to build a boat instead of a bridge? It will still get you across that river, and it’s definitely more fun to make, according to the Moravian Academy middle school students who built a boat at Northampton Community College’s (NCC) FabLab this summer. Once it was built, they even had the chance to set sail!

Lehigh Valley Summerbridge (LVS) is a free, non-profit enrichment program hosted by Moravian Academy. It’s offered to middle school students from across the Valley who want to get involved with summer projects that will assist in bridging their path from K-12 to college. With the help of Michael Brolly, instructor at the FabLab and at Moravian Academy, as a part of the program, students were given the opportunity to build a boat at the FabLab at NCC’s Fowler Family Southside Center in Bethlehem.

The students had six weeks to build a boat they call Humble Bee, an 8-foot boat. Students were at the FabLab working on it every weekday in the Luthier Lab and Wood Shop.

The boat came in a kit form, much like a model airplane, but on a larger scale. The boat was cut out using a Computer Numerically Controlled (CNC) machine. Students put all of the data into a computer, and, then the computer guided the cutting tools to do their bidding.

One of the students who built the boat was Hillary Inga, age 13, from Harrison Morton Middle School in Allentown. She said, “It was an amazing opportunity for my education, and I thought it sounded like something fun to do. It took a long time to look at the blueprints and understand them, but we figured it out. We got the chance to learn wood carving and use power tools, which are super cool skills to acquire.”

Brolly tried to expose the students to as many things in the Lab as possible to get them jazzed about learning.

“I have been wanting to start boat building in the FabLab for a while. So many deserving kids do not get a shot. I just want to help broaden their horizons and teach them new skills. The excitement comes from selling them the dream of setting sail in a boat they built.  Then, the use of the tools and smell of the wood take over.  It is magic,” Brolly said.

Brolly started with the students building the frame upon which the boat is formed. Then, the boat was built upon that frame, and once formed the students and Brolly took it off of the frame to outfit the rest of the boat with side rails (gunwales), seats, a rudder, and a mast. They used hand tools, such as drills and impact drivers, to get the job done. The boat was complete with oars and ready to roll on July 25, 2019 when it set its maiden voyage in the Lehigh River in Bethlehem. The boat did float, and it was a success!

Landon Parris, age 12, from Easton Area Middle School told everyone, “I was so excited when I first woke up this morning! I realized ‘it’s finally go time’ after spending many weeks on this! The other students and I felt really accomplished to see it out on the water.”

Watch the WFMZ coverage of the maiden voyage here.