Where Everybody Knows Your Name

Sharing favorite cookie recipes across front porches.  Planting rosebushes side by side with a friendly neighbor--even sharing gardening tools.  These 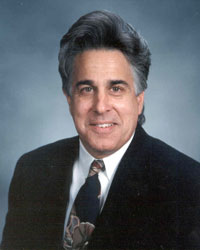 cozy images may seem to portray the fabled small town of yesteryear, a "Mayberry."  Yet these nurturing environments have become new again, thanks to the emergence of pocket neighborhoods, places designed specifically for social connection.

For his sabbatical project in 2014, Professor of Architecture Ken Trionfo explored pocket neighborhoods and has written The Neighborhood as a Social Place: A Design Guide for Pocket Neighborhoods & Cottage Housing as well as an appendix, a workbook for drafting cottage housing ordinances for municipalities. Trionfo visited neighborhoods in California, the northeast, and Florida, including the Marina Historic District in Delray Beach, and a senior housing development in Key West.

Pocket neighborhoods are cohesive groups of four to twelve cottage houses grouped around a village green.  A common house for social gatherings stands amid the homes.  A toolshed and a community garden may complete the circle. Unscreened porches face the "commons," as do kitchens and family rooms.  While the houses' rears are oriented toward the common space, the front facades connect to the sidewalk, contributing to the streetscape.  Residents park their cars off to the side or at the end of each grouping.  An entire pocket neighborhood may occupy lots as small as ¼ or a ½ an acre, and two or more of these may lie within proximity to each other.  Urban, suburban or rural-pocket neighborhoods can exist in any of these milieus.

Like pocket neighborhoods themselves, cottage houses create a small 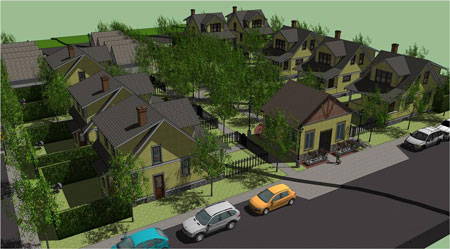 footprint, occupying 900 to 1,500 square feet.  Each has its own private side yard.  The houses are nested; the open side of one house faces the closed side of its neighbor.  The side that opens to its side yard has large windows and doors; the closed side has windows placed at higher elevations.  Linked to its natural surroundings through windows and porches, the cottages are compact and cozy.  Each one has its own personality.  A variation on the cottage house is the cottage tent, such as the temporary summer homes in Ocean Grove, New Jersey. Cottage houses range in price, from relatively inexpensive to very costly.

In all, the function of pocket neighborhoods is to facilitate bonds among people, whether they be newlyweds, singles, empty nesters, retiring boomers, downsizers, or just those who desire a sense of intimate community.  "It is the Cheers factor," Trionfo says.  "Everybody knows your name." He points to the advantages such a neighborhood offers-watchful eyes on residents' children, shared community projects, and neighborly assistance when needed.  The presence of a small, intimate community building ties people together by providing an ample space for birthday parties, events and celebrations among residents. 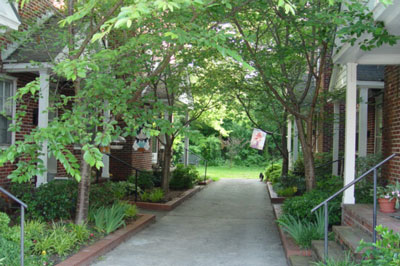 and an edge, with a public square marking the middle. This pattern retained popularity from ancient times to the automobile age.  Trionfo has traveled to the ancient Italian cities of Tropea and Taormino and to Quebec, Canada.  All of these places offer examples of this communal setup.

With the rise of railroads in the mid-1800s and streetcars later in the century, planners started to design "garden suburbs" around train stations and streetcar stops.  Architects at this time aimed to combine the virtues of city and country living.  This "garden city movement" flourished in Britain and the United States until privately owned vehicles began to dominate the roads in the 1920s.  Constructed in 1928 on the garden city plan, the neighborhood of Radburn in Fair Lawn, New Jersey, paved the way for the rise of motor vehicles by being the first community to separate the pedestrian from the automobile via pedestrian pathways.

According to Trionfo, Ross Chapin is the founding father of the pocket neighborhood.  About 10-12 years ago, he designed and built the first pocket cottages in the Seattle, Washington, area.  Many of these cottages still exist in Washington State, and the entire concept has spread to other places.

Trionfo comments that pocket neighborhoods are not for everyone.  Some people prefer seclusion.  But he believes that many long for this kind of living arrangement.

"Pocket neighborhoods will catch on," Trionfo says.  "People are aching for social intimacy."

Trionfo concludes that "the best neighborhoods just make us feel good.  Sharing our lives with others, our neighbors, gives us a sense of belonging.  If you are already living in a tight-knit neighborhood, 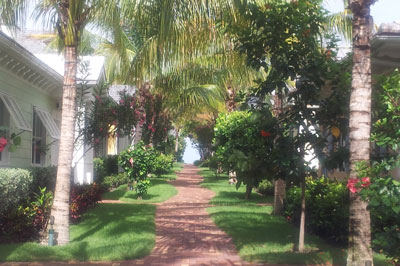 Trinofo is the recipient of many awards, including the NCC Educators' Award in 2003.  Under his guidance, the NCC architecture program has had and is continuing to have a visible impact.  His students' proposals were implemented in the College's beautification project, which redefined the center of campus and the quadrangle.  His design students spend much time out in the field; among their projects have been explorations of possible uses of a large tract of land in Nazareth, Pennsylvania, downtown building restoration for Bethlehem, Pennsylvania, and plans for restoring a neighborhood in southside Bethlehem and for improving residential and commercial buildings in Easton.  He established the Neighborhood Design Center at NCC, which includes the Neighborhood Design Studio, where students are given the opportunity to experience real-world learning while engaging with local communities.