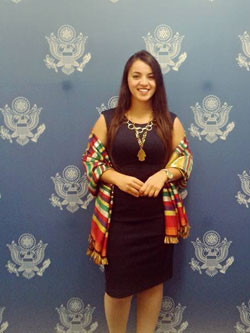 Using one's network is one of the best skills that any college student or young professional can learn to do. Often times it is the people that you know the most who are able to share helpful information with you and provide insight into new opportunities. Although people usually think of networking as something that is only done with professional peers, learning to network through your close friends is a great way to practice. This is exactly what Khawla Neji did; and that is how she took her first steps toward her year at Northampton Community College.

Following the completion of her preparatory education, Khawla evaluated her grades and made a decision about what career she wanted to pursue. "Initially, I wanted to work as an anesthesiologist. Unfortunately, I did not have the scores that were required of me to get into college for that career. When I considered what other things I liked, I chose to study accounting." Unlike some of the other students interviewed for this project, Khawla shared that in Tunisia, if a student does not like the program they chose, they can change their major; although after the first year, student are expected t to stay in their program. Prior to applying to the program, Khawla has been taking introductory accounting courses at the High Institute of Technology.

Khawla's networking practice came in the form of asking some of her friends who had completed the program prior to her what their experiences were like, "They told me that they enjoyed their year of study in the United States," she continued, "I know that this experience would make my resume stronger, so I decided to apply." Around 200 students applied to the scholarship program she did (a program run through Thomas Jefferson University). After completing the application and a test to measure her ability with the English language, Khawla completed an interview with a panel of American interviewers who asked her various behavioral and skill based questions. She completed the process in the late spring of 2016, was accepted into the program, and came to NCC this past July.

When asked if the U.S. was the same or different than what she expected, it was clear that some things were as expected, and others were not. "My host advisor had everything set up for me when I got here, so that was not very challenging. If I could tell myself something prior to coming here, it would be to prepare more for the large amount of work. In Tunisia, we are only tested two to three times a year. Here the work is constant. I get tired of it, but in the end I know that is going to help me when I go to work after school." Although the academics are of a different structure, the expectation that students will complete internships while going to classes is the exact same. "At my school, every major has internships required each year. Even though it is hard, it will help me to be more successful in finding a job." In the past, Khawla has completed internships at chemical companies and at a post office near her school during which she was involved in maintaining accurate accounting records for the entire facility, "Everything from payroll to product sales." Similarly, Khawla is expected to complete an experiential learning component and is working with the Career Services office in order to locate her internship that she will complete as part of her year of study in the United States.

When she does get the internship, she is expecting it to be similar to the work that she has done in Tunisia, but with one large difference, "In Tunisia, tax on purchases is included in with the price that is rounded to a whole number. In the United States, the tax is added on, and there are much smaller numbers that go into the accounting process. This difference might make it more challenging."

Looking forward, it is clear that Khawla's networking with her friends about their experience coming to the U.S. for school led to her application, acceptance, and eventual completion of her academic program. When the year is over, Khawla is planning to complete her education and final internship with the Tunisian Chemical Company; the company that she hopes to get a job for, working as an Expert Accountant. "It is a large company, so there is a lot of opportunities to move up," she says, "I love accounting, and I know that coming to Northampton is going to help me get the job I want."