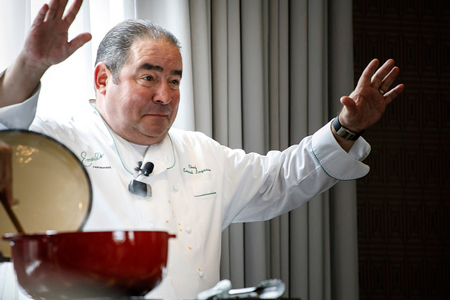 The 2018 Lehigh Valley Food & Wine Festival kicked off Friday afternoon at Sands Bethlehem with a cooking demonstration by celebrity chef Emeril Lagasse. During his 40-minute demonstration, where he prepared a Hawaiian-style tuna fish Poke that melted in the mouth and a chicken andouille gumbo that tap-danced on the taste buds, he shared many tips and tidbits gathered over his decades-long career.

"Don't rush the roux," he cautioned the audience. "Roux needs your focus and attention. Don't do homework with the kids. Don't feed the dog. It takes about two beers to make a perfect roux. You stir. Have a beer. Stir. Have more beer. Stir again. On a bad day, I've ruined the roux just so I could have a couple extra beers, and then I had to start over. Keep cooking it over medium high heat until it's the right color-a chocolate brown that makes the perfect foundation for gumbo."

He shared other secrets to making the perfect New Orleans-style food. "In New Orleans, we don't make the typical mirepoix, which is a combination of carrot, celery, and onion that's the base of many soups. Instead, we have what some call the 'holy trinity' that's onion, celery, and bell pepper."

A good gumbo, says Lagasse, takes about two hours or more to cook. As it cooked and filled the room with wonderful scents, he taught a lesson on the importance of lids on cookware. "When you buy a 10-piece cookware set, and it comes with seven pots and three lids, do you feel ripped off? Why three lids?" he asked. "Because the lid is a critical cooking tool. If you put the lid on, you stop evaporation and braise the meat, which cooks and tenderizes it. You remove the lid-you get concentration and evaporation. So, three lids are important."

The final dish the audience sampled was his Hawaiian-style poke to which Lagasse was introduced more than 20 years ago by his friend Sam Choi, who has held a Poke contest each year for nearly three decades. The secret, Lagasse confided, is the peanut butter and making sure to use fresh fish.

After everyone enjoyed a taste, Victor Bock, Executive Chef at the Sands, announced the winners of a Northampton Community College (NCC) mystery basket culinary competition. Initially, the eight students were told that three would win an all-expenses-paid scholarship to attend an externship in one of Lagasse's New Orleans restaurants in 2019 over winter break. 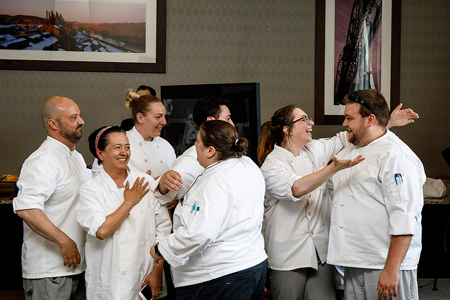 The afternoon cooking demonstration provided the perfect launch to the 2018 Lehigh Valley Food and Wine Festival's Grand Tastings, held in the Sands Event Center on Saturday, June 2 and Sunday, June 3, from 1 - 4 p.m.

New to this year's festival was the Pork Tasting Adventure by Clemens Food Group, which featured a combination of samples including thick-cut apple wood bacon, dry-rub pork tenderloin, shoulder bacon, and a cheddar ale bratwurst paired with regional craft beers.

Pork experts educated guests about different pig cuts and led demonstrations on how to safely (and tastefully) prepare, cook, and serve a variety of pork products. 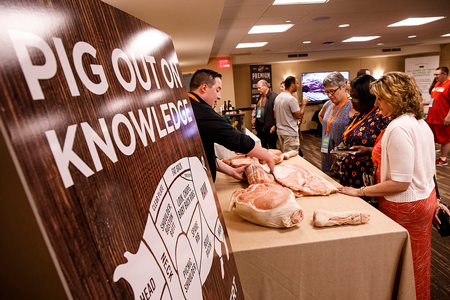 Bock and Scarpone paired a poutine and braised lamb shoulder ragout with a Mississippi punch made of lemons, black tea, bourbon, rum, and cognac. Their final pairing of the afternoon included a dish of steak and foie gras empanadas and glass of Caymous Red Schooner Malbec.

Visitors could sample over 50 different wines, from Muscat and Riesling to Chardonnay and Sauvignon Blanc to Pino Grigio and Noir, Merlot, and more. VIP guests enjoyed the champagne and spirits tasting room where Southern Glazer's Wine and Spirits of Pennsylvania staff offered all kinds of information about the fine champagne and spirits.

A very special thank you to the  festival sponsors, without whom this event would not be possible.