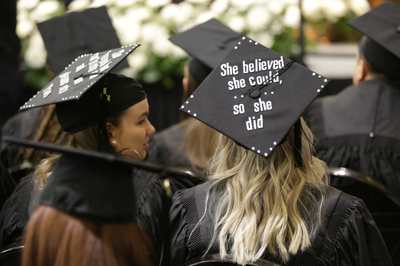 Proud, joyous Northampton Community College graduates and their family and friends celebrated Winter Commencement on January 28 at the Spartan Center.

The ceremony recognized 630 students who completed associate degrees, diplomas and certificates in August as well as in December. The graduates ranged in age from 19 to 66 and included thirteen who had achieved a 4.0 GPA.

Dr. Mark Erickson, NCC president, told the inspiring stories of several graduates, highlighting their triumph over challenges in order to achieve their goals.  He especially applauded the nursing students, who started the Hope Food Pantry.  "In the true spirit of our Northampton community they have effectively demonstrated that life is best lived in the service of others."  He said that he had no doubt that every graduate will have a positive impact on their community, country and world. 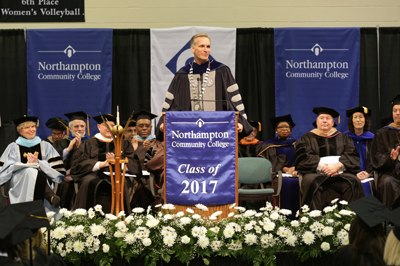 earn a master's of arts degree from Wake Forest University and a Ph.D. from Loyola University in Chicago, Dr. Grigsby was named president of Moravian in 2013.  A scholar in medieval literature, early modern literature and the history of medicine, Dr. Grigsby is a strong advocate for liberal arts education and a member of the Chronicle of Higher Education Book Club, and the Council for Independent Colleges.

Drawing on his background in medieval studies, Grigsby characterized commencement as the beginning of a never-ending quest, comparing it to the striving of medieval literary characters for a prized object.  In contrast to these journeys of the past, however, he said that, "the true quest is what one learns about oneself and one's self-actualization, which is important to the individual and then to society.  Ask yourselves what will your mark on society be."

Both Erickson and Grigsby lauded the graduates' families for the many ways they supported their students' quests.

The event concluded with hearty cheers, happiness about what Associate Professor of Math Kurt A. Withey, the faculty speaker, called a "most super awesomest day."

View Commencement photos in this gallery and the tweets, posts, and messages shared on our social media wall during the commencement ceremony here. 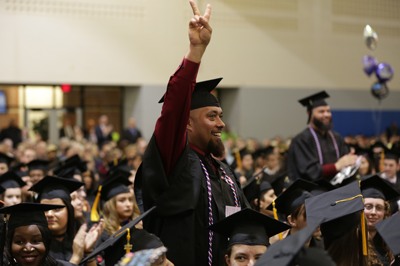