A Life of Irony

Javier Ávila's "The Trouble with My Name" 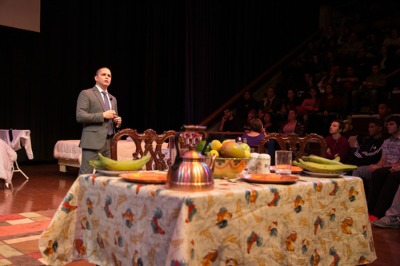 "Life has a way of presenting irony to you," said Northampton Community College (NCC) English professor Javier Ávila. The poet, novelist and essayist, lovingly called "The man, the myth, the legend" by his "Avilites," his students, explored the complexities of his own life and that of other Hispanics in the continental United States.

The audience spilled onto NCC's Lipkin Theatre's aisles for the October 27 premiere of Ávila's one-man traveling show, "The Trouble with My Name." Students and teachers from several other schools, in addition to NCC, came out for the standing-room only performance.

On a set furnished with two beds, framed photographs, a table-and-chairs, and lamps, Ávila told his story with verse and anecdotes, seriousness and humor. Slides of his family at least eight decades back "put faces" on his younger self and his grandparents and parents.

Born and raised in Puerto Rico, Ávila arrived in Pennsylvania at the age of twenty-three. During his life, some "bubbles" burst, bringing him multiple ironies. Bubble 1: In Puerto Rico, he was considered and thought of himself as white. In Pennsylvania, "people let me know I was not white."

Bubble 2: Sleeping arrangements in his childhood home differed from those of his friends' parents. His father's nightmares troubled his own and his mother's sleep, necessitating separate beds. A soldier in the Korean War and a member of the Borinquineers, the only Hispanic-segregated regiment, Alfonso Ávila grieved his inability to save his friends' lives. Their deaths anguished him until the end of his own life, forty years later.

Bubble 3: Ávila thought that learning English in Puerto Rico would be a benefit. Thoroughly bilingual, he experienced ridicule in Puerto Rico for speaking English with an American accent. In Pennsylvania, he was mocked for speaking Spanish: a double-edged sword. In fact, the United States has no official language and has the second-largest population of Spanish-speakers in the world, he pointed out. "Some people are proud of being linguistically ignorant," he said. Sometimes he asks students a "trick" question: "What do Puerto Ricans have to do to become American citizens?" The right answer: "We've been American citizens since 1917!"

Other recounted moments of irony abounded. Ávila's poem "Denied Service" has a double meaning; it recalls a waitress calling him "foreign" as he entered a Hazelton restaurant speaking Spanish with a friend. The poet then ponders whether he should have told the waitress about his father's military service in Korea and his uncle's loss of limbs in Vietnam.

I can die for your country,

but I can't vote

In "Pride of Ownership," Ávila is planting flowers on his newly purchased property when a neighbor, assuming he was the household gardener, asks him to come across the street and do his yardwork.

The greatest paradox is Ávila's name itself. At a tennis club, an attendant informed Ávila that he was mispronouncing his own name. It's "Aveela," not Ávila, with the accent on the second syllable, she proclaimed. Given one of the most common first names in Puerto Rico, Javier once wished his parents had chosen a more exotic one. "I didn't know then that I had to move to Pennsylvania to have an exotic name, he said." The name Javier gets pronounced a variety of ways, rarely the correct one. He is grateful that once a day, he hears his name spoken as it's supposed to be: when he calls his mother in Puerto Rico.

Ávila's poems also deal with mortality. He pays "tribute" to Facebook by discussing the denial of death through constant, mundane postings. "I post therefore I am." Social media's predecessors, photo albums, mock our illusions of immortality. He writes:

You will also be the dead relative

of some young stranger who will ask:

Who was that, Grandpa?

Open-heart surgery and bearing witness to his grandfather's death impressed upon Ávila the urgency of life and the imperative of making the most of it. 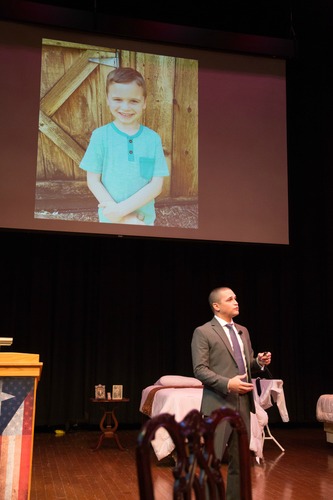 Some of Ávila poems are dedicated to his family. Ávila's 90-year-old grandmother, "Abuela" in Spanish, cooks "steamy white rice and red beans" in her tiny kitchen. He looks into his newborn son Oscar's eyes and sees those of his own father. A poem honors his mother, who rode four sweltering hours on a bus to attend college in another part of Puerto Rico. He learned from her that "teaching is a work of art. It must be a mirror that shows students the greatness within them."

A convergence of countries

has shaped your history.

At appearances, Ávila often talks about being a writer. Experience and suffering will change you and make you a better writer, he maintains. "You broke up with your girlfriend? Good! You'll write better."

Ávila's talk highlighted some very recent history, or rather, present discourse. He talked about the vaunted "good old days," when women couldn't vote or go to college or have a career; when people could be stoned or lynched with impunity by a mob because of their skin color; when interracial marriage was illegal in many states.

Speaking of history, Ávila has a distinguished one of his own. He was named Pennsylvania Professor of the Year 2015 by the Council for the Advancement and Support of Education and the Carnegie Foundation for the Advancement of Teaching. Recently he received the Hispanic Leader of the Year Award by the Hispanic Chamber of Commerce of the Lehigh Valley.

He joined the NCC faculty in 2006, impressed by seeing students of all colors congregating in the cafeteria. He teaches classes in English, creative writing, poetry writing, contemporary literature, and modern poetry.

In addition to teaching, Ávila has written books of poetry, essays and psychological thrillers, one of which, "Miente," was made into a movie. He has received numerous awards including the Outstanding Latino Cultural Arts, Literary Arts and Publications Award given by the American Association of Hispanics in Higher Education. The thoroughly bilingual writer, born and raised in Puerto Rico, published his dual-language anthology, Vapor: Selected Poems, (Poesía selecta/Selected Poems) in 2014.

The next performance of "The Trouble with My Name" will be at The Trust Performing Arts Center in Lancaster, PA, followed by performances at  Penn State Brandywine, Fitchburg State University in Massachusetts and the Bethlehem Area Public Library.

For more information on Javier Ávila, performances of "The Trouble with My Name" and samples of his poetry, visit www.javieravila.net.

You can view WFMZ's report on the performance at Northampton en Español.