A Meeting with a Former First Lady

A Meeting with a Former First Lady

"The trip was life-changing," says Northampton Community College (NCC) psychology major Shelby Toth about her two-week visit to Costa Rica as part of a peace studies and conflict resolution course.

Five NCC students of varied majors, led by Professor of Speech/Communication Donna Acerra, joined their counterparts from Cuyahoga Community College, in Ohio, and Southeastern Community College, in Iowa, to explore multiple tracks for building peace and the history of conflict resolution in Latin America.  Living with host families in San José provided a cultural framework for understanding the people and their values.

"Costa Rica was a key player in establishing stability in Latin America in the mid-twentieth century," Acerra says.  "José Figueres abolished the military after leading a revolution in 1948 and served three consecutive terms as president, laying the foundations for social reforms and establishing democracy." 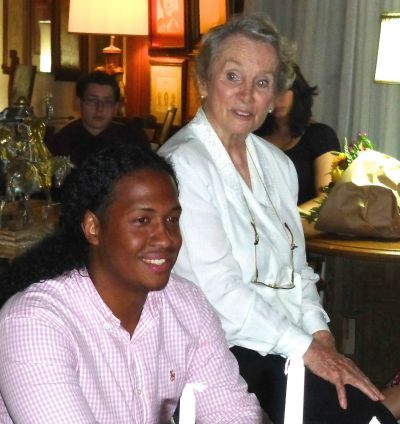 Most inspirational was the group's visit with former First Lady Karen Figueres in her home, where she served a dinner she had prepared herself.  American-born, Doña Karen, as she is lovingly known by Costa Ricans, moved to Costa Rica after her marriage in the 1950s.  She served as a member of Congress and as an ambassador.  Her son is a former president of Costa Rica, and her daughter is the current chair of the UN Commission on Climate Change.

"Karen is warm, curious and generous," Acerra says.  "She was interested in each student.  The students had been there for eleven days when they met her and were familiar with the country's history and the ongoing work being done to resolve social, political and economic challenges.  Karen brought this history to life.

"She empowered the students as leaders already (not just as students studying peace) as a result of taking the course.  They were acquiring tools to go home and be leaders in their school, community and the world.  She taught them that as leaders they need to think, love and serve."

The two-week stay included teaching schoolchildren some English and playing sports with them, visiting a prison and talking to the warden, hearing speakers, and touring a volcano and national monuments.

Shelby Toth calls the visit with Ms. Figueres "amazing."  "I will remember the advice she gave us for the rest of my life," Toth says.  "She told us to make sure we are leaders, that if we have ideas, no to be afraid to set a standard."

She hopes that other students will have the opportunity to visit Costa Rica through this program.  "Because of this visit," she says, "I am taking initiatives for life changes."

Trip participant Jake Massey says, "I have learned so much about Costa Rica's history and how the country's been working to move towards a truly sustainable and peaceful nation.  I also learned about all that goes into building peace and how it takes everyone to make it happen.  The trip has inspired him to double-major in international relations and language studies.  Like Shelby Toth, Massey had never been outside the United States before.

"Costa Rica is a country using positive peace building strategies to tackle the social injustices all nations struggle with, although it still has some challenges," Acerra says.

The other NCC students on the trip included Sierra Green, Ruben Garcia and Karina Routchka.