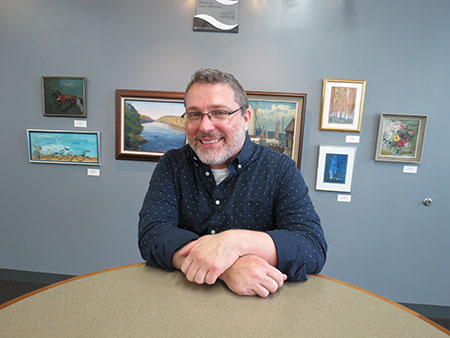 “Writers tap into something bigger than themselves,” said poet, librarian, naturalist, and gay- parent activist David J. Bauman at a reading and talk at Northampton Community College’s Monroe Campus on October 17.  A windy, colorful fall day at the woodsy campus made a fitting setting for the naturalist poet’s visit.

Bauman’s first chapbook, Moons, Roads, and Rivers, was released in December 2017 by Finishing Line Press.  His second, Angels & Adultery, was published by Seven Kitchens Press in May 2018 and selected by Nickole Brown for the Robin Becker Chapbook Series.  He read selections from these books as well as reciting, from memory, verse by poets who have inspired him: Robert Frost, Theodore Roetke and William Stafford. The event was part of the campus’s Art and Lecture series.

How does Bauman find poetry in nature?  A Pennsylvania native, resident of the state’s woodlands and a keen student of birds, he looks to nature as the wellspring for universal ideas.  “There is a connection between poetry and nature,” he said.  “Being in nature is a Zen moment, of observing, cataloging, and seeing where that leads, not knowing how it will end.”  He discovers meanings through the act of writing itself.

Often, he takes a notebook to the woods, watching birds and making notes on them.  He believes that memory frequently gets distorted, and that writing in the immediacy of the moment captures an experience more vividly.  Concise, with carefully chosen and commonly-understood words and short stanzas, his verse is painterly, creating pictures for the listener or reader.

Although currently natural settings are his greatest inspiration, “you can write about anything,” Bauman told his audience.  The scribbled word “bubblegum” on a rock wall alongside Route 22 inspired his poem “Bubblegum.”  A knock on a door catalyzed “Open.” A flock of birds suggested “Pigeon Hawk,” about a pigeon who thinks he’s a hawk and is accepted as such by hawks.  In “Through the Dark,” written with his son Micah, a white deer stands in the road, calm and seemingly unworried.  A blue shirt on an Amish boy begins a chain of reflection, culminating in “Amish Fantasy.”

Bauman shared many valuable tips for poets.  Be specific, he told them.  Write about an oak tree rather than a generic tree to give readers a precise visual image.  An image begins Bauman’s process and he follows its thread.  Sometimes he puts a poem away and reads and revises it a few days or a year later.  Revision, he says, is “carving” and “crafting,” polishing sounds and patterns, selecting words for exactness.   He doesn’t hesitate to discard poems he feels don’t work.  “You have to be willing to write a lot and let a lot go,” he said.  Like most poets, Bauman has great sensitivity to language.  The word “impact” used as a verb and “prompt” used as a noun jar him.

“There is a spirituality to writing poems,” Bauman said, referring to people of all religions and atheists such as himself.  There is also healing after trauma.  He feels gratified when a reader tells him that one of his poems made them feel less alone in their struggles.

He was awarded the University Prize from the Academy of American Poets for his poem “Overvision” (Moons, Roads, and Rivers) and is currently the editorial advisor for Word Fountain, the Literary Magazine of the Osterhout Free Library, where he previously served as editor-in-chief.  He is currently working on a full-length poetry collection with his youngest son, Micah.

An attentive audience, mostly students, asked many thoughtful questions.  After his reading at NCC, Bauman visited various classes at the college.