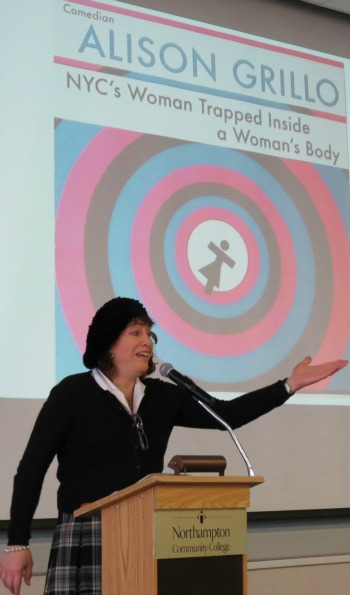 Alison Grillo, who calls herself "New York City's Woman Trapped Inside a Woman's Body," brought her presentation "An Awkward Pause," featuring comedy, personal stories and family photos, to Northampton Community College on October 20. The transgender comic plays colleges and universities across the U.S. and Canada, as well as New York City comedy clubs and the TV show "Last Comic Standing." The title of her show comes from her Time Out New York Joke of the Week: "Transgender people have become part of the national conversation. We're the awkward pause."

A former English professor with a B.A. in economics and political science from Drew University ("I double-majored in denial and repression"), an M.F.A. in creative writing from Emerson College and a Ph.D. in English from University of Wisconsin-Milwaukee, Grillo is at home with a college crowd. While much of her humor revolves around her experiences of transitioning from a man to a woman and living a transgender life, there is also a smattering of punctuation and political jokes in her repertoire.

For example, Grillo identifies as a lesbian, and jokes "If only I could meet a woman who knows how to use a semicolon!" She says she is "LTMF -- a Lesbian Transgender Mets Fan." She says her father had a hard time accepting her. "He loved the Yankees."

In her late 30s, Grillo was teaching at UW-M when she came out as transgender, after a painful break-up with a woman she says she still carries a torch for, all these years later. "I started wearing makeup, carrying a purse. I transitioned because I had nothing to lose."

She spent some time in San Francisco after deciding to live as a transsexual at age 40, and had sexual reassignment surgery eight years ago. "I want people to know that," Grillo jokes, "because it cost me $20,000 ... with a coupon!"

Waxing serious, she tells about growing up "happy, but knowing I was different. Transsexuality wasn't common, but it existed. But I was afraid. I thought I had a secret inside me, and no one knew the secret. You know who knew the secret? God. And my cat."

Grillo decided to reinvent herself as she approached her 50s, and moved to New York City to do stand-up comedy. She plays the college circuit, she says, because she wants to "spread the word that you don't have to be afraid of who you are." She appreciates the love and support she gets from college audiences.

"Sometimes in life you have to take a leap of faith," she advises. ""Someday, what you're doing today may not make sense. Today, I am happy trying to become happy. I am happy I followed my heart."

This event was sponsored by NCC Pride Student Club and the NCC Safe Space Committee.