An Evening of Poetry and Jazz at NCC Monroe

A double header for arts lovers

Have you ever read a poem about an esophagus?  Students at Northampton Community College (NCC) heard one on Tuesday evening, September 22,

when Marjorie Maddox opened the 2015-16 Arts and Lecture Series at NCC's Monroe Campus.

The award-winning poet who jokes that she is obsessed with Gray's Anatomy, has written a whole series of humorous poems about body parts, as well as poems about "A Trip to the Gynecologist," a "Wedding in Reptiland," and "How to Fit God into a Poem."  (Imagine God trick-or-treating!)

Much of her work is playful, but she also writes movingly about a student's death in a car accident, a colleague's son's death in a fall, and being haunted by the image of a stranger's heart being buried in her father's body after an unsuccessful heart transplant.

An avid baseball fan related to Branch Rickey who helped to break the color barrier in major league baseball by recruiting Jackie Robinson for the Dodgers, Maddox lives in Williamsport, Pennsylvania, where the Little League World Series is played each summer.  One of the poems she read at Northampton was inspired by watching Mo'ne Davis become the first girl to pitch a shutout in Little League World Series history,

leaning into the pitch that blasts the phrase

into the All-Star compliment

that it can be,

smiles as wide as a long drive,

then delivers the dream

we braided girls of

still need in whatever

Students at NCC's Monroe Campus leaned into the poet's words.  "She is really good at details," said Michael Chiesa, an education major who had never been to a poetry reading before.

The evening was, in essence, a double header for arts lovers.  After the poetry reading, renowned jazz vocalists and instrumentalists, Nancy and Spencer 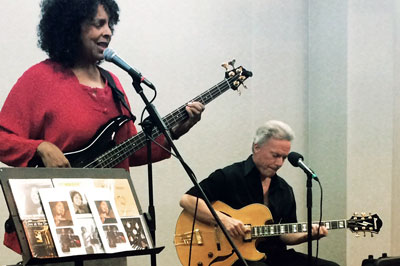 Reed, who have made their home in the Poconos for almost 40 years, treated the students to heartfelt interpretations of classics like "All Blues," by Miles Davis, "Love You Madly" by Duke Ellington, "Moanin'" by Art Blakey, and "Take Five" by Paul Desmond.

With their rich vocal blend, they had the world - and the audience -- on a string.

The Arts and Lecture Series has brought outstanding performers to Northampton's Monroe Campus for close to a decade.  The programs are open to the public as well as to students.  Tuesday's event was planned by John Bednar, Assistant Dean of the Monroe Campus, and Professor of English Julie Houston.  There will be another program in the spring.