An Evening with Temple Grandin

GO OUT AND DO IT! 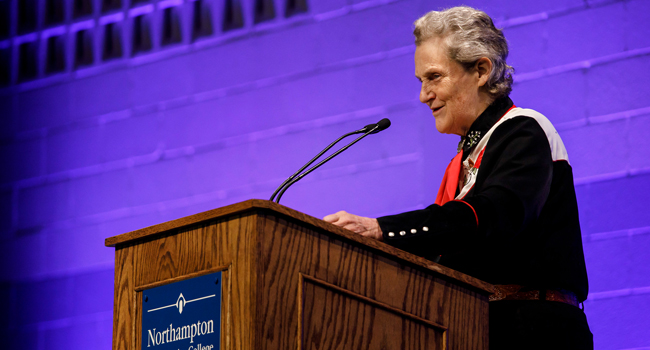 Diagnosed with autism at the age of two, Grandin earned a Ph.D. in animal science from the University of Illinois and is a professor at Colorado State University.  She is known worldwide for her research, books, animal advocacy, and the invention of the squeeze machine, which reduces anxiety in cattle.  The device is used in 50% of cattle farms in North America.

Veterinary technician major Jasmine Strause, who read Grandin’s first book at the age of fourteen, introduced the speaker: “No other person has had such brilliant and unique insights into animal behavior.  The amazing way she sees them enthralled my young mind.”

Grandin, who did not speak until age four, delivered her talk with robustness, humor and emphatic conviction.  She shared her observations about autism giving her a window into animals’ minds and what we can learn from animals about autistic children and adults.

“I think in pictures,” Grandin has often said.  “I live in a sensory, not word-based world.”  She is an object visualizer, someone who has unusually specific perceptions and associations tied to particular and detailed sight, touch and smell memories.

“I learned all my concepts using specific examples, which I placed into categories.  It is a bottom-up kind of thinking.”  For example, when Grandin pictures church spires, she does not perceive an idea in the abstract.  Rather, she sorts the spires into categories: a spire on a small country church, one on a larger church, one topping a cathedral.   As child, Grandin believed that everyone thought the way she did.

People with autism are also exceptionally keen observers, Grandin said.  While watching the solar eclipse of 2017, Grandin noticed phenomena others did not.  Her acute observations serve her, and the animals she works with, well.  On a visit to a beef plant in Ireland she saw that cows, about to receive vaccines, would not enter a chute if a truck was visible through holes in a gate.  Her suggestion of simple duct tape over the holes had the cows moving seamlessly into the chute.

There are degrees of autism, Grandin said.  “A little bit out on the spectrum, you have Silicon Valley.”  She also identified Albert Einstein and Thomas Edison as probably autistic.  Einstein did not talk until he was four.  Edison was a high school dropout.  “What innovations would we have without autism?  We wouldn’t have the electric light,” she pointed out.

Veterinarians can benefit from Grandin’s discoveries.  “All mammals have core emotions, such as fear, anger, rage, panic, and seeking,” she said.  A history of abuse lights up fear centers in the brain.  If a horse has been mistreated by a man wearing a black hat, a glimpse of another black hat registers fright.

In addition, “dogs need people,” Grandin said.  Loneliness and boredom affect pets’ well-being.  Dogs who “misbehave” may actually be manifesting loneliness or boredom.  She recommended 45 minutes of play per day. 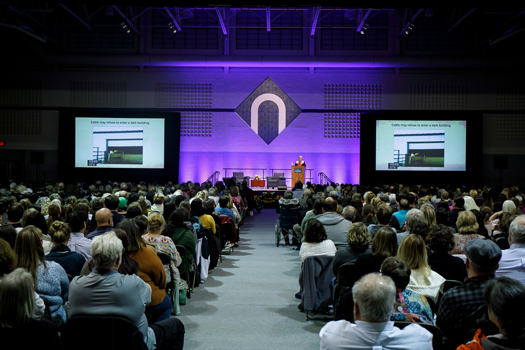 Grandin applies her understanding of animal behavior to teaching autistic children.   She advises teachers of autistic children to approach new subjects gradually, habituating their students at a comfortable pace.  Practices at school should be consistent with those at home, and surroundings should be tranquil.

She has strong opinions about education in general.  “Children [with and without autism] are being babied and not learning,” she said.  “Children are not being exposed to enough experiences. You have to get kids out and doing things.”

She also thinks that all children need to socialize more, spending less time at a computer and more time outside instead of indoors playing video games.  She values vocational education as a career conduit for people with and without autism.

For children with autism, being given a choice and having some control over a situation can help overcome fears.  “I was afraid to go to my aunt’s ranch,” she recalled.  “My mother gave me a choice:  spend the entire summer at my aunt’s ranch, or one week. Not going, was not an option.

In fact, her summer at her Aunt Ann’s ranch sparked her lifelong interest in animal behavior and welfare. Through her business, Grandin Livestock Systems, she ensures that meat-processing plants abide by humane treatment of animals.

To the surprise of the audience, Grandin said that being a woman in a male-dominated field, stock-raising, presented much more of a challenge than her autism.  Yet she found doors to pass through, with the support of her mother, her third grade teacher, and a high school teacher.

“Work hard to make yourself good at something that few people can do,” she advised.   Most of all, she said, “GET OUT THERE AND DO IT!”

NCC has four teacher education programs. Before her talk, NCC education majors, and their faculty, along with other faculty and administrators met with Grandin for small group conversations. View photos from Dr. Grandin's day at NCC in this photo gallery.

The event was part of Northampton Community College's eighth Annual Humanities theme year, Humanities Best Friend: Dogs and the Human Saga, which is made possible by a grant from the National Endowment for the Humanities and the generous support of donors.  NCC partners with the Bethlehem Area Public Library, the Eastern Monroe Public Library, Historic Bethlehem Museums and Sites, Bethlehem Area School District, and the Monroe County Historical Society.   Dr. Charles Rinehimer, professor of biological science and an instructor in the veterinary technician program, is this year’s chair of the series. He served as moderator for the Q & A portion of Dr. Grandin’s talk.