An Interview with John Hope Bryant 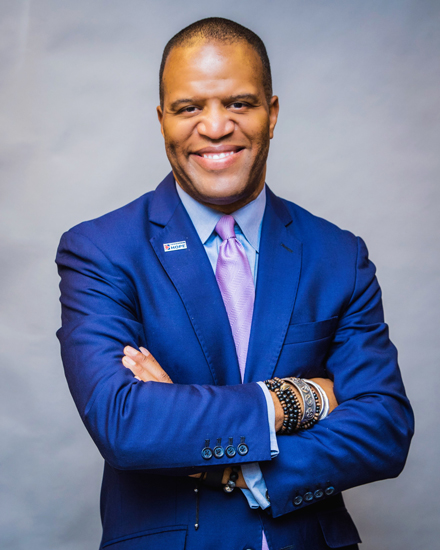 When financial literacy entrepreneur and businessman John Hope Bryant speaks to Northampton Community College students on Wednesday, Sept. 30, he plans to challenge them with these questions:

“Don’t you want the world to know you were here? Or is it just about living, getting a job, paying you bills, going on a date Friday night, sleeping in on Saturday or Sunday. Is that your deal? Or are you special?”

Don’t mistake those words as motivation, says the 54-year-old Bryant.

“I want to inspire them,” says the boy from Compton, Calif., who grew up to be a bestselling author, philanthropic investor and chairman and CEO of the not-for-profit, Atlanta-based Operation HOPE. “If I motivate you, I have to come back tomorrow and motivate you again. You’re going to have to take what I’m saying and roll it up in your soul and deputize yourself after I leave and be your own agent of change.”

As the keynote speaker for NCC’s annual Humanities Lecture, Bryant will address “Reimagining Entrepreneurship: A Reset for the American Dream.” The 6 p.m. event, rescheduled from the spring due to COVID-19, is a free virtual lecture that will include a Q&A session moderated by Raja Bhattacharya, director of NCC’s Follett Family Center for Innovation & Entrepreneurship. Reserve your free tickets here.

“The American Dream is now at risk,” Bryant says. He points to the three crises facing the nation: a pandemic, an economic collapse and a social justice reckoning Entrepreneurs, particularly social entrepreneurs, Bryant argues, are poised to provide the response—and young people, including NCC students, hold the power to reignite that dream.         “The special forces team that needs to hit the field and turn negatives into positives is all these college graduates,” he says. “They need to be prepared to fight a new war with … entrepreneurship.”

Bryant’s not talking about simply pursuing business, but actually changing the world. “A business owner is trying to get something, get an income, get a standard of living, get a vacation twice a year,” he says. “An entrepreneur is trying to build something.”

Bryant’s life story is what he calls “prima facie evidence of what’s possible.”

His parents, who had high school educations, divorced over finances when he was young, he says. As a 7 year old, he witnessed a close family friend killed on the streets in a drug-trade turf war. The searing experience made him realize the risks that come from the choices made.

“I decided that was not going to be my narrative,” he says. By age 10, he was an entrepreneur. The story goes that after a banker who funded entrepreneurs visited his school, Bryant went home, looked up the word entrepreneur, then asked his mother for a $40 loan and soon opened a candy story to rival the local liquor store that also sold candy.

From there, he went on to earn his GED and start a load of businesses. Not all were successful. At one point, Bryant says he was living in his car. But by 19, he was working at an investment bank—eventually challenging the owner to make him a partner, he says. The owner scoffed at first, but Bryant persisted and got the opportunity, succeeding at bringing in millions in revenue, he says, even buying out the owner at age 23.

Even though he didn’t graduate college, Bryant thrived in the business world. In 1992, as a result of the riots around the acquittal of four police officers involved in the brutal beating of Rodney King, he used his social entrepreneurship skills to start Operation HOPE, which provides financial literacy tools and services for youth and adults.

Bryant also has advised both President Barack Obama and President George W. Bush and won numerous accolades, including selection as Innovator of the Year by American Banker magazine in 2016. His latest book, Up from Nothing: The Untold Story of How We (All) Succeed, is due out in October.

Bryant’s story is one of hope, says Bill Mutimer, associate professor of theatre and communications at NCC and the faculty chair for the National Endowment of the Humanities. “In the times we are living in, where students are concerned with the future, John Hope Bryant can show them how to make a difference,” he says, “and to give hope to those who are working toward a better life.”