Angel in the Iron Mask

NCC student-athlete Angel Lopez is playing for the Cleveland Indians. 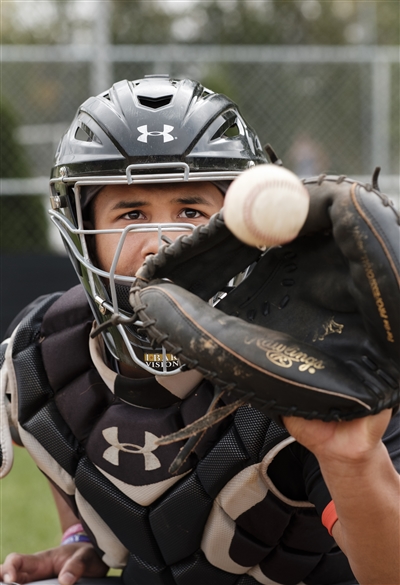 Just 12 games into his new career as a professional ball player, Angel Lopez had the kind of night hegrew up dreaming about in his hometown of Santurce, Puerto Rico, all those summers ago. The kind of game that led him to leave family and friends behind as a 15-year-old to accept a scholarship, sight unseen, to play baseball at the Perkiomen School in faraway Pennsylvania.

And it was the kind of game he envisioned himself playing when Coach Adrian Yaguez recruited the talented catcher two years ago to play for the Northampton Community College Spartans. The kind of all-around performance the Cleveland Indians hoped for when they picked Lopez in the 13th round of the Major League Baseball draft last June and immediately assigned him to their Arizona League rookie team.

On Aug. 3, 2017, Lopez caught his first professional no-hitter, calling virtually every pitch for the four Indians hurlers who took the mound against the Seattle Mariners' Arizona League squad. Only one Mariners batter reached base, on a walk, and Lopez promptly threw him out trying to steal second. "His time throwing to second base was major league from day one," Yaguez says.

To top things off, Lopez drove in the game-winning run-the only run of the night-with a walk-off, two-out RBI single in the bottom of the ninth inning.

"I was just taking it inning by inning," Lopez recalls. "I knew we had a no-hitter going on, but I didn't really want to think about it. I just wanted to focus on handling the pitchers and making sure they stayed calm and did their job, as well as me doing mine. If it happened, it happened, and if it didn't happen, then it didn't happen. That's the way I was looking at it.

"The most important thing is us winning the game. That's what we cared about the most."

Listening to Lopez, you can hear the influence of his former Northampton coach. "We've always preached it's about the team, not the individual," Yaguez says.

For all of his obvious individual talent, Lopez was part of an outstanding recruiting class the Spartans coaching staff put together in 2015. The players and coaches set a goal of getting to the National Junior College Athletic Association (NJCAA) World Series during their two years together-a goal they accomplished in May, ultimately finishing fifth in the country.

Teammate Tyler Caraway, a right-handed pitcher who went 7-1 last season with 32 strikeouts and a 3.20 ERA, recalls that Lopez made an immediate impression.

"The first time I met him, I could just tell. He had that look where you knew he was a good player," says Caraway who, along with his brother and fellow Spartans pitcher Brendon, is now attending Moravian College, where both plan to continue playing baseball. "There was just something about him that was different."

Asked when he first realized that Lopez had the potential to be a special ballplayer, Yaguez replies, "Really from day one. Just the way he carried himself."

Yet the highest compliment he can pay is that he's a good character kid. "That's what we look for, and Angel certainly fit that mold," Yaguez says. "Our kids get a great opportunity here, athletically and academically as well. We want kids who respect and appreciate the opportunity that they have here at Northampton."

Lopez blossomed throughout his freshman year, and fully came into his own during a sensational sophomore season, hitting .411 with 14 home runs, 17 doubles and 62 RBIs as theSpartans went 35-9.

As impressive as his offensive stats were, his defense was even better. Once Lopez was given the freedom to call pitches in his sophomore year, Tyler Caraway says, "He called a great game when the game was in his hands."

As the 2017 season went on, professional baseball scouts took notice, and started beating a path to Spartans games.

"It started with the Minnesota Twins. They were the first team to reach out," Yaguez recalls. "Then the Texas Rangers got involved. And the next thing you know, there's 15 to 16 scouts at a game pretty regularly for about a three, three-and-a-half-week stretch."

Knowing there were pro scouts in the stands could have easily upended the motto the team adopted before the season began: "No distractions." But it didn't.

"Coach always told me not to worry about the draft or any scouts coming to the game," Lopez says. "And there were alot of scouts-almost every game. But I didn't want to think about it that much because if I thought about it, I'm the type of person who puts pressure on himself. And that's not good. I just went out and did whatever I could to help my team win."

If anything, Caraway says, having pro scouts in the stands may have been a benefit, not a distraction.

"We knew that all those scouts were there for him, but that was just another opportunity for all of our other players to show what we have," Caraway says. "That also could have pushed us a little harder to stay focused throughout every game."

The Rangers and Baltimore Orioles brought the 5-foot, 10-inch, 194-pound catcher to their facilities to work out before the draft, signaling how interested they were. The Indians, however, held their cards close to the vest. They scouted Lopez at a game in May against Lackawanna College that was played at PNC Field, home of the Scranton/Wilkes-Barre Rail-Riders, the New York Yankees' Triple-A affiliate.

But while the Texas and Baltimore scouts texted Lopez almost daily as the draft neared, the Indians seemed to be out of the picture, with the exception of emailing Lopez to fill out the standard player medical questionnaire-the same as numerous other teams did.

A week before the draft, the Indians called to make sure Lopez - who had been accepted at West Chester University - was serious about coming out if he was drafted. He assured them he was. Lopez felt certain that he would be picked by either Texas or Baltimore by the end of the 12th round. But when that didn't happen, Cleveland called to ask if he wanted to be a Cleveland Indian. Lopez answered with an emphatic yes.

"You can't control the draft," Yaguez says. "Once other guys start becoming available that maybe teams didn'texpect to be available, it all starts to change. I really think the Orioles and Rangers were close to taking him, but the Indians got to it in the 13th round and that was it."

Growing up in a tight-knit family in the historic Santurce neighborhood in San Juan, Puerto Rico, Lopez had dreamed of being a professional baseball player since he was 9 years old. At the age of 15, he was presented an opportunity to quite literally move closer to his goal.

For two decades, the Perkiomen School, located in Pennsburg, Pa., had an established pipeline to bring talented players from Puerto Rico to Pennsylvania, where they could get an education, adjust to life inthe U.S. and have a better chance to catch the eye of college and pro scouts.

"I remember I was in practice with my team in Puerto Rico, and my coach told me that some school was coming the next day and I should go to try out," Lopez recalls. "I did the tryout, and by the next week, they sent me an email saying they wanted me and they were going to offer me a scholarship. My parents didn't want to decide for me. They told me to make a choice for myself. And I chose to go to Perkiomen School."

It was a big adjustment for a teenager who had never been away from home for more than a couple of days.

"It was hard," says Lopez. "I left my parents, my brother, my sister and my friends. I was going to Pennsylvania - I didn't really know where I was going because I didn't visit before I made my decision. So it was hard at first when I got there. I was trying to get used to it - get used to dorm life, get used to the food and all the homework we had."

In late June, after he signed with the Indians, Lopez faced another big adjustment when he flew across the country to begin his professional career in Arizona.

"I think at first he was a little homesick," Yaguez says. "Obviously, he adjusted pretty quickly. He knows how privileged he is for the opportunity he has out there. He's been away from home for a while, since he got to the Perkiomen School. It's not easy, but he's a tough kid. His parents love and support him and he's trying to make the most of the opportunity that he has."

Asked about the biggest adjustment he faced in Arizona, Lopez answers without hesitation: "Definitely the pitching. They're not throwing 86-87 (miles per hour),they're throwing 94-95."

Lopez got off to a slow start at the plate, but washitting .100 higher the second half of the season than he did the first half.

"It was hard to get used to it, but I've made the adjustments," he says. "I'm always working with the hitting coaches. I'm just trying to go out there and give it all I've got."

As proud as Yaguez is of his former catcher's on-field successes, he is every bit as proud that Lopez decided to return to Northampton after the Arizona League season ended on Sept. 2 to finish the three courses he needed to earn his associate's degree. Yaguez, who has stayed in touch with Lopez by text and phone calls over the summer, helped him choose his courses and line up a dorm room, and Lopez helped his former coach work with the baseball team last fall.

Having a player drafted by the pros "certainly is great exposure for the program and for the college, and we're proud to have been able to be a part of that," Yaguez says.

"We've done a pretty good job of attracting talented young men and I think we're going to continue to doso. We're not going to change anything that we do," he adds. "We're just going to keep marching forward and try to run the best program that we can."

As for Lopez, he is quietly confident that the best is yet to come. "I know I'm going to get better hitting," he says.

And those impressive numbers he put up at Northampton, Lopez says, "were just a little preview of what's going to come for the rest of my career at the professional level."