Art of the Shoot 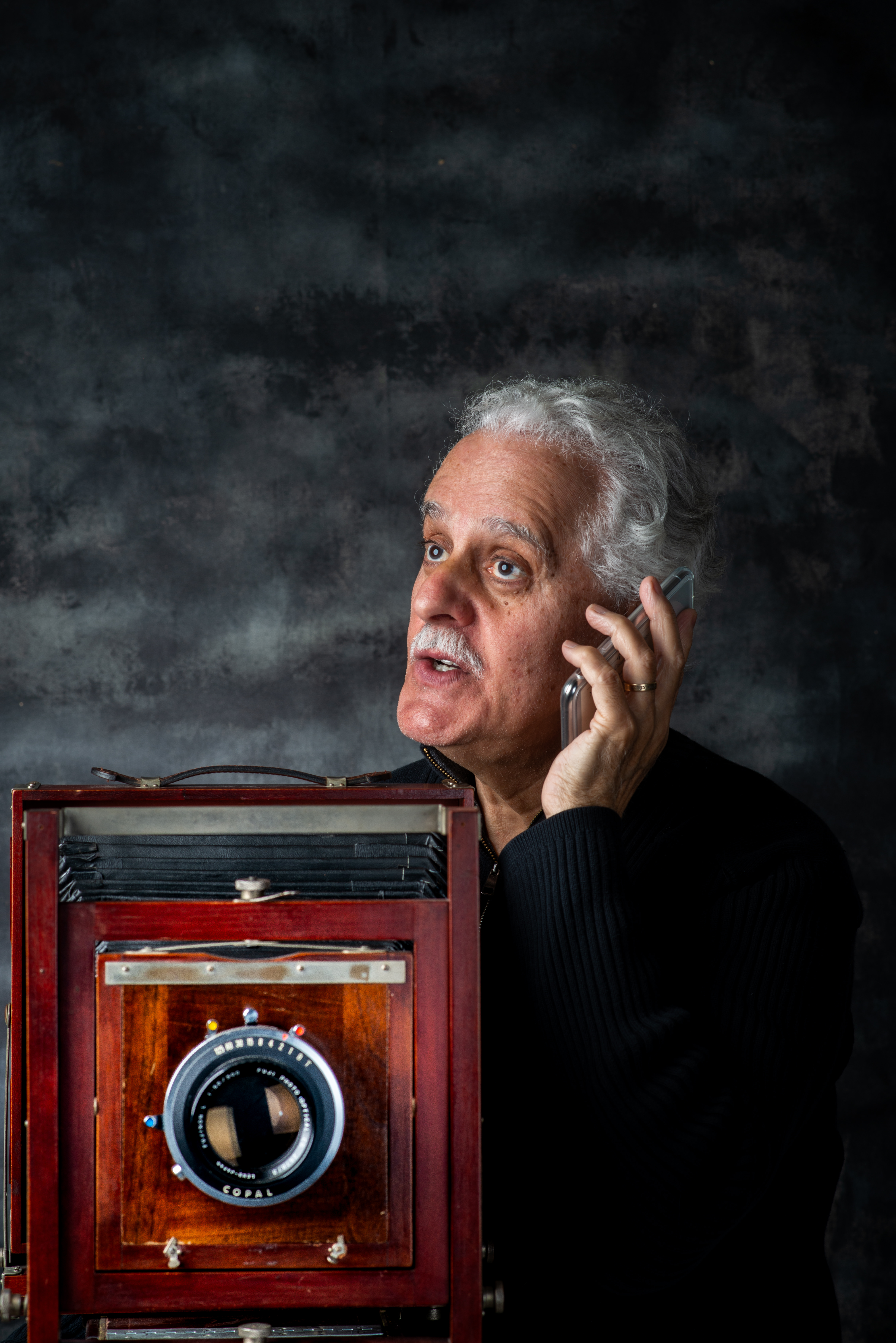 We are the most photographed society in the history of the world. With over 7.2 billion cameras at our disposal, it’s no wonder everyone fancies themselves as a bit of a shutterbug. Most of today’s cameras are technologically sophisticated, digital wonders attached to pocket-sized cell phones. They allow you to retouch and crop on the fly, posting to digital galleries in the “cloud” within moments so your work can be appreciated in real time.

It begs the question then why would anyone in their right mind haul around a large, century-old, wooden framed behemoth to take pictures that have to be carefully developed with chemicals and time-consuming processes?

Well, just ask Thomas Shillea, one of the best in the world at doing just that, and he’ll tell you. It’s the art of the shoot that matters.

Shillea knew from a young age he was destined to become a renowned artist.

Growing up in a small town just outside Scranton, Pennsylvania, he spent hours drawing pictures and looking at documentary photographs in books his parents gave him. But it was only when Shillea took a photography course for his undergraduate degree in art education at Kutztown University that he discovered his favored medium.

“It was a revelation when I realized I could make these pictures myself,” he recalls. “And from that moment on, photography became my art.” 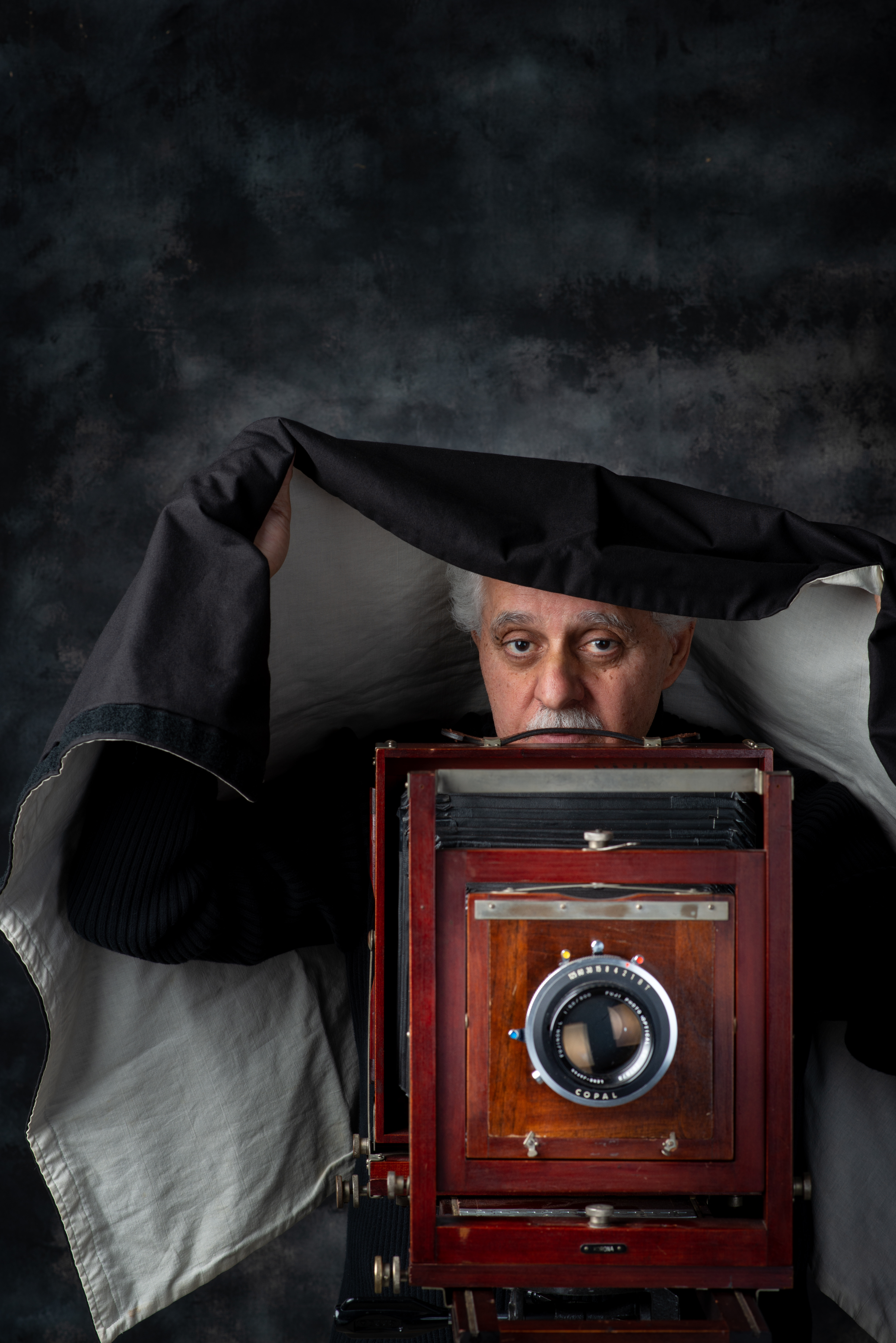 His passion for photography took many forms over the next four decades. For many years Shillea ran his own advertising photography business in Philadelphia. As an educator, he taught art in Pennsylvania public schools and photography at Rochester Institute of Technology, where he earned a master’s degree in fine art. He brought all that with him when he joined NCC 20 years ago as director of art programs.

All the while, he pursued his own work, specializing in a traditional type of photography known as platinotype, or platinum printing. This method, which dates back to the late 19th and early 20th centuries, was pioneered by the renowned photographer Alfred Stieglitz in portraits of his wife Georgia O’Keeffe, but fell out of favor after World War I.

Today, the slow and methodical art of platinum printing is practiced by only a handful of master photographers, which would suggest that Shillea, 72, is an outlier in the age of selfies and digital photography. Yet a recent retrospective of his work at Santa Bannon Fine Art in Bethlehem revealed an artist who is not afraid to take risks by combining cutting-edge technology with what he calls “the pure photographic process” of making platinum prints.

Giving a tour of the exhibition on a rainy winter afternoon, Shillea pointed out his earliest, brightly colored paintings and drawings from the ’60s, inspired by the Vietnam War and the Beatles. Much of the show, however, is devoted to his muted monochromatic platinum photographs, including evocative portraits of his wife (and gallery principal) Santa Bannon, still life studies and landscapes.

Perhaps Shillea’s best-known photographs are his portraits of famous Americans including President Ronald Reagan, civil rights activist Coretta Scott King and actor Sissy Spacek, some of which are in the collection of the Smithsonian Museum’s National Portrait Gallery and the Museum of African American History and Culture. The show comes full circle with newer mixed media works.

For a first-time viewer, though, the portraits of famous Americans might best illustrate the beauty of platinum prints, with their rich, velvety texture and contrasting shades of black, gray and white. In these portraits, which look more like etchings than photographs, the sitter is shown as formally posed against a painted canvas backdrop Shillea used for every portrait. Yet the portraits also capture “the essence of their life,” as he puts it, in their posture and dress and the way they gaze at the viewer.

To create a platinum print, Shillea uses a 100-year-old wood-and-brass view camera set on a tripod, so shooting a picture is a painstakingly slow process. “It’s not click-click-click blasting,” Shillea says. “It’s more like a painter working with a model, a collaborative effort.” This allows him time to establish a relationship with the subject — the only exception was when he photographed President Ronald Reagan and the secret service ushered him out of the Oval Office after only a half hour.

In the 1985 portrait of Coretta Scott King, for example, taken in her hotel suite in Washington, D.C., it wasn’t clear at first what she should wear. King suggested a power suit, but Shillea preferred she not look like a businesswoman. After some discussion, she pulled out a traditional royal African robe she had received on a recent trip to the continent.

In the portrait, she appears serene and dignified in the floor-length outfit as she sits in a comfortable chair. (King’s youngest daughter, Bernice, used the portrait in a tweet on Martin Luther King Day 2019, unfortunately without acknowledging Shillea as the photographer.)

For the Sissy Spacek portraits, Shillea spent time at the actor’s horse farm in Virginia. She too had just come back from a trip — to China — and for her portrait they decided she should wear a traditional, Chinese-inspired black dress she had brought back.

In several images, we see Spacek standing next to a simple Shaker chair, her hand resting on its high back. She has a severe expression on her face rather than a celebrity’s smile. “When you see the portrait of Sissy — with the chair, the clothing, the background and the lighting — you see everything,” Shillea explains. “The picture is a sum of the parts of who she is.”

Developing a platinum print is as time-consuming as shooting the picture. Chemicals are hand mixed and brushed on archival paper and exposed to ultraviolet light, and the image is first seen only faintly until it is developed in a chemical solution of potassium oxalate to reveal the full image. It might take entire days to print a limited edition of photographs, as the artist manipulates each image with a few drops of the right sensitizer chemicals to add warmth or greater tonal contrast to the print. 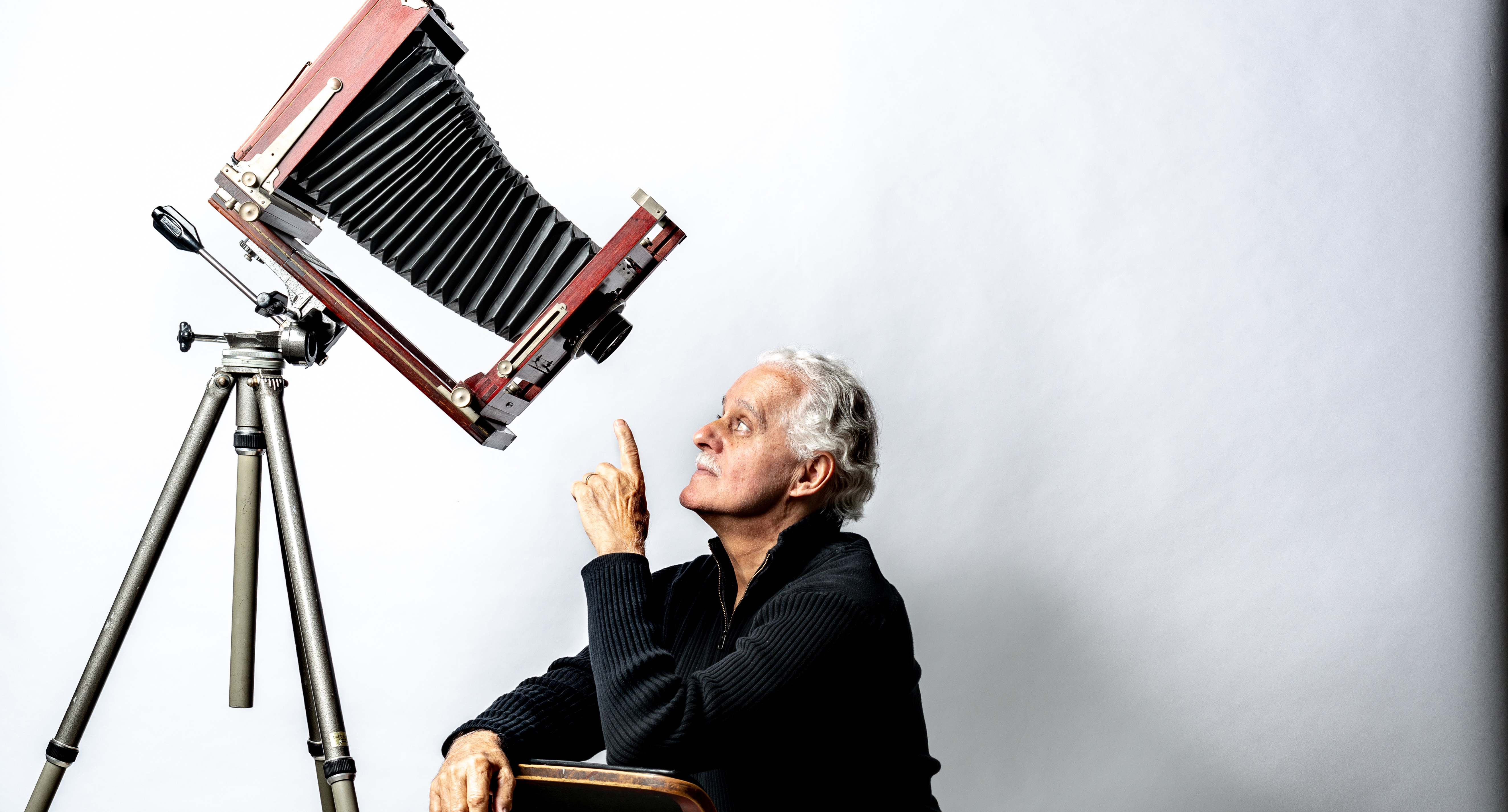 The process, Shillea says, “brings together craft, chemistry, science and art” so that each individual print becomes a unique object.

Platinum prints are also incorporated into his newer, inkjet-printed mixed media projects. In these he often repurposes his vintage platinum photographs from 30 years ago with his recent digital photographs or images from, say, the Sistine Chapel, shot on a recent trip to Italy, or appropriated shots of Japanese Kabuki artists or sumo wrestlers seen on a trip to Japan.

Shillea says he is entirely comfortable with this new technology — he teaches a class in digital photography at NCC — and is intrigued by the possibilities it offers for experimentation and the evolution of the medium.

For his next projects, Shillea wants to explore Chinese and Indian art to inspire new mixed media images he will combine with platinum prints. “The strength of digital photography is that it gives artists a chance to blend different media to create something new,” he says. ”I wonder what Alfred Stieglitz would do with this new type of photography?”