We're so proud of our students! 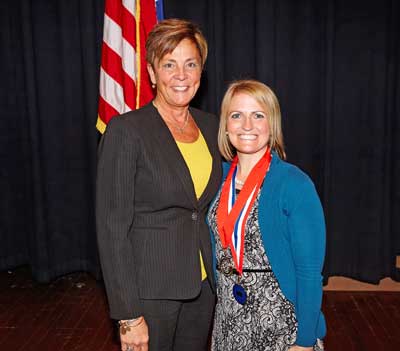 After some welcoming comments from Dr. Michael McGovern, interim vice president for academic affairs, in which he expressed pride in the honorees and recognized the contributions of their families to their success, Annette Bruno, associate professor of education and last year's recipient of the Christensen Award for Excellence in Teaching, gave a few remarks.  She was happy to honor students who "have done it and done it well" overcoming obstacles and proving outstanding in many ways.  McGovern called the awards recipients "the best and the brightest."

Dr. Mark Erickson, president of NCC, noted that this academic year has been an outstanding one for leadership: four NCC students won national acclaim.  He introduced Aaron Rosengarten, who is the first NCC student to be named a Coca Cola New Century Scholar based on grades, leadership, activities and application of intellectual talents beyond the classroom. Rosengarten is the only New Century Scholar from Pennsylvania.

He was also one of only 20 students in the nation chosen for the All-USA Community College Academic Team from more than 1700 nominations in a program sponsored by Follett Higher Education Group and presented by USA TODAY with support from the American Association of Community Colleges and the international honor society for students at 2-year colleges, Phi Theta Kappa.

As recipient of the Trustee Leadership Award, Garis spoke, encapsulating the three outstanding qualities she has experienced at NCC: community, unity, and empowerment.  As a non-traditional age student, a mother and a wife, she said she felt scared returning to school.  But the warmth of community at NCC embraced her. She felt accepted and found other nontraditional students who befriended her.  She quickly became a leader at the College.

A common purpose, the bonds among students, faculty and staff all striving for academic and personal growth inspired her with a sense of unity.  As a member of the Student Leadership Class, she discovered self-knowledge and a focus on her assets.

She said that she never felt so empowered as she has at NCC.  "I was pushed and challenged to be the best woman and person I can be," she said.

The Student Leadership Class had a great impact on her, as did the documentary Misrepresentation, which explores women's depiction in the media, and reading Half the Sky: Turning Oppression into Opportunity for Women.  All of these influences determined her to empower all people, a goal she eventually hopes to achieve through founding a center for holistic healing and empowerment.

Awards received at previous ceremonies include:

View more photos from this event in this photo gallery.