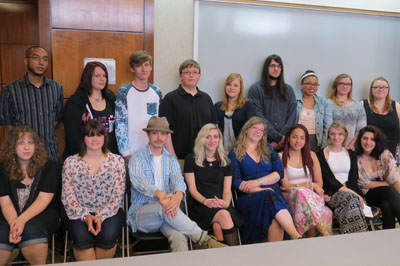 "I've been drawing ever since I can remember," Sabrina Meixsell said at the artists' talk for the final, capstone group exhibition for Northampton Community College fine art students on April 30.  It was a sentiment echoed by many of her classmates.

"I got my start drawing the old covers of VHS Disney tapes," Courtney Cuvo shared.

A photo of his younger self painting at an easel popped on the screen as Zachary Bouman explained, "I have always been an artist and will always be an artist."

Exploring the woods around her house as a child gave Taylour Green a deep appreciation for the natural world that continues to inspire her art work to this day.

When Ashlyn Summers was in first grade, she was told by her teacher that her art wasn't good because she used too many colors. "It was the first time I got in trouble at school because I told her she wasn't a very good teacher." Summers, who herself is teaching preschool now, has been asked to develop the school's art program.

Others had family members who helped them develop as artists.

"I started as a young child. Both my grandparents are artists. My grandfather taught me to draw, sketch and do watercolor," Karli Williams said. 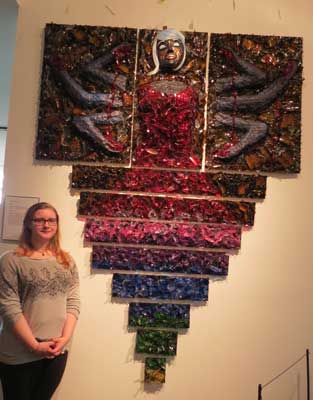 Logan St. Clair was taken on photo shoots by his stepfather, who has since passed away. His stepfather worked as a photographer for The Grateful Dead. "I continue his legacy," St. Clair said. "I take photos in memory of him."

Others took a little longer to find their calling. "It took me awhile to find myself as an artist and pick up what I was good at," Aidaluz Martinez said as she described her discovery of how drawing fashion models inspired her. It led her to create wearable works of art for her final project, three dresses.

Yet all shared the same experience of learning drawing, ceramics, painting and multi-media techniques as NCC fine arts students. And all were encouraged to follow their own paths for their final exhibit piece.

"My blood, sweat, and tears went into this piece," Carrie Weiss said of her mixed-media sculpture made out of broken glass. "I actually cut myself."

As for the future, some of the students are going to continue their education at Tyler School of Art at Temple, Cedar Crest, and Moravian.  Others have plans to work while some still have classes left to take at NCC. All are excited for the future.

"Art is my go to place, my happy place," enthused Sharron Caminos.

When the talk ended, the opening reception for "Sense and Perception" was held in Laub Lounge, on the second floor of College Center. A reception for the Fine Arts 2015 was held afterwards in Communication Hall.

The students featured in the Fine Arts 2015 exhibit are: 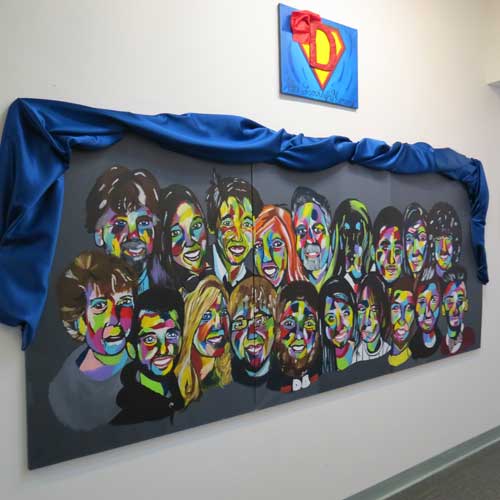 Three students were chosen by faculty as show winners:

The exhibit is on display in Communication Hall until May 4. See more photos of the artists and their work in this photo gallery.