One smile at a time! 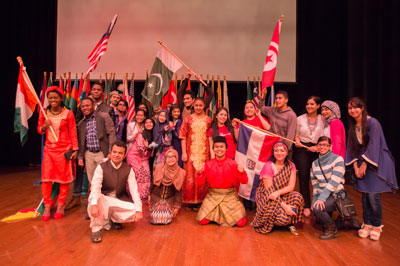 The celebration began with the annual flag parade. This year's was different. Usually a joyful affair, the students somberly marched into Lipkin Theatre and assembled on stage while the French national anthem played. Then a moment of silence was held to honor the victims of the Paris attacks.

After the remembrance, the smiles returned as eager students proudly shared information about their home countries and performed for the audience of fellow students, faculty and staff.

"Sorry, I've never heard of it. Do you mean Indonesia?" is something students from Tunisia hear all the time. "Tunisia is in North Africa. It has a rich history and cuisine that uses different spices from all over the world, but the generosity and kindness of its people, and the deep relationship between the Tunisian and his family are what make this country special."

Not only is Pakistan a diverse country where over 1,600 languages are spoken, but 50% of the world's soccer balls (footballs) are made there, students shared.

The archipelago of Indonesia, made up of 17,000 islands, is home to beautiful beaches, flowers and monuments as well as the popular tourist destination, Bali. "There is unity in diversity. We are many. We are one. We are IndONEsia."

The mixes of cultures in Peru have created a wild diversity in art, cuisine and music, according to students from the South American country.

While Japan is known for technology, especially cars and cameras, the science behind the Shinkansen Super Express, high speed trains that travel over 200 miles per hour, makes Japanese student Rina proud of her country. She also shared Japan's culture of manga and anime.

The Democratic Republic of Congo should not be confused with the Republic of Congo, explained student Nathan. The "heart of Africa" is home to the Congo River, the second largest river on the continent, and okapi, a mammal found only there. Nathan is especially missing the Congo dish kwanga, a mixture of cassava root and banana, stuffed into a banana leaf and eaten with fish or meat. 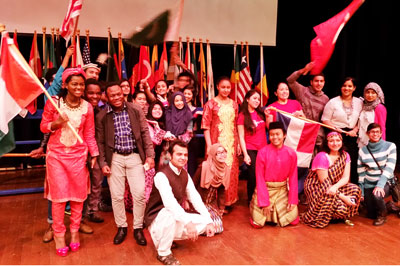 The audience was entertained by singers and dancers, including the traditional Zapin dance which originated in Arabia and brought to Malaysia by traders centuries ago.

"When I first came here, I thought I would learn American culture and that would be the only thing I'd focus on," ISO President Muhammad shared. "But spending so much time with the other international students made we want to learn about other countries, too. After speaking to students from Peru, I want to go to Peru. After speaking to students from Malaysia, I want to go to there. I want to visit a lot of countries now!"

After an event filled with so much pride and enthusiasm, most likely many people in the audience shared Muhammad's desire.

Watch the video coverage on WFMZ, a video montage of the event on YouTube, and check out more images in this photo gallery.