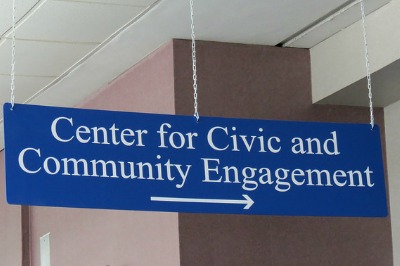 Love was in the air at the grand opening of Northampton Community College's Center for Civic and Community Engagement on April 27.

Guests sported buttons that proclaimed "I'm engaged."  That might have raised a few eyebrows since many of those guests are already married, but the buttons signify "engaged in the community."

"Our middle name is community," said the College's president, Dr. Mark Erickson.  "It is more than our middle name.  It defines our mission, what we do and how we do it. It is also one of our recently adopted 5 Areas of Strategic Focus."

The creation of an official "center" and its location in a prominent spot on campus reflect that commitment, Erickson said.  It will function as a "front door," welcoming the community in, "a beacon telegraphing our mission," and a "launching pad, pushing students out" to "live infused by the values this Center represents."

Erickson credited Dr. Paul Pierpoint, NCC's vice president for community education, for being a tireless champion for the Center and for moving the initiative forward.

Pierpoint noted that NCC has a long history of community and civic engagement.  "At soup kitchens, food banks, shelters, schools and elsewhere ... you will find NCC students and staff engaged.

"With this Center NCC is upping its game," Pierpoint proclaimed.  "We want NCC students to know that they are 'The Big They.'  Instead of saying 'they should do something about homelessness, hunger and education ... or whatever issue you can imagine, we want to change the pronoun [so students say] 'I should do something.'"

Pierpoint said that many colleges have centers for community engagement that function as volunteer centers -- an approach that he views as "noble but ultimately short-sighted.  Our center wants our students and our graduates to be much more than volunteers treating the problems of our community.  We want them to be solvers of problems."

Even before NCC's Center for Civic and Community Engagement had a physical presence on campus,  it was a "beacon" for first-year student Patrick Grifone.  Speaking at the grand opening, Grifone said that when he came to college he wanted to continue the community service work he had found rewarding in high school.  The Center's staff showed him ways he could get involved, culminating in his involvement in organizing NCC's Day of Service earlier this month.  He sees "unlimited potential" for the Center.

Professor of Speech Communications Donna Acerra, who has incorporated service learning in many of her courses, praised the Center's director Deb Bohr for "developing a culture of service" at NCC and for "always being open to new ideas" for ways to combine learning and community service.

Several speakers thanked Diane Martin, chair of the college Foundation, and her husband Chris, an NCC alumnus, for generosity that provided technology and furnishings for the Center.  The cheery color scheme and the contemporary furniture were selected by students.  A focal point of the center is a striking mural created by fine arts major Zack Bouman and communications major Evan Carrigan to show energy radiating out from the NCC logo in the center into the community.

Other special guests at the ceremony included members of NCC's board of trustees and Foundation Board, community partners and elected officials.