Transformations!  From "seaweed" to "pearls," from liquid nitrogen to ice cream:  Chef Rose Forrest showed an audience in Lipkin Theatre how to make 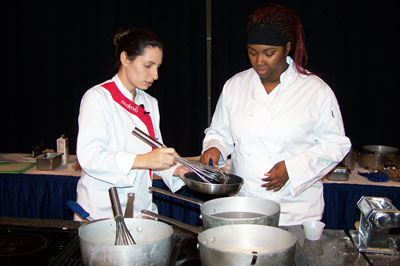 these tasty and unusual treats and others at a cooking demonstration at Northampton Community College's (NCC) on October 26.  The demonstration and a dinner the next day were parts of the Robert C. Wood Chef-in-Residence program at the College.

Culinary students and members of the community got to watch the preparation of and taste duck egg pasta, confit duck, wilted watercress and rose hip butter; beet and bleu panna cotta, balsamic pearls and purslane; and fig and honey liquid nitro ice cream.  "Come up here and join me," the friendly and personable chef said to the culinary students, inviting them to cook alongside her.

Like many chefs, Forrest started her career in high school, working in restaurants.  A supervisor noted her fondness for cooking and recommended that she enroll at Johnson and Wales University.   In the years after graduation, she worked in New York City restaurants and at Brown University.  In 2006, she purchased a kosher catering company that provided meals to clients throughout Rhode Island, Connecticut and Massachusetts.  Wishing to spend more time with her husband and children, she eventually sold the business and became Sodexo's regional chef for New England.  She now teaches cooking throughout the region, focusing on molecular (physical and chemical transformations of products) and modernist cuisine (cooking as an art and a science) featuring local and wild edibles. Her philosophy animated the demonstration at Northampton from start to finish.

Her most dramatic production of the evening turned out to be ice cream.  Assisted by students wearing protective goggles and gloves, she poured liquid nitrogen from a canister into a custard she had made on stage moments before.  On contact with the ultra-freezing element, the custard mixture spouted huge puffs of glacial steam.  The result?  A silk-like, creamy ice cream minus the usual crystals.  Ice cream can be made with unlimited flavors, Forrrest said.  She has even made popcorn-flavored ice cream.

Creating balsamic pearls also resembled wizardry, although the process is consciously scientific.  To make the pearls, Forrest added agar-agar, a seaweed derivative, to some balsamic vinegar, brought the dissolved mixture to a boil, cooled it, and dropped the solution by syringe into a tall glass of refrigerated oil.  Presto!  The pearls appeared looking like tiny olives.

In all she prepares, Forrest seeks freshness.  "I've always been interested in nature, gardening and hiking," Forrest said, and in accordance, she became acutely aware of wild edibles and fresh produce.  "I like to utilize what's around me."  She uses purslane, rose hips and herbs from her garden.  She purchases fresh produce, such as the beets she used in the demonstration, from area farms.

Altogether, Forrrest loves cooking because it engages all the senses. She loves the colors revealed when she peels a peach or cracks a duck egg.  Culinary careers, she pointed out, give chefs the chance to travel the world.  "You can be a chef anywhere.  If you want to live in France, you can do it," she said.

She offered the following fruitful advice to students:

•Owning a business can consume your life.  If you decide to follow this path, make time for your family.

• If you do a function for 200 people, make sure that you think about what is involved in preparing a dish-the time and efficiency needed.

• Rather than bemoaning your mistakes, learn from them.  Becoming a chef involves trial and error.

• It's all about creativity; that's why chefs get into the business.

•Share ideas with each other.  Social media greatly facilitates this.

Contemplating her own fulfilling career, she said, "now is an amazing time to be a chef."

Hospitality students helped out at the cooking demonstration by serving samples and setting up.

The next Chef-in-Residence will be Daniel Goulet, a Northampton Community College graduate who is the executive chef at Lords Valley Country Club.  If you would like to receive an invitation to the cooking demonstration on April 4 or the reception and dinner on April 5, email bweppel@northampton.edu.  Reservations are accepted on a first-come, first-served basis.

The Robert C. Wood Chef-in-Residence program was established by the Wood Company (now Sodexo Wood) in 2000 to give culinary students the opportunity to work side-by-side with chefs from some of the region's top restaurants. While on campus, the chefs also share some of their favorite recipes with the public during a cooking demonstration and special dinner.  Proceeds from the demonstration and the dinner benefit the Hotel, Restaurant and Culinary Arts Endowment Fund at NCC.