What do you get when you mix cups of artistry, dashes of imagination and ladles of talent, along with lots of hard work?  Some very delicious dishes! 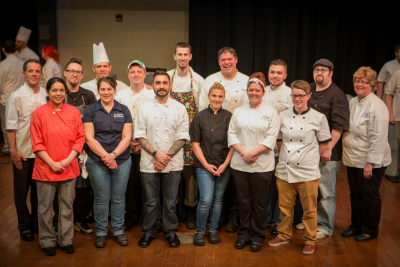 Looking out upon a packed house of students, community members and NCC culinary arts program alumni, Dean of Business and Technology Denise Francois praised the chefs for "going on to do wonderful things and making us proud."

"You're only as good as the people around you," said Associate Professor Chef Scott Kalamar, and indeed a major theme of the evening was the camaraderie of the culinary community and the cooperation it takes to create a memorable meal for diners.  When asked where they like to dine out, the chefs said that they enjoy visiting their culinary classmates' restaurants.  Associate Professor Chef Sue Roth loves to drop in at her former students' workplaces and see their success.

As they cooked, the alumni chefs gave tips to new culinary students.  While preparing duck rillette croutons made from leg meat and breaded, Doyle and Schneck talked about the need to be adaptable, as food trends change.  Smaller plates and family-style dining have become current in-demand dining modes.

Elterich and Goulet shared the Lipkin Theatre stage as they once shared the NCC culinary arts kitchen as teacher and student. As scallops sizzled in a pan, Elterich commented that he wants the seafood to "sing" to him, signifying that it is frying at the optimal temperature.

Baxter and Thatcher showed how a culinary smoking gun can be used to prepare smoked steak tartare and discussed how new technology makes possible new dishes that didn't exist before, such as noodles made from shrimp.  A few years ago, Baxter was the first winner of the NCC culinary contest for a weeklong opportunity to work in Emeril Lagasse's New Orleans restaurant.

The aroma of caramel wafted through Lipkin Theatre as Fischer and Stem drew from childhood memories, using Captain Crunch cereal and grape jelly as components in a panna cotta.  Placing sheets of gelatin into ice-cold water, Stem showed how this ingredient has "magical powers" when activated.

The chefs frankly discussed the sacrifices and struggles of their profession...missed family holidays, evening and weekends away from spouses, absences from birthday parties.  Nonetheless, they love what they do.  "Not every day is easy, but every day is good," said Elterich.  "You need to have passion," said Goulet.  "Your passion will drive you to push through."  The chefs also credited having compatible colleagues and a good support system.

Chef Kalamar recalled the culinary arts program history, which began with the vision and foresight of the late NCC President Robert Kopecek.  "We are watering the foundation," Kalamar said.  He noted that a variety of family traditions inspire culinarians' cooking and that it is fruitful when these honored customs boomerang off each other.  He urged culinarians to be open to new ideas.

Proceeds of the Chef-in-Residence program benefit NCC's culinary and hospitality programs.  The twice-a-year event is underwritten through an endowment established within the NCC Foundation by the former Wood Dining Services, now Sodexo.  The event was one of many celebrating NCC's 50th anniversary.