The Family that Graduates Together ... 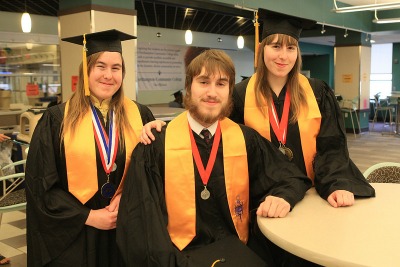 She majored in secondary education and was a member of the College's honors program. She helped lead the Ban the Bottle Committee, which seeks to reduce the use of plastic on the Bethlehem Campus.  Rachel also served as the vice president of Phi Theta Kappa, the international honor society for students at two-year colleges; was president of the Sign Language Club; and served as the treasurer of the Honors Club.  In her spare time, she tutored English as a Second Language.

She plans to transfer to Bloomsburg University, where she will major in Mandarin Chinese with the goal of teaching the language in the United States.

Rebecca Cimera, Rachel's twin, took part in the Student Leadership Class last year and was active in the Honors, Engineering and Self-Defense clubs.  She earned membership into Phi Theta Kappa.  She was also on the Sustainability Committee and was a SMaRT (Science, Math and Related Technologies) scholar.  She plans to continue her education in order to become an electrical engineer and is busy deciding which school she will attend.

Like his sister Rebecca, Matthew David Cimera strives for an engineering career, but in mechanical engineering.  He is continuing his education and is weighing his options regarding a four-year college or university.  He took student leadership seminars, was on the Dean's List every semester, served as president of the Engineering Club, and was a member of Phi Theta Kappa.  He was also a SMaRT scholar.

The Cimera siblings are graduates of Freedom High School and are all graduating from NCC with honors.