NCC students head to Harrisburg to fight for the environment 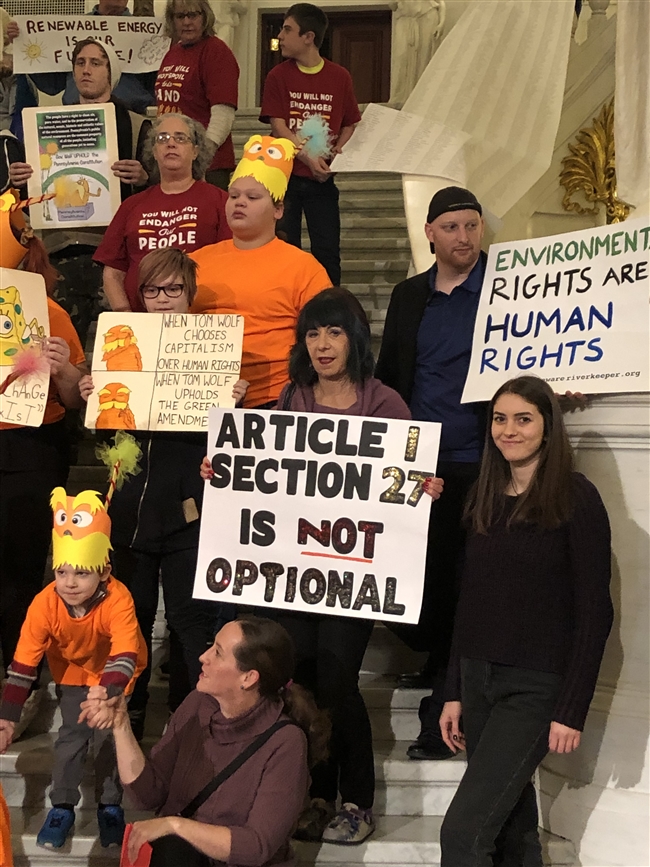 Northampton Community College’s Climate Action Network (CAN) club members, Dan Stevens and Melanie Attieh, spoke on the topic of preserving what’s often referred to as PA’s Green Amendment at the Better Path Coalition event on January 28, 2019, in Harrisburg. Governor Tom Wolf and PA lawmakers were present to listen to students and youth who came together with more than 9,000 petitions to keep this amendment.

“Article 1 Section 27 is vital to the state of Pennsylvania, not just because it is where I call home, but because half of the state is home to the Marcellus Shale which is the second largest natural gas field in the United States and one of the largest in the world,” said ​Melanie Attieh​

The focus of the event was to embolden state representatives to uphold Article 1 Section 27 of PA’s constitution stating, “The people have a right to clean air, pure water, and to the preservation of the natural, scenic, historic and esthetic values of the environment. Pennsylvania’s public natural resources are the common property of all the people, including generations yet to come. As trustee of these resources, the Commonwealth shall conserve and maintain them for the benefit of all the people.” Pennsylvania and Montana are the only two states that include this amendment in their constitution.

Daniel Stevens, who’s speech focused on NCC’s climate preservation efforts, said, “We cannot continue the way we are. It’s not a matter of one person saying, ‘Oh, let me recycle.’ No there needs to be a change in societal mindset. It takes each and every one of you to get out there, and make a difference.”

NCC CAN students make strides in their daily life to protect and preserve the planet. Weekly climate awareness sit-ins are a part of spreading the word to other NCC faculty, staff and students. In conjunction with NCC’s Sustainability Committee, CAN is working hard to convince NCC to eliminate single-use plastics and Styrofoam in the cafeteria. So far, they have collected over 250 signatures, including President Mark Erickson’s, as well as several student clubs and campus organizations. If you would like to sign the petition visit tiny.cc/ncccafe.

CAN students will be spending their spring break at the Climate Reality Leadership Training, March 14 -16, 2019 in Atlanta, GA, choosing to drive instead of fly in order to limit their carbon emissions. Students also make an effort to plant trees to offset their carbon footprint when they travel to places like Atlanta or Harrisburg.

CAN Advisor and Geography Professor Anita Forrester says of students’ work, “The members of NCC Climate Action Network are driven by what they feel is a lack of action by our communities and legislators here in the US and globally to combat climate change. According to the Fall 2018 IPCC report, we have now 11 years to make radical changes so that our climate continues to be a place that will support the current ecosystem and so that our health, agriculture, economy and peace is not threatened by climate change. The students want to ensure that our future, their future will still be here.”

CAN students will be sharing their experiences in helping to preserve the planet at the Sustainability Symposium at NCC’s Bethlehem Campus on April 24, the same day as Bethlehem’s Earth Day. The 2nd annual symposium will be held at the Bethlehem campus with presentations and workshops in CC220 from 8 a.m. – 8 p.m. and Earth Day festivities in the Quad from 10 a.m. – 3 p.m.