A morning of meeting and sharing

On April 27 the Honors Intercultural Communications class hosted a Syrian cultural appreciation event, a culmination of the class's inquiry into the Syrian-American 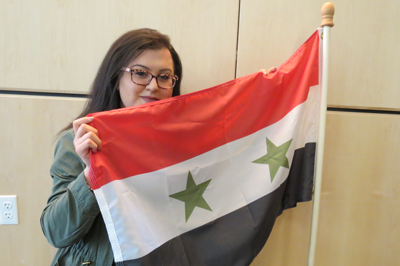 community in Allentown, which included one-on-one interviews with Syrian refugees.

Syrians started immigrating, family by family, to the Lehigh Valley in the 1880s, said a member of St. George's Orthodox Antiochian Church, Nasser Sabbagh, who prepared Middle Eastern food such as the parsley salad tabouli, for the get-together.  Searching for better educational and living opportunities, they chose the Lehigh Valley because its geography reminded them of their hometowns, a cluster of Syrian Christian villages in a valley.  Throughout more than a century, Syrians kept arriving in the Lehigh Valley, until, today, there about 20,000 Syrian Americans here, constituting the third largest Syrian American community in the United States.

The immigrants entered the professions and founded businesses, becoming an important and integral part of the Lehigh Valley.  Members of the community are close, getting together for holidays and festivals.  The church holds an annual heritage festival that attracts 23,000 people.  The congregation is also active in helping refugees from the Syrian civil war.

Hope Sabbagh, Nasser Sabbagh's niece, presented slides, accompanied by Syrian music, that showed cultural traditions such as dancing, boat-building, camel-herding, and crafts.  She also showed pictures of a special children's day for orphaned Syrian children, funded by her church and hosted by a sister church in Syria.

"We are trying to keep our cultural traditions alive through the present crisis," Hope said.

Until the outbreak of the civil war six years ago, Hope said, Syria's Christians and Muslims lived harmoniously.  Some video clips recorded meetings among leaders of the religions gathered for a prayer meeting for peace for their country and the world.

"We have much to learn from each other," said Raicha Kamara, an NCC student who emceed the event, which was attended by students, administrators and staff seated 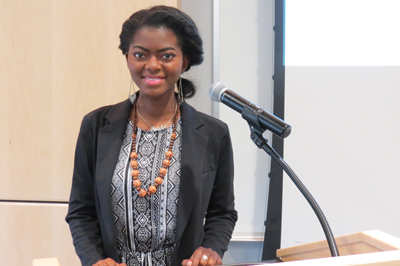 at round tables.  She quoted President Joh F. Kennedy, who said that "we can make the world safe for diversity."

"In our class, we learned to talk and interact with people from another culture," said NCC student Kylie Buscemi.  "We implemented what we learned in the intercultural communications class and to value differences among people and appreciate their being here."

Students also noted the similarities they found among the refugees and themselves.

The event at NCC was a morning of meeting and sharing.