If Stephanie Rivera was a student at NCC Monroe this spring, she would have been in the thick of preparations for Déjà Brew held on March 25. 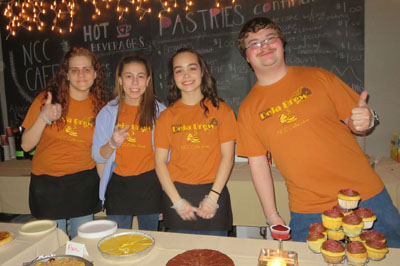 Stephanie was an officer in Student Governance and a leader in many activities on campus until she was tragically killed in a car accident in 2009.   Although most current students never got to meet her, they know all about her because of Déjà Brew - a popular coffeehouse held every semester in her memory.  The event raises money to help students buy textbooks.

The coffeehouse has become so popular that a line formed in Pocono Hall as the 5 p.m. start time approached on March 25.  When the doors opened, students filed in quickly and found seats with their friends on sofas and at round tables in the softly lit Community Room as the cover band SideArm launched into the opening set.

When the acoustic trio took a break, criminal justice major PJ Nolan, serving as emcee, paid tribute to Stephanie before introducing the student entertainers who had competed for the opportunity to perform.  Singers, strummers, poets and keyboard players were enthusiastically received.

Music wasn't the only draw.  Déjà Brew has become famous for a mouth-watering array of homemade desserts including "life-changing cupcakes" baked by adjunct faculty member Jenn Bell who knew Stephanie and who started Déjà Brew back in the day.  Now students take the lead in planning and running it.

One of the students who worked on the committee for the first time this spring was Danielle Wynn.  When she attended her first Déjà Brew, Wynn couldn't get over how 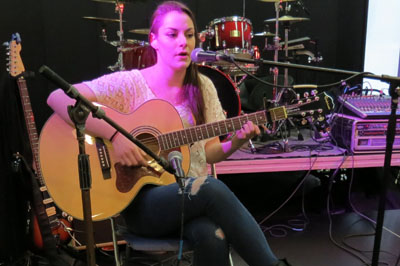 nice the atmosphere was.  "I just kept coming back," she says.  This year she volunteered to help, serving as a judge at the student auditions and handling publicity.  Danielle and other "rookies" were guided by veteran committee members like Anthony Giedman.  In addition to being a judge, Giedman kept the event running smoothly, making sure the performers were ready when it was their turn on stage.

Stephanie would have been proud.

Enjoy photos of the coffeehouse here, and visit  Déjà Brew's Facebook page to read more about the student performers.