In an impassioned and historically far-ranging talk at Northampton Community College on January 29, Reverend Gr 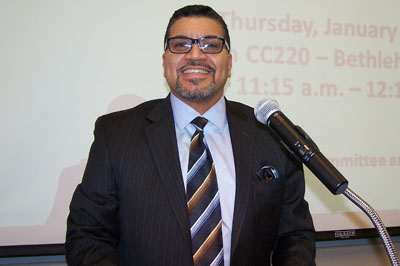 egory J. Edwards, senior pastor of Resurrected Life Church, separated the unreal images many people would like to perceive from the real picture of educational inequity across the country, including the Lehigh Valley. The talk was part of NCC's month-long celebration of the legacy of Dr. Martin Luther King.

This "dissonance of the soul of America and the psyche of its citizens is no better illustrated than the myth and mayhem of our nation's public schools," he said.

The history of educational unfairness, Edwards said, goes back to the notions of Thomas Jefferson, who advocated a two-track system of schooling, one for the "laboring" and another for the "learned."  Inequality stretched to encompass a ban on teaching slaves to read, the creation of "reform schools," and legally segregated schools. In 1896, anti-voting measures intended to restrict the franchise to whites, kept black Americans from the voting booths through intimidation and violence. In Mississippi, only 6.7% of black citizens were registered to vote.

But, through the courage and character of young people, the status quo was about to be challenged and changed, Edwards noted.  By 1964, ten years after the Supreme Court ruled racially segregated schools to be inherently unequal, the field was fertile for a Second American Revolution, the Civil Rights Movement. In that year, black college students initiated Freedom Summer, a drive to register black voters and provide an alternative education to black children in Mississippi.

Participants in Freedom Summer, 90% of whom were recruited by Robert Moses from the North, included black and white students, many of the white cohort Jewish, Edwards said.  These students worked alongside the black residents of Mississippi communities and professionals such as doctors and lawyers who volunteered to help.

The freedom schools offered a summer alternative to the segregated, underfunded and isolated public schools set up for black children. They taught curricula that the public schools of the time did not and delivered the education in a different manner.  Students learned about their cultural legacy and black history, about Constitutional law and voting rights.

In addition to the 3 Rs, the schools instilled resilience and self-confidence.  "The overarching goal was to teach black children to think for themselves, to deconstruct a colonialized mentality, and to know that they came from a great people, who included the first scientists, doctors and philosophers."

The schools practiced close interaction and mutual trust between instructors and students.  The schools succeeded because the curricula linked to students' political, social and economic realities.  "History, culture and color differences were not seen as deficient but rather as something to be discussed," Edwards said.

Today, Edwards said, some public schools' policies like zero tolerance force children out of school for throwing a pencil.  Encouragement of critical thinking is replaced by exercises geared to passing tests.

He talked about the "cradle to prison pipeline," and middle-school black boys who are "shut down," "shut up and shunned," unlike their white counterparts, who also display early adolescent behavior.

Edwards decried the "chartering and dismantling" of public schools by private entities.

He talked about the "unlevel landscape of the Lehigh Valley," in which spending per student differs drastically according to a community's affluence or poverty.

"Children need a different kind of education," he said.  Hence the rise of freedom schools, a project of the Children's Defense Fund, headed by Marian Wright Edelman.

In freedom schools, such as the Jim Lawson Freedom School which Edwards directs in Allentown each summer, students are called scholars and classrooms are called learning environments. Instructors are designated servant leader interns.  Love, safety and personal power form the cornerstone. Freedom schools, which number 120 in 107 cities, emphasize community.  Their approach follows the African proverb "I am because we are."  All children, Edwards said, can learn, but they must be loved and have a sense of connectedness in order to do so.  Freedom schools call on parents to be sources of emotional and educational support.

The presentation ended with two videos, one of the Jim Lawson Freedom School students dancing and another of the song "Something Inside So Strong," by South African songwriter Labi Siffre.

In addition to being senior pastor of the Resurrected Life Community Church in Allentown, Edwards is the president and chief executive officer of the Resurrected Community Development Corporation, a nonprofit organization with a vision of creating excellent communities and empowered residents. This entity is the parent organization for the Resurrected Life Children's Academy, the Jim Lawson Freedom School, and Campaign for Change; a grassroots student-parent entity focused on eliminating educational disparities through nonviolent social change.

Reverend Edwards earned a bachelor of science in urban ministry leadership, a master's degree in divinity, and certification in community economic development. He is an alumnus of Geneva College, the University of Delaware's Graduate School of Public Policy and Administration and Drew Theological Seminary, where he served simultaneously as the president of the Theological Student Association/the Black Ministers Student Caucus. In May 2015 he will be graduated from the New Brunswick Theological Seminary with an earned doctorate in ministry focused on Mass Incarceration, Public Policy and Transformative Justice. Rev. Edwards is an accomplished musician and composer and serves on several regional and national boards.

Edwards also gave a talk on the Monroe Campus on January 22.

The talks were sponsored by the College Life Committee and the NCC Alumni Association.