The Power of Art: Climbing PoeTree 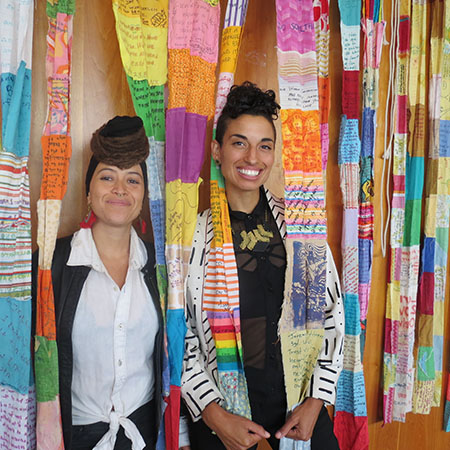 Strips of brightly colorful fabric caught the attention of attendees at a performance of the Brooklyn-based spoken word hip-hop duo Climbing PoeTree, the keynote speakers at Northampton Community College’s (NCC) tenth annual Peace and Justice Conference on October 1.  Hand-written on the cloths were “my dream: to one day be able to lead a nation that sees beyond color, gender, race,” and “let go of all your anger and blame.  Let your dreams prevail.”  STITCHED (Stories, Testimonies, Intentions, Truth, Confessions, Healing, Expressions, and Dreams) are personal stories gathered around the world by the duo. 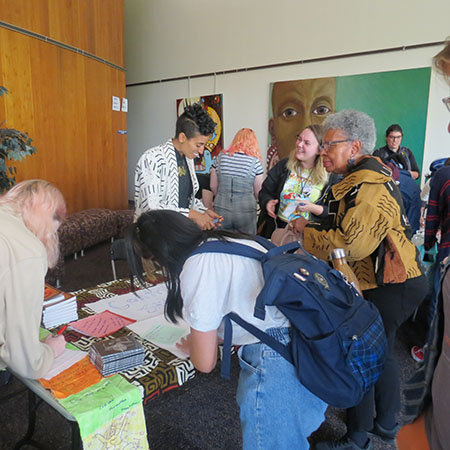 Alixa Garcia and Naima Penniman, were each already poets and social justice activists when they met and created Climbing PoeTree in 2002.  Since then, they have made 30 national and international tours, taking their work from South Africa to Cuba, the UK to Mexico, and throughout the U.S. including 11,000 miles toured on a bus converted to run on recycled vegetable oil.  Through dynamic verse and interactive activities, they “take their audiences through journeys at the intersection of their cultures and imaginations to fortify social justice.”

Starting with the toxic effects of Roundup on farmlands in Garcia’s native country of Colombia, the two revealed the deaths, illnesses and disabilities of children and adults resulting from sprays with the weed killer.  Meant to destroy poppy plants as part of the War on Drugs, the chemical mostly killed food and flower crops, displacing people and sickening with cancer the ones who stayed. Garcia and Penniman consider these actions, mostly under the Clinton Administration, as a combination of government violation and environmental destruction.  [Plan Colombia was dropped in 2010.]

From the beginning, Climbing PoeTree has focused on mass incarceration of people of color as punishment for nonviolent crimes. “Nonviolent drug offenders fill the jails,” Penniman said.  Moreover, the prison population has swollen with the rise of privately, corporately owned jails.  Numerous among those incarcerated include women, many of them mothers.  A poem the duo performed at the conference, decried mothers who have lost children to both weed-killer and incarceration.  The real criminals, the duo wrote, are colonizers who have let people die for their own profit.  They discussed a man they and others believe to be innocent who has spent 22 years on death row.  “Who’s on death row, and who’s in office?” one of their poems asked.

Another project, Hurricane Season, gives voice to the poor, elderly, very young, and sick left behind during and after Hurricane Katrina.  Garcia and Penniman see the storm as an “unnatural disaster” rather than a “natural” one because the most vulnerable were left to fend for themselves.  The last to be evacuated, incarcerated women, recalled on tape their anguished panic as water climbed the walls of their cells.  “You are being left here to die,” some wardens told them.

Health is also a concern for the duo.  Noting that cardiovascular disease, stroke and diabetes are the main causes of death for people of color, the duo discussed Soul Fire Farm, where youths of color, particularly those affected by the justice system, grow fresh, nutritious foods unavailable to them in their New York City neighborhoods.  The seven neighborhoods that account for most of the city prison population also contain the most people who are food-insecure, Penniman said.

Interactive exercises brought the audience closer to experiences. The poets invited listeners to close their eyes and hear the recorded voices of incarcerated women.  Where in their bodies did the hearers feel these cries?  In a pair-share, audience members told one another about forgiveness they received that they never thought possible.  “This is the power to re-humanize,” the duo said.  “Every stranger is a person you don’t know. When you share an experience, compassion will kick in.”

Garcia and Penniman like to emphasize solutions to society’s many problems.  They pointed their listeners to Solutions Spotlight, an online collection of sources addressing a great variety of social and environmental problems.   “If you have eyes that can see and hands that can be lifted, what will you do?” the duo challenged their audience.

Other Peace Conference events included a musical performance and workshops. 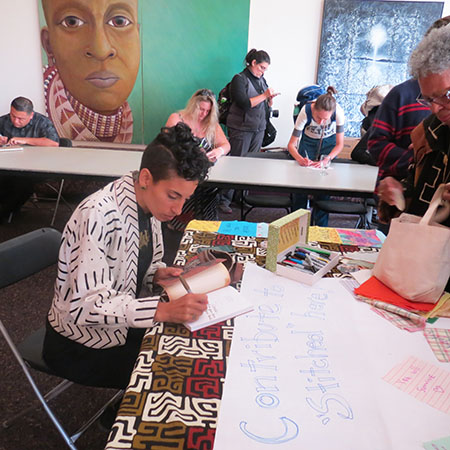