En Camino (On The Road) to Northampton 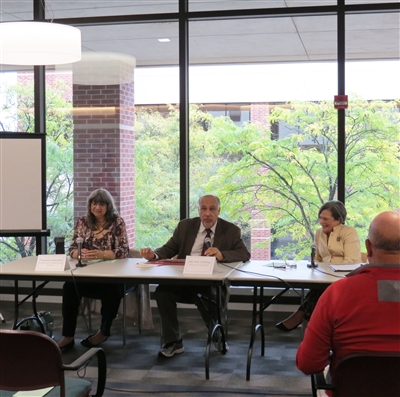 On October 12, the En Camino a Los 50 (On the Road to Northampton Celebrating the college's 50th anniversary) three NCC faculty and staff members discussed their experiences as Hispanic Americans coming to the college. Each of their journeys proved to be very different.

Virginia Gonzalez, retired professor of psychology and counseling, talked about how she first was introduced to the idea of a Hispanic Caucus when she was selected to attend the Hispanic Leadership Conference. She later brought the principals of inclusion and support to the Hispanic Caucus she started at NCC. Gonzalez wanted the group to include cultural programming, education for the college community and student support. She also wanted to foster support for Hispanic staff and faculty in the NCC family, which she felt members got just from being a part of the caucus. In the first year the group came together, they met the goal of advocating for the students by presenting a bi-lingual orientation to the college. Gonzalez looks on proudly as the caucus continues to make an impact at the college today.

After emmigrating from Puerto Rico, Teresa Donate, professor of counseling, had obstacles to overcome in coming to America. At the college, from the music played in the offices to the way people greeted each other in the hallways, Donate saw many cultural differences. Outside of the office, she faced prejudice, in particular when she tried to find housing. Because of feeling left out, and seeing a difficulty in assimilating, she decided to dedicate time over the next 25 years to creating an environment that nurtured individual diversity. She said, "You should always treat yourself with love and compassion. You should be true to your values. And, we all have a duty to educate others on our cultures in a fair way."

Jim Von Schilling, professor of English, had a different journey since he wasn't raised with a strong sense of his culture. His mother's parents were Spanish immigrants, but because of the struggles she witnessed and went through growing up, his mother completely submerged herself in American culture. This left Von Schilling with a longing to connect to his Hispanic culture. In his mid-twenties, he joined a Latin band, which was partially founded by immigrants. To them, he was a citizen and not considered truly Hispanic. But, when he came to the college, he found that he could identify as Hispanic and joining the caucus helped bring that to the surface for him.

The panelists agreed that coming to NCC helped them to feel accepted and spread cultural awareness.