Victaulic CEO Speaks about "The Future of Manufacturing" 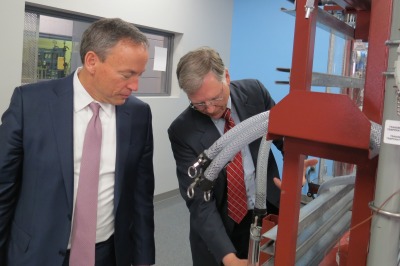 John F. Malloy, Jr., began his lecture as Executive in Residence at Northampton Community College by repeating what he had told students and faculty earlier in the day at breakfast. "In academia, there's a lot of snobbery. My best students at the community college could compete with the best students at any university. If you're the best in your class, you can be the best anywhere."

Malloy knows whereof he speaks. He taught for three years at Onondaga Community College in Syracuse, NY, while working on his Ph.D. in economics at Syracuse University, where he was a National Science Foundation Fellow. He also received a B.A. in Economics with honors from Boston College and taught briefly at Hamilton College after completing his doctorate.

But it was Malloy's 12-year role as chairman and CEO of Victaulic, the world's largest manufacturer of mechanical joints for piping systems, and previous position with United Technologies, mostly with UTC's Carrier Corporation subsidiary, that brought him to NCC on February 18 to speak about "The Future of Manufacturing."

Headquartered in Easton, PA, Victaulic employees 3,600 associates around the globe, in Engineering Centers in Forks, Pennsylvania and Dalian, China; manufacturing facilities in the U.S., Mexico, Canada, Poland and China; and through a 600-person company-employed sales force around the world.

"There's an argument that we don't make anything in America," Malloy told a capacity crowd in the David A. Reed Community Room. "I'm going to show you that's not true."

Using charts and graphs, Malloy demonstrated that there has actually been an increase in worker production. "There's been a 50 percent increase in manufacturing output -- almost twice as much as 25 years ago. The U.S. is still the largest manufacturer in the world. So why are people saying we don't make anything here anymore? Well, we're producing more, but we're using fewer people to do it."

Malloy credits this to the Lean Production revolution of the mid-1980s, started by the Japanese.

"I saw this happen," he attests. "Waste was eliminated -- waste of materials, energy, and workers' productive time -- based on these principles. Workers became more productive."

Victaulic's lean transformation began about 10 years ago, when Malloy says the company's cycle time -- the time between an order being placed to shipping it out to the customer -- went from 30 days to 3 days. 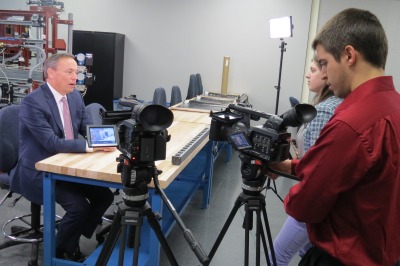 He believes that, while most organizations can get more lean, "we're on the decline of that curve." The next trend to significantly impact manufacturing lies in technology. "Automation will drive productivity in the future -- automation of manufacturing and data collection."

Malloy cited examples of this in the farming and construction industries, where fewer people are needed to complete jobs. Showing the audience an integrated model of a job Victaulic had done for the PPL Center in Allentown, he said, "We're not waiting until pieces are shipped to the job to have an engineer figure out how to put them in place. We can look on a 3D model. Integrated modeling, and the development of lasers used in construction tell us where to hang pipes."

For manufacturing, Malloy said 3D modeling and printing is going to have a huge impact. "In the last 5 years, product design simulation has taken off. More and more of our work is done online, not by making actual physical models, revising them, and making them again.  With manufacturing simulation, we can design on the computer and make adjustments before making the final product."

Robotics will also play a greater role in manufacturing, Malloy believes. Victaulic currently uses robotics to put on sprinkler heads, a job that was once done manually.

All of these factors will have implications for employment, Malloy contends. "When people talk about bringing manufacturing back to the United States, and they mean jobs for people working on a production line - I don't think that's going to happen. The future will be fewer jobs, but more output. Current skill sets will be challenged."

So what does Malloy say to students who are preparing for careers in manufacturing? It is the advice of someone who has seen what works in academics and in business: "Intellectual curiosity is the driver of success. Work hard. And don't be intimidated to articulate your ideas."

After his lecture, Malloy concluded his day as Executive in Resident with lunch with students and faculty, and a tour of NCC's newly redesigned Hartzell Hall Technology Center.

Begun in 1985, NCC's Executive in Residence program is funded by Jack and Cecile Shaffer in memory of their son Hal Shaffer. The program allows students to spend time with the area's most successful business leaders.