Following in the Footsteps of Heroes

"It will take a long time, but I will get there." 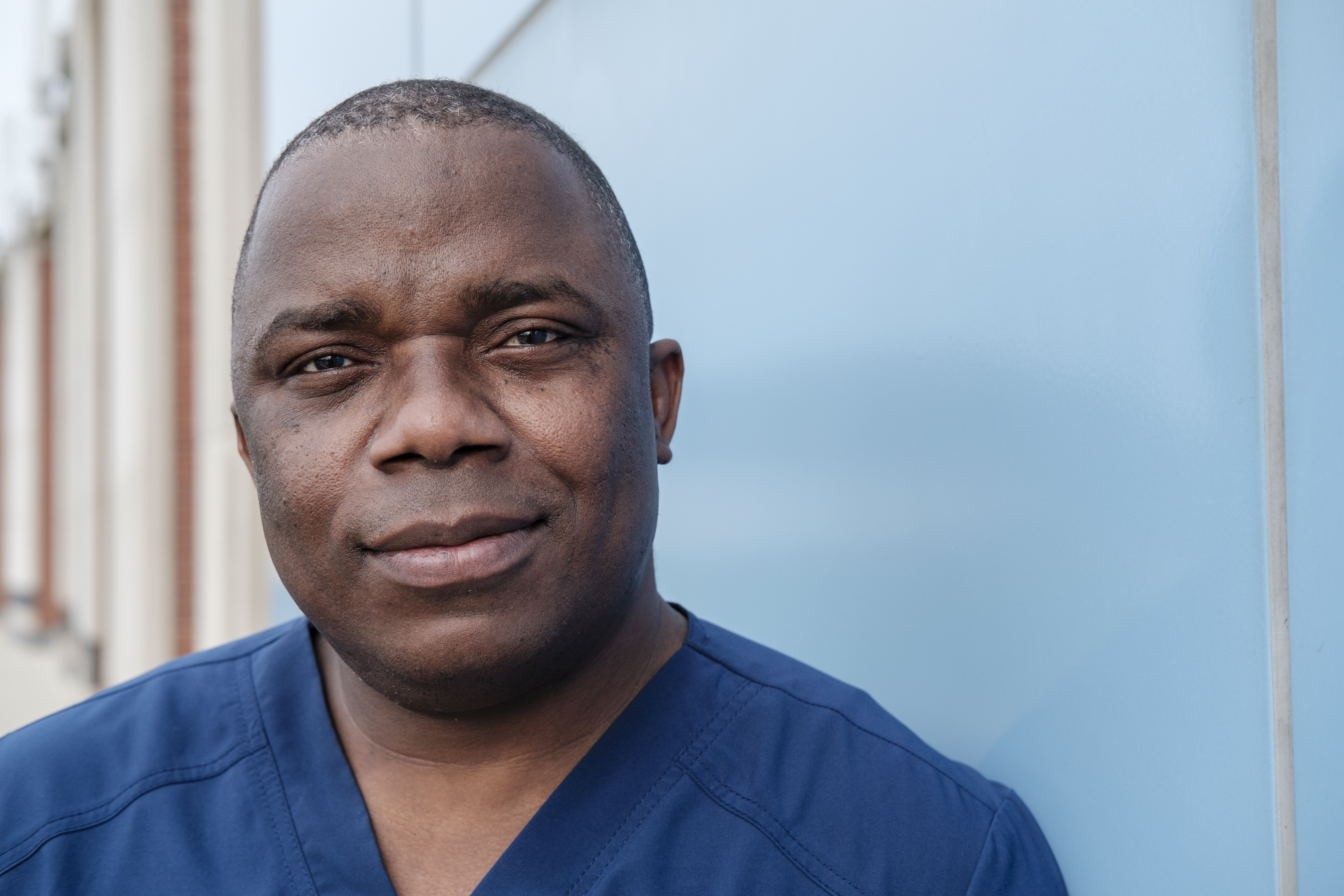 Growing up during Liberia’s first civil war as a member of an ethic minority meant that Roosevelt Totaye called a refugee camp home.

The camps in Ivory Coast and Ghana were cruel places to live; illness and violence were commonplace. Tents and, later, makeshift shacks provided the only shelter.

Totaye vividly remembers how the camps would change when American Red Cross or International Rescue Committee nurses arrived to administer immunizations. Mothers were smiling with relief, filled with the hope that their children could grow up healthy, he said.

“I grew up knowing nurses to be my heroes,” Totaye, 36, of Allentown, said. “One day, I want to be like them. I want to help people.” Totaye got to become one of those people, a nurse. He graduated in January from NCC and received his nursing degree.

But the moment was never guaranteed. It meant huge sacrifice. Years spent away from his wife, daughter, who is now 14, and family. Going almost 5,000 miles from home to reinvent himself. Juggling working full time with going to school full time while continuing to provide for his extended family in Africa. And there’s been almost insurmountable grief.

Shortly after he was accepted to the nursing program, he and wife lost their six-month old daughter, Abigail, who was born with an atrial ventricle heart defect and spent her life in the hospital.

There’s also been joy. He became a U.S. citizen, a homeowner and a foster dad (taking in 40 kids and counting). His older daughter and family joined them from Africa.

Totaye celebrated his graduation with his wife, Oretha; his daughter, Rosemary; his three foster children; his mother; and his mother-in-law all by his side. But he says he’s not done with school. He hopes to one day become a physician or a physician assistant.

“I would love to apply to the United Nations and go to a disaster area and help people like I was helped,” Totaye said. “I know what they are feeling right now and they can see myself on the other side right now.”

He is working as a nurse at Lehigh Valley Hospital-Muhlenberg and he’s already started classes for his bachelor of science degree at East Stroudsburg University. 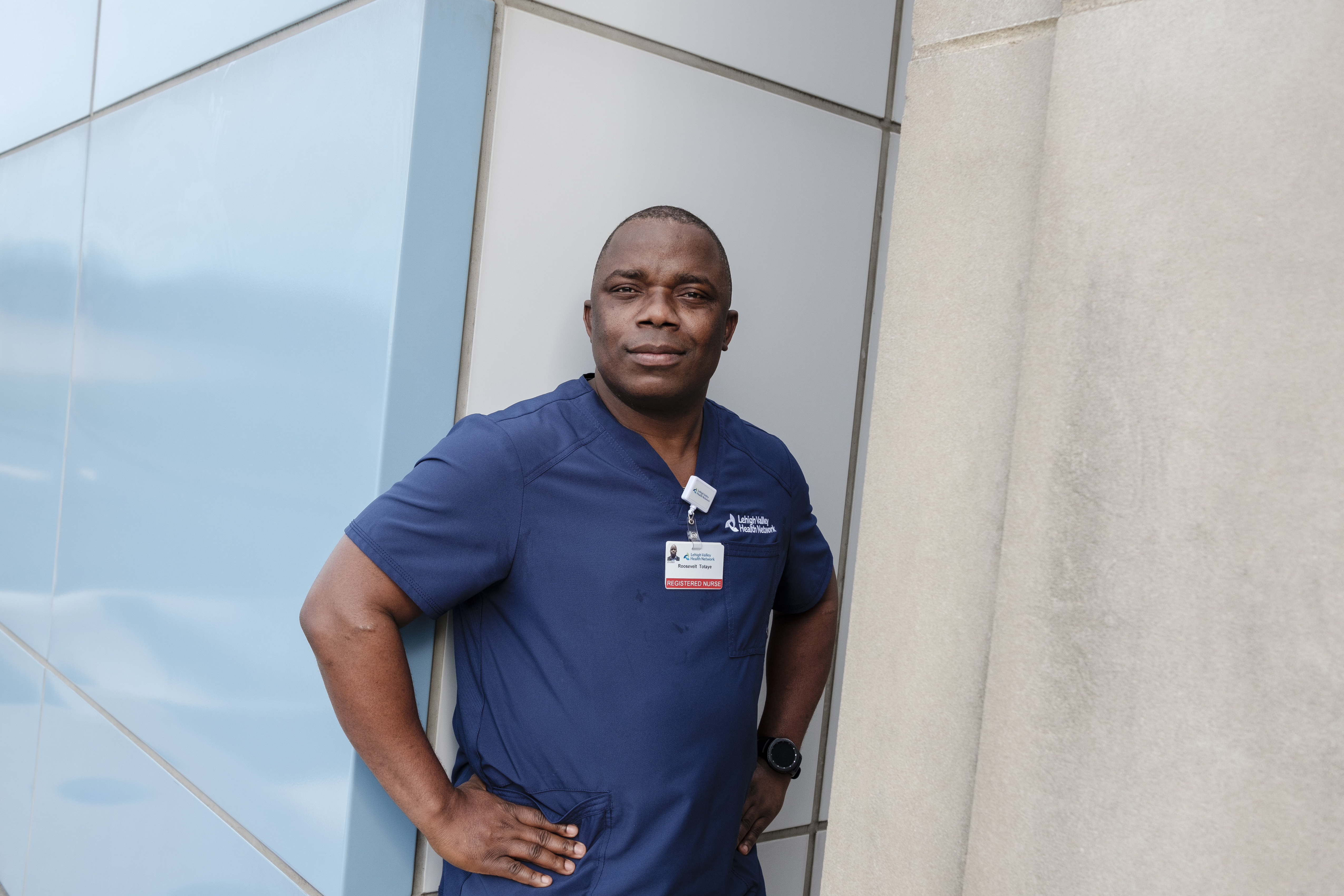 “It will take a long time but I will get there. Waiting to be a physician is not a bad time to wait,” he said. “It is way better than a lot of the other waiting in my life.”

And boy has there been waiting.

In 1989, when Totaye was 8 years old, rebel forces invaded his native Nimba County — the Liberian equivalent of an American state — attacking civilians and burning villages to the ground. Liberia has five ethnic tribes, and the rebel leader used the history of conflict among these tribes to his advantage, Totaye explained.

Each county has its own traditional culture and dialect while every tribe also has its own way of life and language, he said. Totaye’s family is part of the Krahm tribe, which has its own county, but resided in Nimba. Once the war came to their county, the majority Gio tribe thought the subset of Krahm people should return to their home county, but the Krahms there rejected them.

“This group is still marginalized today and that is the group I belong to,” Totaye said. “They said, ‘You are from the area of our enemies.’”

When the rebels attacked in the night, his family fled into the bush, hiding for about a week and making their way across the river to Ivory Coast.

“You are hearing them shooting and you don’t know which way to go,” he said.

Because attacks occurred in the dead of the night, people often jumped out the first available window, fleeing in chaos, separated from family and children.

“When fight or flight kicks in, you can do anything,” he said.

So, then there was waiting in the camps, hoping and praying the missing were just still making the treacherous journey.

Eventually, as the war across the border worsened and spilled across, life in the Ivory Coast camp became too dangerous for a teenage boy, so Totaye’s mother sent him alone to another camp in Ghana. At 15, he made his way across the country and into Ghana alone.

“A refugee is not really free. The only advantage of being a refugee is you aren’t running every day from a gun,” Totaye said. “I really, really, really appreciate the time I spent in Ivory Coast and Ghana because they gave us shelter. But we saw what our parents experienced.”

He repaired shoes and made bricks out of soil to get by in the Buduburam Refugee Camp, where he encountered many people from his village. People are still living in the camp today.

“I want to open the eyes of people to realize you don’t know what freedom is until you lose it,” Totaye said.

He met his wife when he was 18; they began dating two years later. The couple welcomed their daughter Rosemary in 2004. Then in 2006, Oretha immigrated to the United States without the family. She spent four years working as a certified nursing assistant, saving and sending money back to Ghana. During that time, Oretha discovered NCC, where she learned  English and earned her certificate, Totaye said.

She returned to Ghana in 2010 and the couple wed on April 13 of that year. Then, Totaye returned to Liberia to begin the process of obtaining an immigrant visa. Finally, in August of 2012 he was able to join Oretha in Allentown. They were overjoyed to finally be in the same place together.

He began working at the Lutron Electronics factory in Fogelsville via a staffing agency and enrolled at NCC at the urging of his wife. He started taking general ed classes with the aim of earning a seat in the college’s competitive nursing program.

“It was a whole new world but I was able to conquer it and get used to it,” Totaye said of the U.S. education system.

The couple moved to a bigger apartment in anticipation of Abigail’s birth. Sadly, she never came home, instead going to St. Christopher’s Hospital.

The months after her birth were spent working 12-hour shifts, squeezing in classes and driving to the hospital to bring Abigail breastmilk and sit by her side. Totaye barely slept in those months, but that was nothing compared to the pain of losing his child.

“At that point, I thought I was strong. I’m not,” Totaye said. “When Abigail passed, I saw how weak I was and (my wife) became strong.”

He tried to plow ahead with the nursing program in the fall of 2015, telling no one about the loss of his daughter. But he floundered. His first semester grades stood in sharp contrast to his earlier grades and his professor brought him in for a meeting.

When he shared his story, NCC staff encouraged him to withdraw from the program and connected him with counseling services. He balked, afraid to give up his seat in the competitive program. They promised to hold his place.

“They told me, use this spring and summer to clear your mind, get whatever help you can and by the fall of 2016 you can come back,” Totaye said.

He took the time to grieve and support his wife and re-enrolled in the program the following year. Until recently, he was working as a caregiver in a group home, so his work could bring him closer to his future career.

Once in the program, Totaye shined in class. His nursing professor Marie Everhart knew nothing about his background when he came into her class, but he sparked her curiosity. He was a sponge for learning and so very thankful for the opportunity, she said. 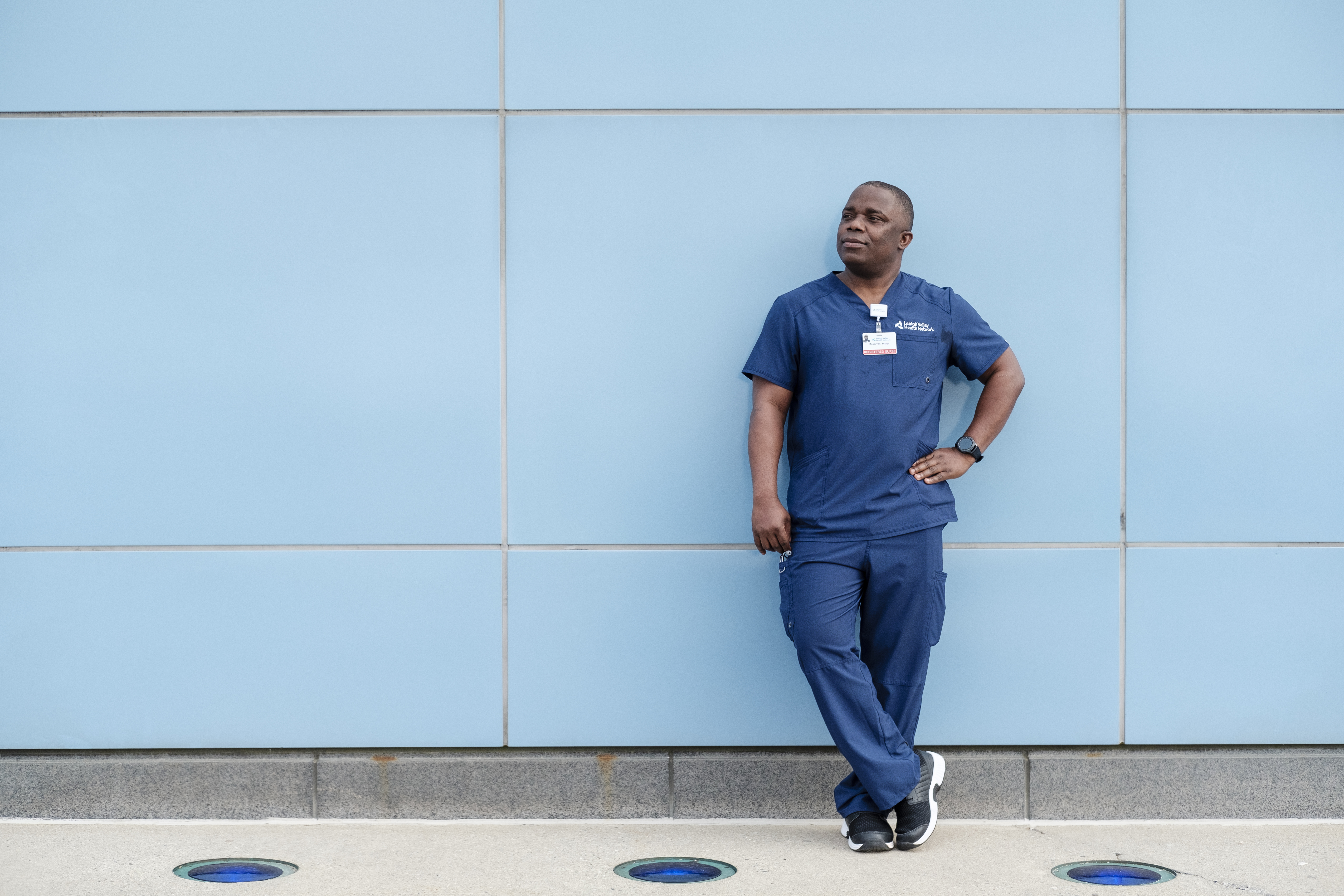 “He was very, very attentive in class and very respectful. He wouldn’t speak a lot until he had something really relevant to say,” Everhart said. “(He intrigued me) not just in the classroom, but in the clinical area where we care for patients. There were so many stories, every patient he took care of was just so glowing with him.”

Everhart was shocked to learn at the end of the program that he’d encountered racism with several of his patients.

“I wish I could’ve helped him more through it, but he didn’t need my help,” she said. “I think with all the adversity he’s experienced in life, it just made him a stronger person.”

Totaye recalled one nursing home patient who refused to be cared for by a black man. He did not argue with her or raise the issue. He asked a classmate to trade patients.

“I am going to take care of people like her every single day,” he said.

But one day that patient needed help and he was the only one available. She decided she wanted his assistance and later apologized for her ignorance, he said. They became close and he cared for her often during his clinical rotation. Reacting in anger would’ve only reinforced her negative stereotypes about black people, he said.

“My not reacting was so heavy she had to come and tell me, I’m sorry,” Totaye said.

It was remarkable that some of the patients who initially took issue with his color became his loudest fans, Everhart said.

“Where someone else might have taken offense, he just took the bigger road and he always did,” she said. “He was a great advocate for his patients.”

Everhart is grateful to have had Totaye in her classroom. He takes a pure joy in learning and is so grateful for his freedom and opportunity.

“He just touched my heart, watching him, knowing what he came from and what he’s developed himself into and always taking the high road, never being a victim, saying, ‘Why did this happen to me?’” Everhart said. “A lot of us can learn from that.”