Food in the Public Square

Activists and Consumers Chew on Results of Recent Food Study

While our dependence on food is universal, discussions of food activism can get complicated.  This was very much in evidence on October 29 at Northampton Community 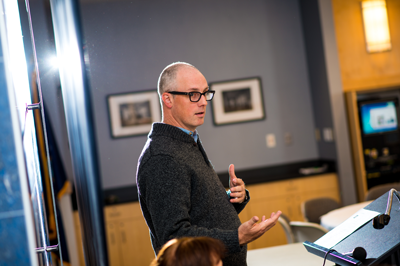 College's (NCC's) Fowler Family Southside Center at a "Community Conversation" that concluded "Food in the Public Square," a nine-month study of the Lehigh Valley food supply.

The goal of the day was to engage the community in a humanities-based conversation about the local food supply and food culture. The conversation was as rich in flavor as the diversity of people in the Lehigh Valley, reflecting differences and similarities in culture, language, lifestyle, and economic status.

We all eat, but some do not have time to cook, are short on time to garden, and lack the funds to buy fresh food. Those of us who can do all of the above can count our blessings. No matter our resources, we can all join the conversation on food.

Kelly Allen, an NCC professor who coordinated the "Food in the Public Square" study funded by the National Endowment for the Humanities, opened the conversation by discussing the fluidity of sustainability and food justice. He emphasized that culture inevitably impacts our food choices. He then introduced "a panel of people who are doers" in the field.

Feller is the urban ecology coordinator of the West Ward Neighborhood Partnership. In 2009, she started community gardens of raised beds tucked away in former parking lots near her home in Easton's West Ward, an area she describes as culturally diverse and heavily populated.  It is considered a food desert.

The U.S. Department of Agriculture defines food deserts as, "parts of the country vapid of fresh fruit, vegetables, and other healthful whole foods, usually found in 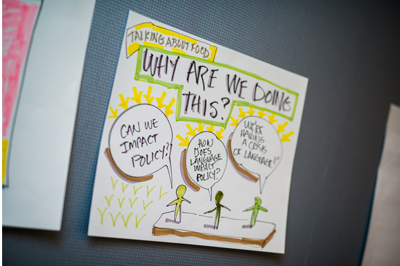 impoverished areas. This is largely due to a lack of grocery stores, farmers' markets, and healthy food providers."

While the Easton Farmers' Market seems nearby, West Ward residents feel distanced from it. Some feel socially awkward there. If they don't have cars, it's hard to walk home while carrying produce, Feller added.

To serve this need, Feller worked with Lafayette College to provide those families with fresh produce. She started vegetable stands on the streets where people enjoyed music and sharing recipes in English and Spanish. She created the volunteer-driven Easton Urban Farm. Its stand lasted for 10 weeks in 2014, partnering with donators La Farm (Lafayette College's community garden), NCC East 40 Community Garden, and Northampton County Prison's treatment center.

"It's a real labor of love to work there," Feller said.

Stephanie Dorenbosch spoke next. She is a staff attorney at Friends of Farmworkers, a nonprofit legal services organization that serves low-income farm and food processing workers in Pennsylvania. She represents many immigrant workers.

Dorenbosch presented data from The National Agricultural Workers Survey indicating that 75 percent of U.S. farmworkers are from Mexico and 53 percent are undocumented. These workers typically possess little education and low English language proficiency. They live in poverty, earning $12,000 to $15,000 a year. As a result, they rarely bring home healthy food to their families.

All immigrant farmworkers, whether documented or undocumented, experience many issues, most importantly retaliation for speaking up. Even a U.S. citizen farmworker isn't entitled to overtime pay, she said.

"[These] people are living day-to-day and on the edge," she said.

Dorenbosch spoke of the complexity of immigrant farmworkers' situation, asserting that the U.S.'s agricultural economy is based on slavery. Exemptions from the 1930s New Deal deprived poor black farm workers of their rights and continue to impact immigrant farmworkers today, she said.  Farmers are dependent on field workers to harvest their crops.  Some try to treat them fairly, but they face economic challenges in doing so.  Dorenbosch also believes the public should start asking farmers about their work conditions.   "You can solve this!" she said.

Alvaro Drake-Cortes was the final speaker. He is the project manager of The Food Trust based out of Philadelphia. The Food Trust addresses food challenges in the U.S. and policy change, oversees research, runs 21 farmers' markets in underserved communities, offers workshops in more than 15 schools, and works with small business owners.

Drake-Cortes manages the Pennsylvania Healthy Corner Store Initiative that guides grocery store owners in providing "real estate" and "marketing" for organic products as they do for junk food. Cortes's main goal is to help customers understand their options.  "We offer nutrition education to help create demand," he said.

A Q&A followed the panel discussion, starting with, "What can we do to better accomplish the goal to increase the participation of new and under-respected populations in the community discussions focused on food?"

Estefania Perdomo, a member of the public, asked why the presentations were not in Spanish. Cortes and Dorenbosch reacted by translating in Spanish to show their 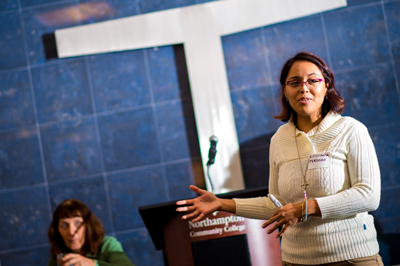 eagerness to reach out to the Spanish-speaking community.

They noted that racial diversity is an issue to consider in the food conversation. New populations regularly immigrate to this country. Regardless of race or language, many people experience a collective desire for fresh food, they pointed out.

"We have the whole world coming to us," Cortes said.  "We have...very specific challenges that make the environment very rich."

"I grew up on canned food, the more dented, the better," she said.

Poems from her nature poetry workshop were displayed in the lobby. The poems explored themes of farming, flavor, cooking, texture, unity, and generational love.

"Our generation is already going on the wrong path," Seixas said. "We should focus on the right path."

Sodexo provided lunch for the participants in the community conversation with ingredients supplied by NCC's Farm Market vendors: Jett's Produce and The Flour Shop.

After lunch, Saide Saddiq performed drumming and spoken word. Saddiq is the founder of Arrow Up EAP (Empowering Arts Project), a startup nonprofit social impact movement dedicated to creating justice and unity among Lehigh Valley youth. The nonprofit was invited to pilot an after school program at Liberty High School in Bethlehem.

Change can happen if we understand a collective identity, Saddiq said.

As Saddiq chanted "Brand New Day," his energizing rhythms unified people in the room from different walks of life. He enthusiastically welcomed attendees to play along using the percussion instruments at their tables.

Saddiq mentioned that he wrote the chant when feeling depressed. He reached rock bottom when he was homeless and continued to struggle on his entrepreneurial journey.

"You can revive yourself and see there's a bigger picture that we're all living in," he said.

His spoken word performance titled "The Future Is" embodied taking ownership of creativity and belief. He passionately encouraged people to take ownership of food activism. 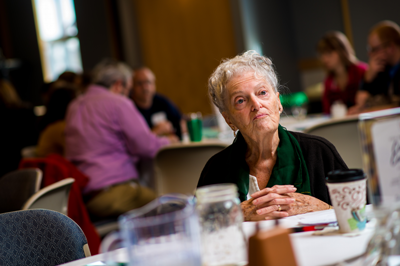 he married his late Sicilian wife; Ada Chandler who works as the chef at Safe Harbor of Easton and also hosts cooking classes at Easton's new public market; and Matt Hall, an attorney with Marshall Dennehey Warner Coleman& Goggin whose self-taught cooking skills won the competition.

The chefs answered honest questions with honest answers. When asked, "What if I can't afford those fresh peas?" a chef suggested using frozen peas, saying they are better than canned because they are preserved better and can be used a little bit at a time.

Each attendee received a gift basket of cooking tools. Prizes of larger kitchen gadgets were raffled off.

The chefs' entrees included a salad of red kidney beans, yellow squash, zucchini, edamame, cumin, and lemon; one pan-chicken with tomatoes, onions, and garlic as well as rice with the "good stuff" on the bottom of pan.

By the end of the day, participants gained a greater understanding of food culture. They eagerly exchanged contact information, sharing their ideas to further the actions we can take to provide fresh food for many people in the Lehigh Valley.