Getting on the Right Wave Length 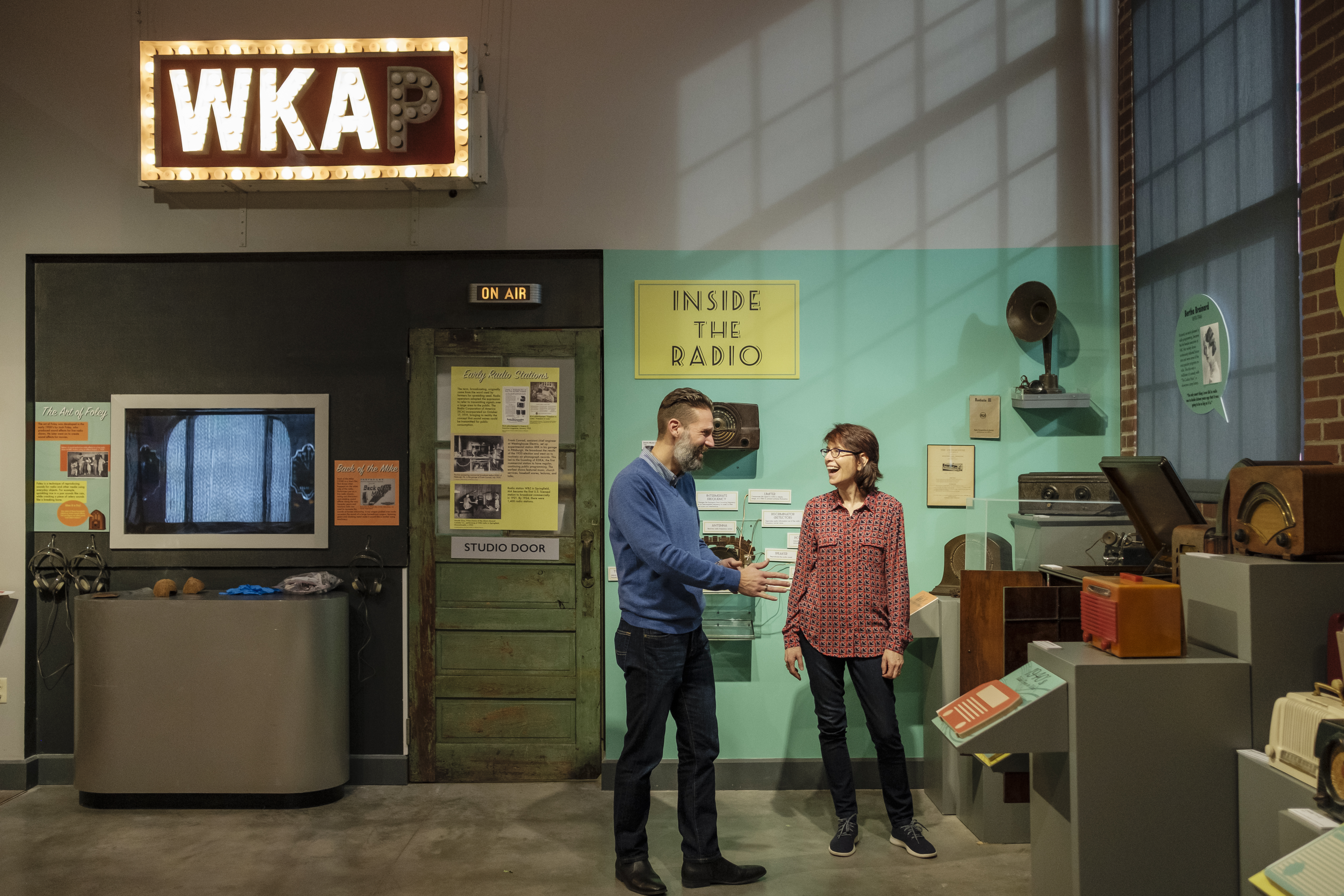 For NCC Professor Donna Acerra, being part of the “Don’t Touch That Dial: 100 Years of Radio” exhibit at Bethlehem’s National Museum of Industrial History was music to her ears.

The project was a chance for her to reminisce fondly about her late father. And when Acerra says he “was a ham through and through,” she’s not kidding.

Don Shipman was so devoted to communicating by ham radio that after he and wife Barrie retired to Myrtle Beach, South Carolina, he would spend long drives back home with one hand on the wheel and the other operating a “leg key,” talking for hours via Morse code.

“I would not have put up with that,” Acerra notes with amusement. But she understood her father’s passion.

Her earliest memories of radio came in his basement “ham shack,” staring at his big world map and listening to him talking to people all over the world — always via Morse code, a passion he discovered at age 14 and developed monitoring Russian radio signals in the Army and through decades as a dedicated hobbyist.

Acerra never followed in his footsteps as a ham operator. But her communications classes at NCC, including History of Broadcasting and Radio Workshop, have reflected her radio roots.

Her father’s passion and the collection of radio equipment she inherited helped spur the latest exhibit at Bethlehem National Museum of Industrial History — and the NCC connections don’t end with her.

Andria Zaia, curator of collections at the museum and an NCC adjunct professor of cultural anthropology, learned about Acerra’s collection and connected with her to begin discussing what became “Don’t Touch That Dial: 100 Years of Radio,” which opened in February and will continue through Nov. 3.

It includes Don Shipman’s operational ham shack, where licensed ham operators are invited to sit down and operate — and look at the same world map that so fascinated his little daughter. 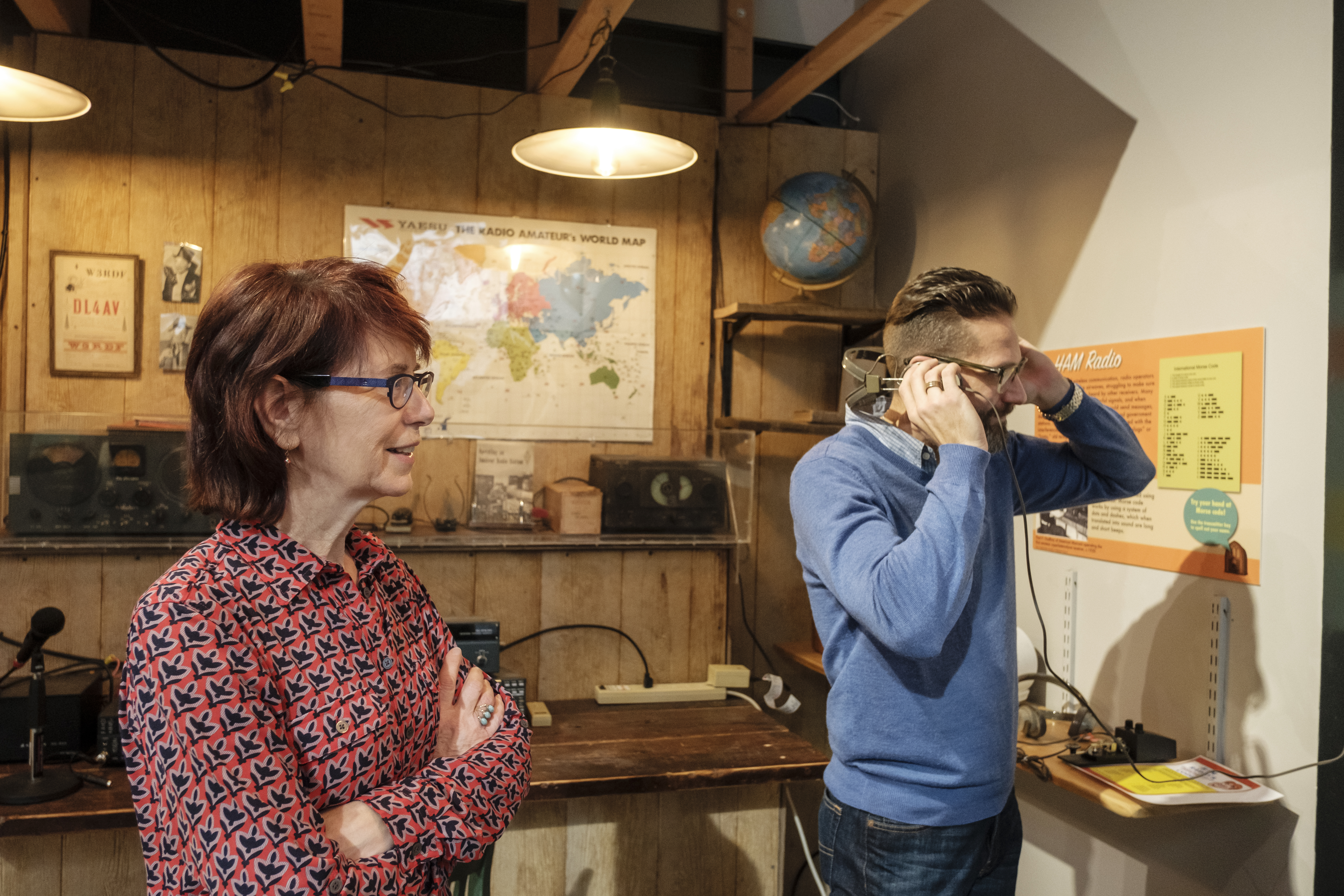 Their search for more equipment to display led Zaia and Acerra to a radio swap meet where they stumbled across NCC alumnus Jarret Brown, who graduated in 2001 as a radio/TV major. His first class in his major was Acerra’s Radio Workshop.

Brown went on to spend 15 years as a local radio personality and now works at Lehigh University as a media production specialist and teaches Introduction to Radio as an adjunct at DeSales University.

His collection of radio equipment and memorabilia includes a giant lit WKAP Radio sign — it takes 105 bulbs — and early crystal radios from the former Bethlehem Radio Corp. These became part of the exhibit.

“It’s just funny that after all these years, our paths cross,” Acerra said. “I’m thrilled to see him still working in radio.”

Brown said, “I never stop singing the praises of that program and the community college in general. It turned out to be the catalyst for my career.”

The coincidences don’t end there. On a flight from Allentown to Chicago, Acerra noticed that a fellow passenger’s laptop was open to a page full of antique radios. She ended up switching seats with the passenger sitting next to Dr. Daniel Schwartzman, an Easton OB-GYN and avid radio collector and licensed operator. “We talked all the way from Allentown to Chicago,” she says.

Schwartzman’s collection became another big component of the exhibit, which features almost 100 radios.

“Don’t Touch That Dial!” includes displays on radio sound effects, the science that harnesses electromagnetic waves, and a breakdown of the radio’s internal components. There are tributes to broadcast icons like Orson Welles, Gracie Allen, Alan Freed and Casey Kasem. 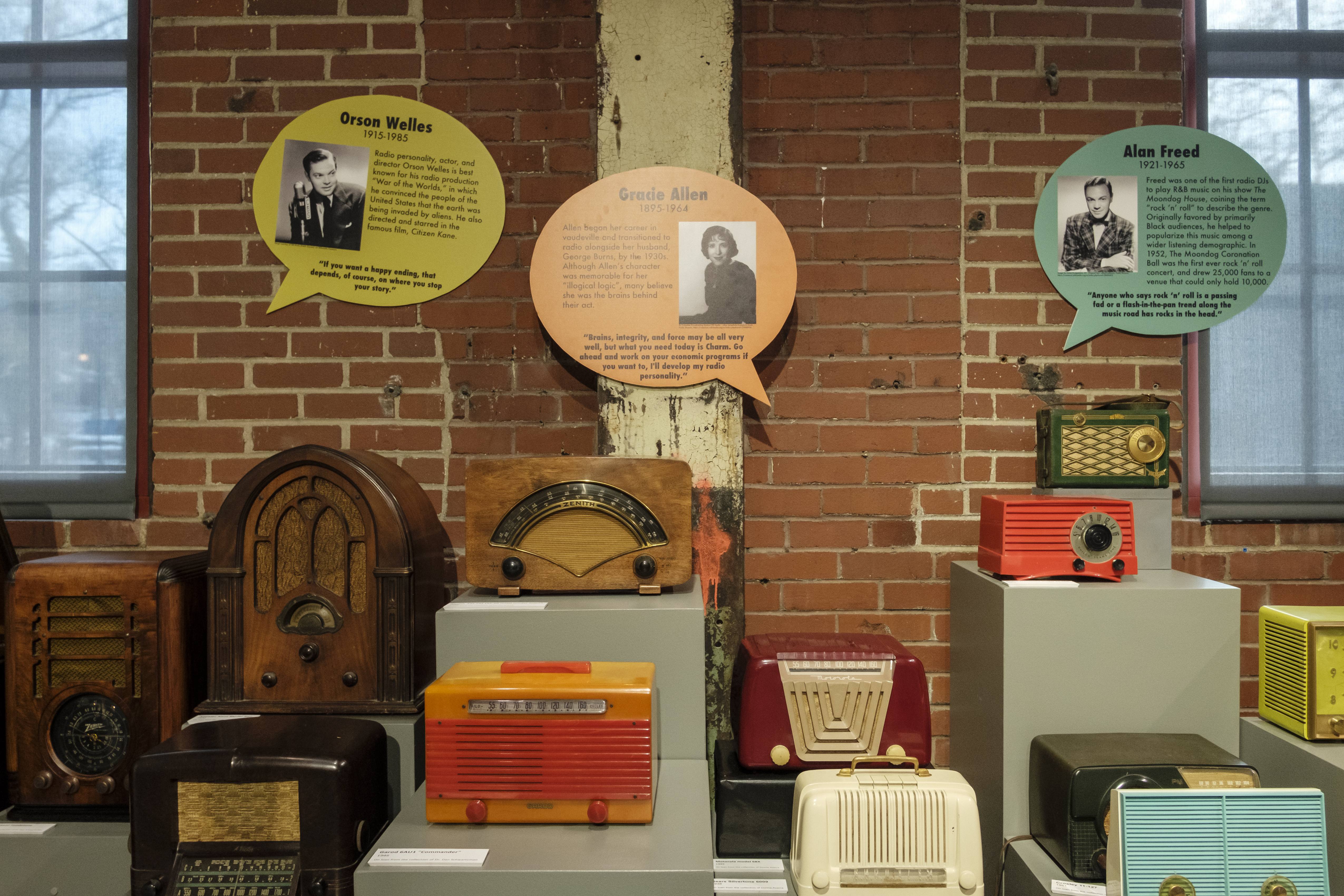 One wall takes you from the giant consoles of early radio, to tiny transistor radios, to boom boxes and all kinds of novelty radios. Zaia points out that radio evolved from a solitary activity for early operators, to family gatherings every evening for broadcasts, and eventually back to solitary listening under bed covers and through earbuds.

Visitors can even lounge in a ’50s-style living room and listen to “The War of the Worlds” and other vintage radio broadcasts, channeled into an old console through a computer program prepared by NCC student Eric Gorski.

Acerra’s involvement didn’t end with her father’s collection. Her outreach has included helping pupils at the Bethlehem Area School District’s William Penn Elementary School to act out their own live radio broadcast, complete with third grade actors and sound effects engineers, working from a script written by Acerra’s History of Broadcasting students.

So even though she says her father was disappointed she never obtained her own operating license, she adds, “He was OK with my just valuing his hobby.”

“Don’t Touch That Dial” is the perfect tribute to him and all the other men and women who have been entranced by the magic of radio.