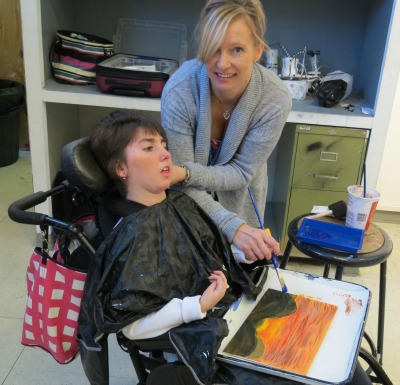 Easels in front of them, a classroom of Northampton Community College students mixed paints, put color to canvas, and talked with Professor Bruce Wall, as he circulated among them.  Mikayla Resh and her nurse, Carolyn Martin, RN, worked alongside the young men and women, finishing a sweeping landscape of sun, sky and hills.

Doing activities with her peers has been Resh's parents' goal since their daughter was born twenty years ago with severe permanent brain damage, resulting in cerebral palsy, spastic quadriplegia, profound intellectual disabilities, and legal blindness.  Mikayla neither walks, talks, nor eats without a feeding tube.

Yet, she is able, with assistance, to engage in art beside people her age.

From the beginning, Resh's parents made the decision to give her the fullest life possible.  To this end, they enrolled her in the Nazareth Area School District, starting in first grade.  As a special education student, she accompanied her class right through high school graduation. Her third-grade classmates wrote a book about her: Our Friend Mikayla.  Resh took two art classes at Nazareth High School, including ceramics, which gave her the sensory opportunity to manipulate clay.

Knowing that services from the Nazareth School District would end when Resh turned 21, her family thought ahead.  They wanted her to continue being active and having another kind of sensory experience different than one with clay.  So, they enrolled her in NCC Professor Bruce Wall's Painting I class.

Hand over hand, Martin guides Resh, as she moves the paint brush over the canvas.  A piece of foam with a hole in the middle, makes the brush easier for Resh to grasp.  Resh also sometimes places her hands directly into the acrylic paint as in finger painting.  Various textures created by gel-like and sand-like additives add to Mikayla's tactile experience.

"The painting class is a very positive experience for her," Resh's mother, Kimberly, says.  She recalls how her daughter received an exuberant greeting from a former classmate at Nazareth High School.  The class chose one of her paintings as one of their four favorites.  "The students' selection showed that Mikayla has given as well as received," Kimberly says. "She has received social interaction and sensory input, but she has also taught others kindness, understanding and celebrating others.  People appreciate meeting Mikayla."

Members of the painting class are receptive, helpful, and interested in Resh and her painting, Martin says.  "They come over to her to say hello and see what she is doing.  It is a basic need to be accepted, to be part of a community."

Inspired by Mikayla, Kimberly founded Mikayla's Voice, an organization with the conviction that "diversity builds understanding, compassion and acceptance, making us all better human beings."  (From the Mikayla's Voice website.)  The non-profit organization participates in numerous community events.  Mother and daughter travel all over Pennsylvania, introducing children and their teachers to the idea of including people with disabilities in all areas of life.

Mikayla is much appreciated by her family, including her sister, Lauren, who says, "Mikayla inspires me to live life to the fullest."

Kimberly says, "While she has never spoken, Mikalya's voice is now heard."

Learn more about Mikayla's Voice and inclusion materials at http://www.mikaylasvoice.org.