Lorena Flores is a translator for The Morning Call 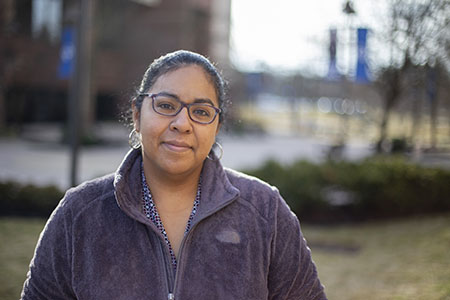 “I love helping people,” says Lorena Flores.  An NCC journalism alumna (2018), Flores is now taking prerequisite courses to apply for the College’s nursing program.  At the same time, she has found the ideal, vital outlet for her humane personality; thoroughly bilingual, she does Spanish-English translations at the DaVita dialysis center, where she is a full-time dialysis technician.  Her bilingualism has eased communication between staff and patients for the past sixteen years.

As a journalism student, she felt excited when Professor Rob Hays told her about another translating opportunity.  Terry Rang, retired editor-in-chief of the Morning Call, had created a freelance translator position to reach out to the Spanish-speaking community, with the purpose of including their thoughts and ideas in the Morning Call's "Vulnerable in the Valley" series.  “I am very grateful to Terry for recognizing that there is a need for more inclusivity and that she included me in the process,” Flores says.

As part of this project, The Morning Call staff holds forums, in various locations, for Spanish-speaking people to voice their concerns about coverage areas.*  Recently, at a meeting at Gross Towers, apartments for people with low or fixed incomes, most of whom are Spanish-speaking, residents brought up issues of affordable housing, climbing rents, the need for better public transportation, and the impact of Allentown’s Neighborhood Improvement Zone, where higher rents are pushing some Allentown residents out of the city.

Born and raised in Chicago and of Mexican and Puerto Rican parentage, Flores grew up speaking Spanish at home and largely Spanish at her elementary school.  By middle school, more English was added to classes.  She became proficient at reading, writing and speaking in both languages.

After years in Chicago, Flores and some family members decided to move to the Lehigh Valley, where a relative already lived, in search of a quieter environment and better schools for Flores’ four children.  In fact, her oldest child, a daughter, graduated from NCC and went on to East Stroudsburg University.  Flores also has one grandchild.

Students, faculty and staff at NCC recognize Flores’s special academic and personal qualities.  In addition to her rigorous studies, a full-time job and a family, Flores is also one of those chosen for the NCC Leadership Class.

Flores’s eagerness to be helpful extends past her work in the dialysis center and her job at The Morning Call.  “I grew up in a section of Chicago called Ukrainian Village, a diverse neighborhood culturally and linguistically,” she says.  “Since people spoke a variety of languages, someone was always on hand to translate for a neighbor.  Here, in the Lehigh Valley, people come up to me and ask me ‘do you speak Spanish?’  This happens in grocery stores and businesses such as banks.  It gives me a lot of pleasure to help out.  Communication is so important.  I tell my children that all the time.”

After completion of her nursing degree, Flores plans to stay in the dialysis field as a nurse.  Her compassion and love of service will be of immense benefit to her patients.

*This article was written well before the current COVID-19 health crisis.