Students from both Monroe and Bethlehem present

For the first time, Northampton Community College (NCC) held its annual Honors Conference at the Monroe Campus.  The event took place on April 21. 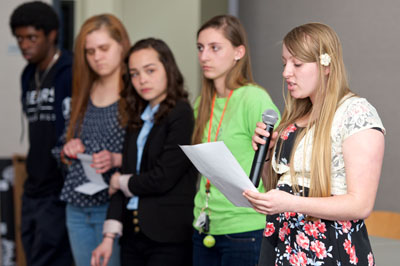 Students in the College's honors program, both at the Bethlehem and the Monroe campuses, gave oral presentations accompanied by posters.

The NCC Honors Program is designed to meet the needs of the College's most academically prepared students.  by providing an enriched educational environment in which students are challenged to reach their full intellectual potential and to better prepare themselves for the academic demands of a four-year college or university.

Each presentation was the result of extensive research.

"Perspectives on Social Justice" included talks by Nicole Cruts, Tahara Davis, Andrew
Folmsbee, Molly Pursell, and Kristen Shean. In her presentation, Cruts decried cruelty to animals in humans' pursuit of style.  She pointed out that, contrary to what people think, roosters must be killed for their feathers and that millions of cattle and furred animals are slaughtered for their skins or fur.

Pursell described the harm caused by hydraulic fracking: contaminated water, health problems, and chemicals such as formaldehyde that leach into the soil.  She discussed legal loopholes that allow this practice.

Shean talked about workforce discrimination against GLBT people and religious exemptions that permit some organizations to practice bias based in gender identity and sexual orientation.

Davis examined Islamophobia. She talked about hate speech and violent crimes against Muslims in the United States and said that terroristic acts by people who claim Islam as their religion do not truly reflect the faith.  She said that feelings engendered by these acts should not be applied to all Muslims.  She called for compassion and understanding.

Folmsbee looked at the prison system and depicted the role of economic and educational inequity as factors in making the rate of incarceration in the United States the second largest in the world.

Each presenter suggested remedies for the injustices they discussed.

Presenters for "A Midsummer's Night's Dream: A Script and Performance of the Wedding Scene,"  Allison Beerwa, Skyklar Walter, Brandy Martinez, 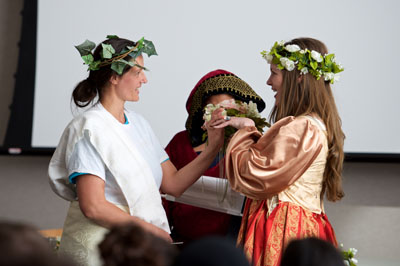 Jeremiah Williams, in "Betwixt Act I of III," read an excerpt of his poem juxtaposing good and evil, the ego and the superego.

Leanna Sjursen read her fantasy tale about three palaces, a story ending with a question for the audience and a surprise answer.

In "Writing for Family Promise,"  Quetcey Dueno, Leanna Sjursen, Sarina Tufano, Glenn Walker, and Lacey Warner described writing a fundraising letter on behalf of the organization Family Promise and what composing an appeal for an anti-poverty agency had taught them: gratitude, the persuasive writing process, awareness of homelessness in Monroe County, and the challenges of writing a letter as a group.  Their project yielded an impressive result:  it raised $7,500 and a promise by one woman to donate $10,000 to the agency over the next few years.

Brandy Martinez explored the "Battlefield of the Mind," by analyzing the duality of human nature portrayed in Shakespeare's Othello and Macbeth. She said that Shakespeare's insights about the revealed and hidden selves predated those of Sigmund Freud by 400 years.

For "Biology in Action,"  Rachel Fernbach, Carla Garis, Abby Krueger, Samantha Washington, and Stephen Berry described their service learning project of assisting children in two of the SMaRT (Science, Math and Related Technologies) Workshops held last week at the Monroe Campus.  They enjoyed seeing the children's enthusiasm about science and the participation of many girls.  The group also played a video of an experiment they did at Pocono Hall to determine how many students understand and practice recycling.

View more photos from the conference in this photo gallery.