Incivility on the Internet

The Pros and Cons of Anonymity 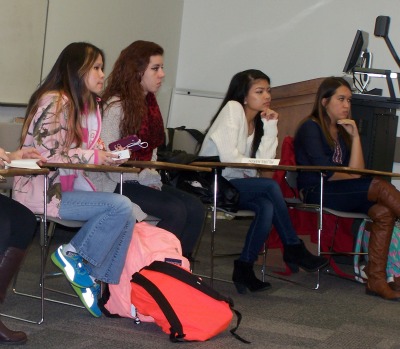 At a time when incivility, free speech and anonymous electronic communication are evoking passion around the world, honors speech communications students discussed the history and tools of anonymity and its effect on society at a symposium on December 7.

The NCC Honors Program is designed to meet the needs of its most academically prepared students. It does so by providing an enriched educational environment in which students are challenged to reach their full intellectual potential and to better prepare themselves for the academic demands of a four-year college or university.  Academically prepared students in all majors are invited to apply for the program.

The discussion was kickstarted by Plato's myth about the Ring of Gyges, which allowed the wearer to become invisible, enabling him or her to commit injustice and acts of incivility anonymously.  Two thousand years later, the internet has brought these ancient concerns to the fore once again. New computer applications such as Yik Yak are furthering the ability of people to post messages without revealing their identity.

Some of the observations participants made about anonymity and incivility included:

For more information on the NCC honors program, visit www.northampton.edu.     Add your own thoughts on anonymity on the internet below.