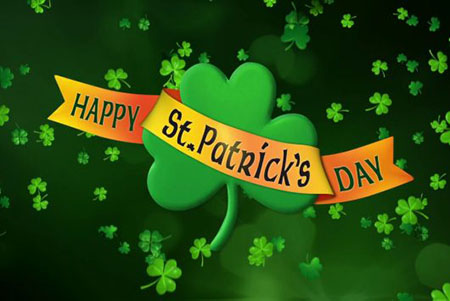 This was our family’s way of saying “Happy St. Patrick’s Day” to each other.  The day is usually an occasion for some reflections on the past.  My brother, sister and I are lucky enough to have known all our family members who immigrated from Ireland and even some still there.  They made so many sacrifices in the hope that succeeding generations would secure a better life in America. My grandmother told my then teenage dad that, as her ship left Cobh, County Cork, she could see her family’s farm where her parents still lived.  As she looked at it from the sea, she knew in her heart she would never see Ireland or them again. And she didn’t.

I like to look at St. Patrick’s Day cards at the Giant or Wegman’s. I see plenty of cartoonish leprechauns, beer glasses and freckled red-headed cherubs proclaiming platitudes about Irish luck or blessings. It’s not very Irish but it’s all great fun, and I remember that today everybody is Irish. On another level, I’m quietly proud that it’s the Irish who were chosen to represent the millions of immigrants who came here (and still come). And I recall that, with few exceptions, we are all immigrants.

When we were children, our parents took us to the St. Patrick’s Day parade in Allentown. It was mostly high school bands, decorated fire trucks and spectators waving little green flags that featured a harp and “Erin go Bragh.”  St. Patrick marched in his (green) episcopal robes, and the grand marshal was usually someone with an Irish (or sometimes a Pennsylvania Dutch) surname. In later years, I often attended the grand parade in New York City, where the Irish wolfhounds and the Fighting 69th Regiment (the descendants of the legendaryNew York Irish Brigade of Civil War fame) lead tens of thousands of marchers up Fifth Avenue in front of two million spectators.  My grandfather once told me there were very few St. Patrick’s Day parades in Ireland until American tourists started asking for them.

The Irish people enjoy a pint or a dram, and the pub is the center of town life. However, alcoholism is an issue there, and the temperance movement is strong.  Ireland has the highest percentage of people in Europe who don’t drink at all.

First time visitors to Ireland are often surprised that they find a modern European nation with a vibrant culture and thriving economy. The thatched roofs, clay pipes and strains of “Galway Bay” are mostly sentimental memories passed down to the 40 million Americans who claim some Irish heritage.

This St. Patrick’s Day I’ll again enjoy the memories, music, stories and the friendships.  In fact, I like everything about it, except the food.  I’ll leave the mutton stew and the corned beef and cabbage to those who are Irish one day a year.

Since its establishment in 1967, Northampton Community College is where students turn to earn a degree, access workforce training, learn new leisure activities, and bring their children for enrichment. Today, Northampton Community College has four locations to learn at:  Bethlehem Campus (Bethlehem Township), Monroe Campus (Tannersville in the heart of the Poconos), the Fowler Family Southside Center (Southside Bethlehem), and the Easton Center (Downtown Easton).